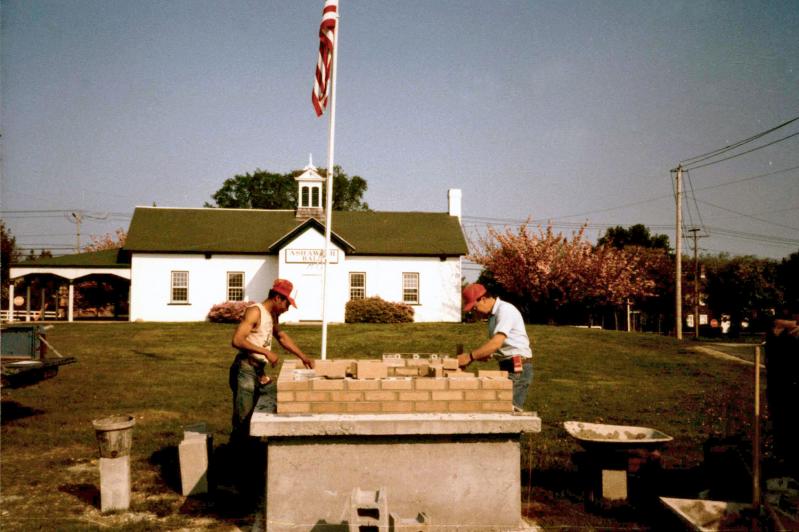 This image shows Lawrence Smith and Leander Arnold constructing the base of the veterans monument next to Ashawagh Hall in Springs. The monument was officially dedicated on Memorial Day weekend in May 1989.

The photograph is one of several from the Springs Historical Society's collection documenting the masonry work involved in constructing the monument between March and May of 1989. In addition to that work, done largely by Mr. Arnold and Mr. Smith, also helping out on the monument were Ken Kent, Beckwith Anderson, Alex Danyluk Jr., Wilbert Frazier, and Kevin Rawnsley.

Two plaques were added, listing the names of Springs residents who served in the Korean and Vietnam Wars, with a double asterisk noting one who was killed, Edward Reney. The monument also included veterans of the Civil War and both World Wars.

A previous veterans monument was taken down in December 1988 to make way for the new one. For years, veterans from World War II were honored with a sign in front of Dan Miller's store (which became the Springs General Store), and the monument taken down in 1988 honored those who had served earlier.

The Memorial Day 1989 dedication drew a crowd of 200, along with a Coast Guard color guard who marched from the bridge over Old Stone Highway to the green at Ashawagh Hall. Speakers included Karl Schaefer, Clifford Hildreth, Joseph Ricker, John Behan, the Rev. Frederick Schulz, and Donald Walsh, a chaplain.

Veterans in the crowd from World War II, the Korean War, and the Vietnam War were invited to take carnations distributed by local Girl Scouts and place them at the base of the monument. At the end of the ceremony, the national anthem was played and there was a gun salute.