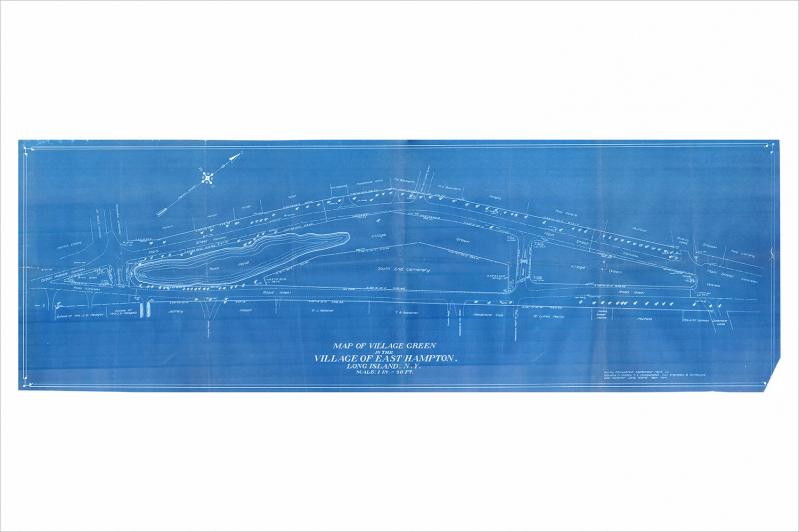 This Map of the Village Green is from the Ladies Village Improvement Society's archives. The map was drawn by Wallace H. Halsey, using a survey completed in September 1928. The plan includes the roads, light posts, cemetery, and Town Pond. Town Pond is currently undergoing an extensive project to excavate sediment and dredge it, in part due to the pollutants that drain from Town Pond into Hook Pond.

In June 1653 the town ordered the creation of the pond, supervised by Ralph Dayton and Thomas Baker, at the center of the five-year-old village. By the 1880s the area was marshy, and the pond overflowed into the road during heavy rains. While some proposed filling in the pond to create a park in the 1890s, the artist Thomas Moran, whose home overlooked the pond, felt differently. Moran actually piped water from his rooftop windmill to increase the pond's water level.

The L.V.I.S. funded the original bulkhead, for $3,600, contracted by A. B. Pugsley on May 27, 1963. The project seems to have been planned for years, as the society's archives include a September 1943 drawing from G.H. Bass. By July 8, 1963 the bulkhead was complete, and the surrounding area was filled in and reseeded, per Mrs. Marjorie Kennard's report at the L.V.I.S. meeting. By 1973, the bulkhead was rotting and needed repairs, but the East Hampton Village balked at the cost, and the L.V.I.S. again became involved in funding the much slower bulkhead repairs.

In 1974, the L.V.I.S. successfully nominated the Village Green for the National Register of Historic Places, formalized in 1975. The society also regularly funded landscaping for the Village Green in the 1970s. In February 1976, Mrs. Kennard reported a conversation about maintenance and pollution of Town Pond at an L.V.I.S. meeting, describing how the village refills the pond to cover the bulkhead in water, if the water level falls low enough to make the bulkhead visible.

The L.V.I.S. archives are a testament to the community efforts that have gone into the upkeep, maintenance, and preservation of our Village Green and Town Pond.

Petition to Speed Up Sand Replenishment in Montauk
Artistic Portraits of M.L.K. Up for Auction on Saturday
Wine Tasting for Lions Club
END_OF_DOCUMENT_TOKEN_TO_BE_REPLACED