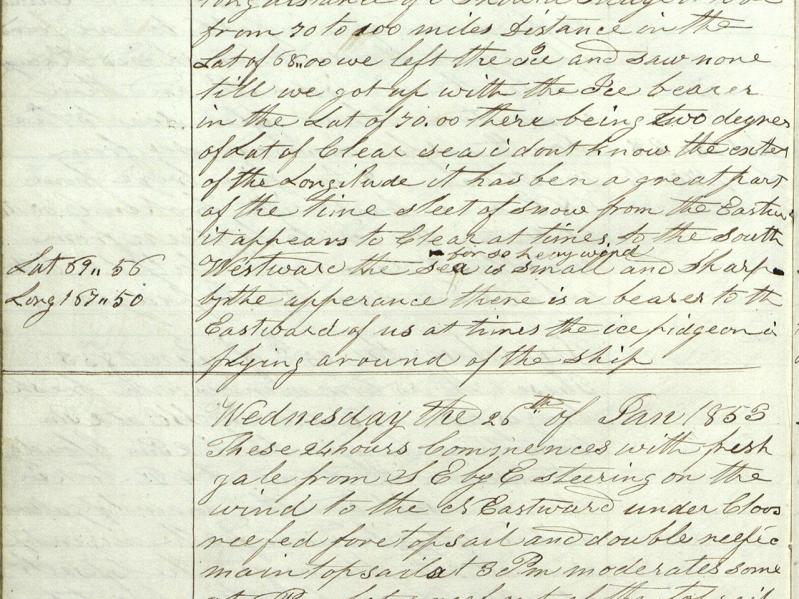 Not many people can say they have been to Antarctica, but can you imagine sailing there on a wooden ship with cloth sails, navigating by compass and stars?

Cooper kept the log as his account of the voyage. It's part of the now fully digitized whaling logs of the Long Island Collection, and one can follow Cooper and his crew from Honolulu to Christmas Island to the Ross Sea off Antarctica. The historic moment on Jan. 26, 1853, when Cooper became the first American to land at Antarctica, is included in this log. Frequent references to icebergs and icy decks are brightened with reports of penguins, porpoises, and sea lions. Occasionally, a drawing of a whale, a ship, or an island appears in the margin next to an entry.

Cooper's reputation as a seafaring trailblazer was already well established before he reached Antarctica. He visited Japan in 1845 as captain of the Manhattan, when the shogunate made an exception to their isolationist policies and allowed him to land after he had rescued shipwrecked Japanese sailors.

The Levant's travels are only slightly more fascinating than the passengers. The ship initially carried another whaling captain's wife and children as passengers, along with many Portuguese sailors. At later points, many Chinese passengers are referenced. The log is incomplete and ends on the way to Hong Kong, but Judith Lund's "American Offshore Whaling Voyages" says the Levant returned with 12,560 pounds of baleen.

Cooper married twice and had two surviving children. His former residence was used for many years as the Rogers Memorial Library in Southampton.