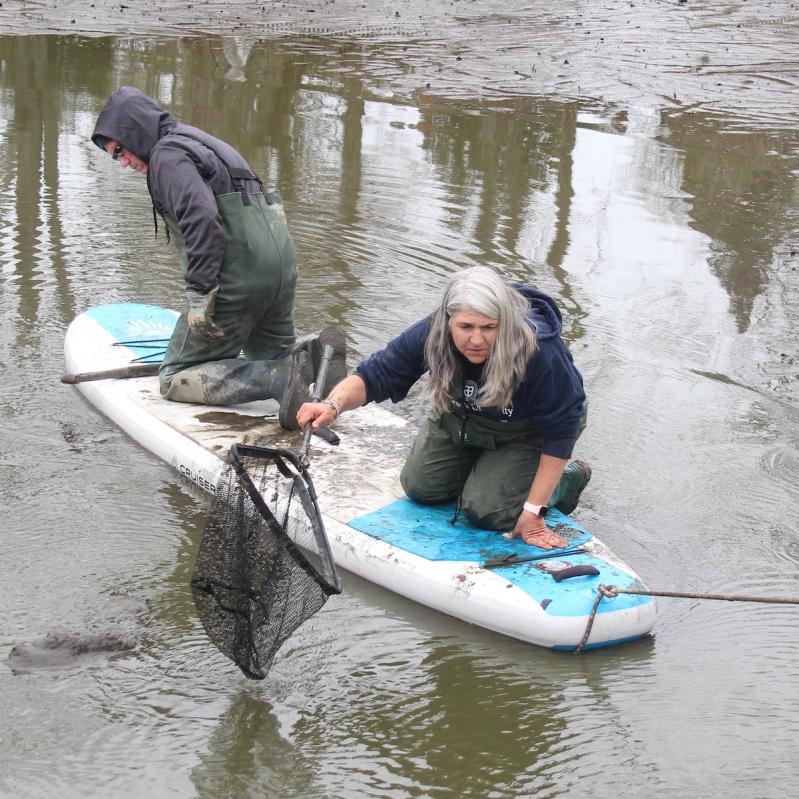 East Hampton Village temporarily stopped the dredging of Town Pond on Saturday to allow for the safe removal of turtles.

The first phase of the dredging, conducted by Bistrian Materials, began last month. Billy Hajek, the village planner, told the village board on Feb. 19 that more than three feet of "muck" had been removed, and there had been no reports of wildlife being harmed during the work.

The Turtle Rescue of the Hamptons organization informed Mayor Jerry Larsen on Saturday that the group had recently spotted turtles in the pond. They asked to have the dredging delayed so that other turtles, including hatchlings, could be safely removed.

Mayor Larsen convened a meeting that day with the group, Mr. Hajek, other village officials, and Dell Cullum, a local wildlife rescuer, to come up with a plan to extricate the turtles.

During the dredging thus far, the Bistrian firm has had a wildlife spotter on site, Mr. Hajek said at the meeting. "If they came across wildlife, they were supposed to pick it up, put it in a bucket and . . . release it in Hook Pond, that was the plan," he said.

"There's been turtles out there the past week," said Lisa-Jae Eggert, a member of the rescue group.

Mr. Larsen agreed to halt the dredging, and asked Mr. Cullum to oversee the rescue, which began on Sunday. A painted turtle was found that day. "Today, in conditions that weren't favorable to our efforts, we managed to rescue the first turtle and a dozen fish that included two beautiful koi," Mr. Cullum wrote on Facebook.

The effort will continue this week, and Mr. Larsen has scheduled another meeting with the group for Thursday to determine if more time is needed.

"I'm glad that the village is so receptive," Karen Testa, a member of the Turtle Rescue of the Hamptons, said on Sunday. "East Hampton is much more environmentally aware than other places on Long Island."

Petition to Speed Up Sand Replenishment in Montauk
Artistic Portraits of M.L.K. Up for Auction on Saturday
Wine Tasting for Lions Club
END_OF_DOCUMENT_TOKEN_TO_BE_REPLACED