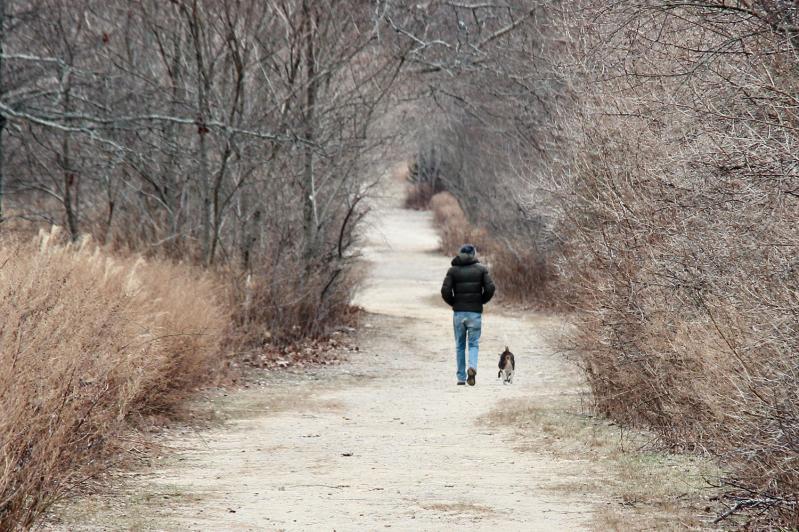 East Hampton Town's Springs Park may not be an official dog park, but it has evolved into a beloved destination where dog owners take their pets for off-leash recreation.
Durell Godfrey
By Christine Sampson

When Loring Bolger asked on the "Springs Dog Park" Facebook page last month whether changes were necessary at the park, the reply was a loud chorus of dog owners howling in opposition.

The Springs Citizens Advisory Committee chairwoman said she was simply trying to gauge public opinion on whether the park — which is not officially a dog park according to its East Hampton Town land management plan, but is heavily used in that way — should be sectioned off into areas for big dogs and small dogs with a children's playground and jogging track added on.

"I wanted some comments for our meeting, and I got 67 emails like 'boom,' of people giving me their opinion and getting angry at me for bringing it up, the whole nine yards. It was crazy, but that's okay," Ms. Bolger said Tuesday. "They all thought for some reason that the park was going to be taken away. Nobody said that, of course."

Anecdotally, there had been reports of fights among dogs, of younger dogs bothering old dogs, and of rowdy pups frolicking so hard they knocked people over.

"The Springs Park is a treasure. It's the most popular park in town," Kathee Burke-Gonzalez, the East Hampton Town councilwoman who is liaison to the Springs committee, said in an interview this week. "We're not looking to change anything, but when town staff tells you there's a safety issue, as a town board member it's incumbent on me to look into that and see how we can rectify that."

East Hampton Town's Animal Control Department could not be reached for comment this week, but its most recent online report shows that town-wide, in 2019 there were 1,041 complaints about dogs, which was almost double the 547 complaints recorded in 2018. There were 55 summonses issued to dog owners and four hearings on cases involving "dangerous" dogs in 2019, up from 35 summonses and one hearing in 2018.

"I have not had a negative experience in a long time," said Lori Marsden, a resident of East Hampton Town for more than 30 years who has three dogs of her own and a professional dog-walking business. "I hear about things periodically. Someone will come in with a dog that doesn't get along with other dogs and they don't understand that. . . . I think for the most part, it miraculously works pretty well for most people. It's big — that's the great thing about it. There's a lot of space and you're not all over each other. If someone has a dog that is cranky, there's enough space and it's pretty easy to avoid people if you want to do that."

The Jan. 26 virtual meeting of the Springs Citizens Advisory Committee, eight days after Ms. Bolger posed that question on Facebook, drew more than 90 people, most of whom were not members of the committee itself, but rather people interested in the dog park debate. The nonmembers were not permitted to speak at the meeting, which irked many.

"It didn't seem to accomplish that much," Ms. Marsden said. "It was very 'Thornton Wilder.' "

Ms. Bolger, who herself has a dog, said it was necessary to mute them because "with that many people in attendance . . . there was no way that I could have that many people putting their two cents in. The dog people are a very vocal group."

Neil Kraft, a dog owner who watched the meeting, said in an email that one of his takeaways was that "there is no problem with the current park, but we would like to endlessly discuss the nonproblems."

"I strongly support keeping the dog park exactly the way it is," he wrote. "Any reported problems have to do with people breaking the posted rules: letting puppies harass older dogs, people with aggressive dogs who are in denial, unfixed dogs in the park."

The nearly 42-acre, fenced-in park property on the east side of Three Mile Harbor Road used to be a horticultural nursery. It was purchased by East Hampton Town in 2002 using money from the Community Preservation Fund. Its official 2009 land management plan says the town board at the time "resolved to use the parcel for open space preservation and possible future use for sports and active recreation. Members of the community were not enamored with the idea of ball fields and lights, so the town board heeded the people's wishes and allowed the space to evolve naturally."

Theresa Collins, another resident who uses the park, described it as "a really happy place."

"You've got this place of peace and generosity and hospitality. It's not without incident, but it's generally happy — not a hotbed of safety incidents," Ms. Collins said by phone this week.

In 2009, town officials recognized one of the most pressing issues at the park wasn't unruly pups or poop that isn't picked up, but rather an invasive plant species known as the autumn olive. According to the Nature Conservancy, the plant is native to Asia and was widely introduced in the United States in the 1950s to control erosion with their sturdy roots. However, the organization says, the autumn olive "is a problem because it outcompetes and displaces native plants."

Ms. Burke-Gonzalez said on Tuesday that the issue is not that there needs to be a change of use or rules at the park, but rather a concerted effort to get rid of the autumn olive plants, which obstruct views in the park.

"As they have become a major problem, owners can't keep an eye on their dogs," Ms. Burke-Gonzalez said. "It wasn't much of an issue when the town acquired the property because back then there were a lot of grasslands. With the help of people who use the park, we were going to rid the park of this blight — this would be an ongoing stewardship. For some time, the Land Management [Department] and volunteers took this project on, but it's much bigger than a volunteer project at this point."

Ms. Burke-Gonzalez has proposed forming a Springs Park committee to make recommendations on how to deal with the autumn olives and get a handle on other issues that may arise.

Observers have said there are more people using the park now because of Covid-19 — and the related phenomenon of the "pandemic pet."

"It's heaven for them because it's got everything a dog likes," Ms. Marsden said. "There are other dogs there, there are thickets of bushes where there are vermin they can run after, and there's plenty of space for them to really run. A lot of dogs live in small, enclosed places where they can't really run."

This story has been updated to clarify that the Animal Control statistics pertain to the entire town, not just the Springs Park.