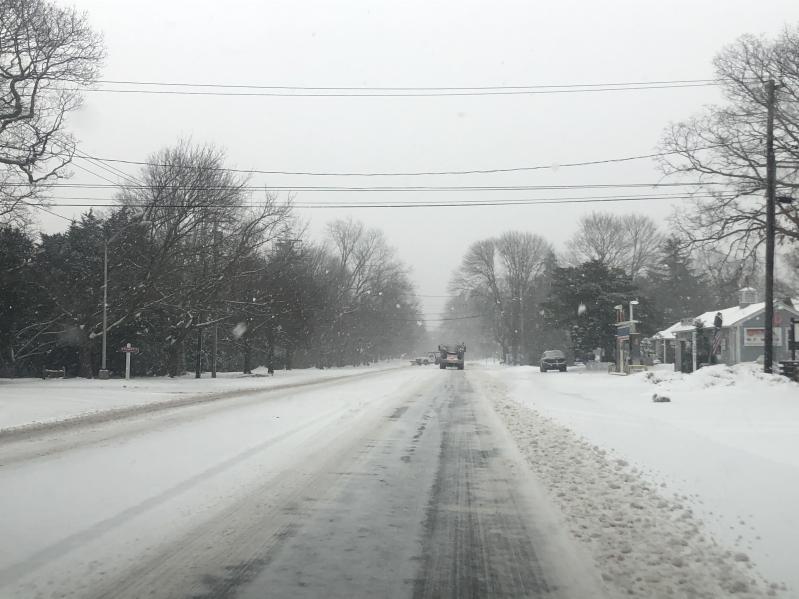 Roads were slick on Thursday afternoon before plows and sanders made their way across town.
Christine Sampson
By Star Staff

With a winter weather advisory in effect until Friday night, East Hampton and Southampton Towns closed all town facilities early on Thursday and East Enders were being warned to stay off the roads.

“We want to make sure all employees and the general public remain safe,” East Hampton Town Supervisor Peter Van Scoyoc said at the conclusion of the town board's meeting on Thursday afternoon. He advised residents not to go out unless it is absolutely necessary.

A powdery snow that began falling shortly after 9 on Thursday continued to accumulate through the afternoon. The National Weather Service predicted accumulations of three to five inches on Thursday, with total snowfall reaching four to seven inches by the end of the day on Friday.

A high of 29 and a low of 28 were forecast on Thursday. Friday's high is predicted to be 36 degrees. The Weather Service also issued a small-craft advisory, anticipating winds out of the northeast at 15 to 25 knots with wind gusts up to 30 knots and seas four to seven feet.