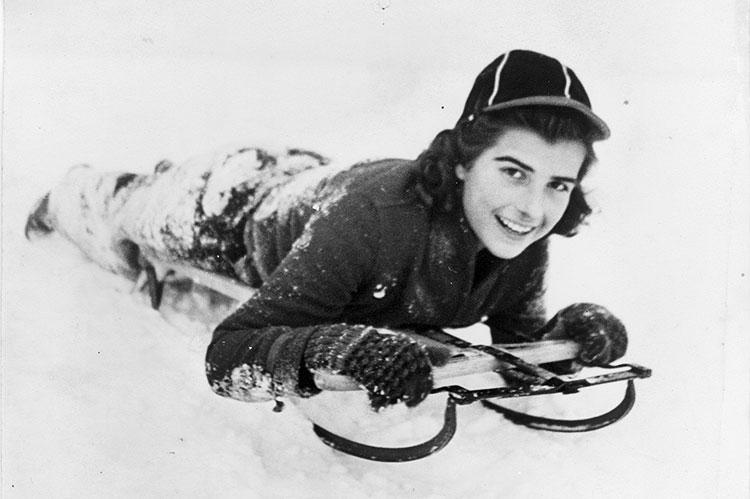 In this photo from January 1938, Norma Edwards appears lying on a sled, with mittens and a hat, half covered in snow at 13 years old. The photo is part of the Carleton Kelsey Collection, digitized in partnership with the Amagansett Historical Association.

Norma Mae Edwards grew up on Fireplace Road in Springs. She was born on May 30, 1924, to Alice Look Edwards and Irving Lane Edwards. Norma was an only child, but she had two very close childhood friends from her neighborhood: Judith Miller and Alice Miller (Rogers). In her oral history, Norma shared a picture from 1934 of herself and her friend Alice Miller sitting on a sled that looks like the one she's using in this photo.

The reverse of the photograph bears a stamp from Earl Gardell, an enthusiastic amateur photographer whose family ran one of the local dairies. The location where Norma posed on the sled is not clear, but the note on the reverse reads "Golf Links at Night." Multiple golf courses were open locally by 1938, but it's most likely the closest golf course would have been the Maidstone Club. There's another photo in the Carleton Kelsey Collection of Norma in the same outfit, standing up with a snowy open area behind her.

In the years following this picture, Norma went to nursing school at Bellevue Hospital in Manhattan after completing high school locally. She worked in the hospital for almost a decade, including many years in the emergency department. While working in the city, she resided in the hospital's nurses' residences.

In 1943, she married her high school boyfriend, James Corwin, who was killed during World War II only a few weeks after their wedding. Norma later married Philip Marder, a dentist, with whom she had three children. Norma returned to her family's house in East Hampton to raise her children, continuing to work as a nurse. Norma and her family remain active in the community.

Andrea Meyer, a librarian and archivist, is the head of the East Hampton Library's Long Island Collection.