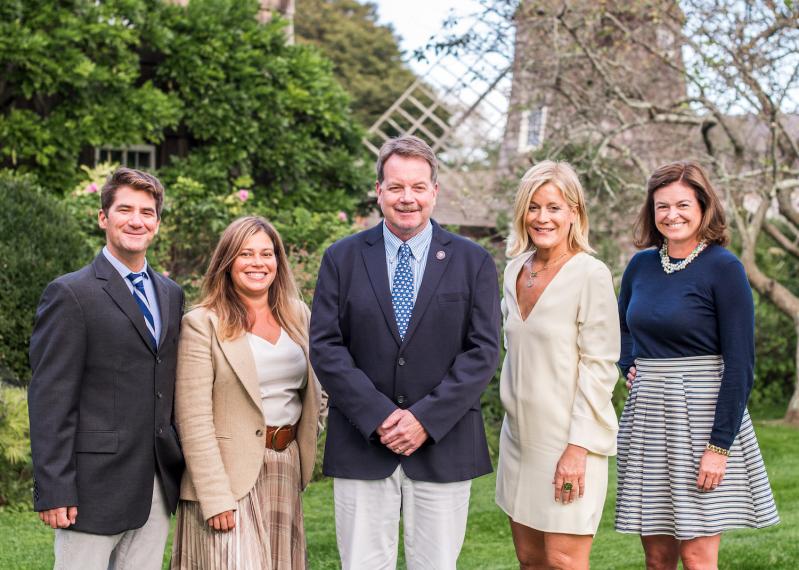 Sarah Amaden has declared her intention to run on the NewTown Party ticket for one of the two East Hampton Village Board seats up for grabs in the June 2022 election.

The seats are now held by Arthur Graham and Rose Brown. Mayor Jerry Larsen launched the NewTown Party for his mayoral bid, and the party holds a majority on the board with Chris Minardi, deputy mayor, and Sandra Melendez, a trustee. In August, Carrie Doyle, a member of the Zoning Board of Appeals, joined the ticket as a trustee candidate.

Ms. Amaden, who would be a newcomer to village government, said she decided to throw her hat in the ring out of a sense of civic duty. "The village has given me a lot, I've raised three kids here, the community is wonderful, and I have the time and energy to jump in and continue to make the village a better place," she said. "I feel like my heart and head are in the right place, and I'm not a politician, so I don't want to get into all the ugly kind of stuff that can go on."

She has previously served the community through volunteer work with groups such as the Ladies Village Improvement Society, the East Hampton Garden Club, the East Hampton Food Pantry, and the Parent Teacher Associations at the John M. Marshall Elementary School and the Middle School. A breast cancer survivor, she has also volunteered at the Fighting Chance cancer counseling center.

Covid-19 has curtailed many of her activities, however, and she said she is looking to find more ways to give back. "I have a clear plate now, and I want to fill it up with meaningful things like running for trustee, volunteering again at Fighting Chance, and I want to help out with I-Tri," the organization that seeks to empower adolescent girls.

Ms. Amaden was eager to join the NewTown Party, she said, because "I love the direction the village is going in. I love that they're doing the beach concerts, the farmers markets, the centennial celebration, and a Halloween festival. There's stuff happening here, and I feel like before there was no heartbeat."

"I like the pro-business approach," she said of the party. "I have three kids, and I don't know if any of them will come back to live here, but if we're not pro-business and if we don't keep an open mind, then no young person is going to be able to come here and start a business."

At a time when some of the village's highest-profile businesses, including Mary's Marvelous, Babette's, and John Papas Cafe, have either closed or plan to do so soon, creating an atmosphere in which new businesses can thrive will be key, she said. "I remember being in mourning after the Barefoot Contessa closed, because that was my daily routine, but people always step up to the plate and start something new."

Creating new ways for village residents to connect will be a major priority if she is elected, she said. "Growing the community spirit is what's really important to me. At the end of the day, you can live in a beautiful house, and have a beautiful beach, but everyone wants to be connected." To that end, she would like to see the village open a welcome center that could offer helpful information to both summer visitors and full-time residents. "I get, like, a hundred texts every summer from people, asking questions like 'Where can this kid work?' or 'What doctor should I use?' or 'Where can we volunteer?' Wouldn't it be great if we had a center where someone can come in and sign up to volunteer at the food pantry?"

Although Ms. Amaden is informed about many of the issues facing the village, she admits that she has some boning up to do. "I'm a newbie, but I'm learning and I'm willing to learn," she said. She has some worries about stepping into the public eye, but is determined to overcome them. "I can't let fear hold me back, because you have to serve the community. I'm just going to put my best foot forward and try."

And if she does get elected, she won't be afraid of saying exactly what's on her mind. "I have a hard time hiding what I really think, so if I don't agree with something, I would definitely speak up," she said.