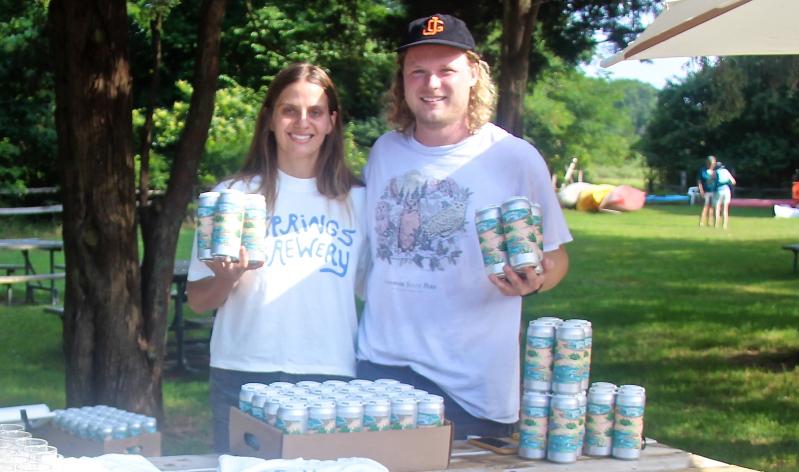 The owners of a new locally made beer business are seeking to convert a longtime auto repair shop in Springs into a brewery and taproom with outdoor seating.

Lindsay Reichart, a Springs native, and Gunnar Burke, the owners of Springs Brewery, which debuted its first cans of beer in August at the Springs General Store, want to change the use of a 2,680-square-foot one-story building that is home to Hampton Auto Collision on Springs-Fireplace Road, next door to Springs Pizza. Ms. Reichart’s father, Randy Reichart, owns the existing business. They are proposing to renovate the structure to create a brewery, a taproom with 20 seats, a 520-square-foot outdoor patio with four picnic tables, a cold storage room, and a pallet storage area. They also want to increase the number of parking spaces from eight to 19, 12 of which would be on two neighboring parcels used by Springs Pizza.

During a preliminary site plan review by the East Hampton Town Planning Board on Oct. 6, Ms. Reichart said the hamlet would be the ideal place for the proposed brewery and taproom because it is “a place of craft and art, but also a very diverse and accessible place.” The brewery would serve “as a social condenser to bring the community together,” she said.

The change in use would require that a low-nitrogen septic system be installed on the property. Mr. Burke said the business is eager to be environmentally friendly and “rooted in sustainability. . . . Water usage is important to us,” he said. “We want to set an example for how to make [the brewing process] sustainable.”

Board members were largely in favor of the proposal, but had concerns about whether the 10,932-square-foot parcel could safely accommodate the business. Given the popularity of the Montauk Brewing Company’s brewery, “You could find yourself needing a lot more parking spaces,” said Sharon McCobb, who asked the applicants to provide a narrative about how the business would be run, including the hours of operation. Ed Krug asked them to formalize an agreement with the owner of the adjoining parcels to use the space for parking.

The number and design of the proposed parking spaces would not meet town code standards, according to Marco Wu, a planner, and Mr. Burke agreed to bring them into conformity.

Because the parcel is near the Springs Historic District, Kathy Cunningham, the board’s vice chairwoman, recommended adding vegetation to the perimeter of the parcel to screen the business and parking areas.

Despite the quibbles, board members made it clear that they were hopeful the project could move forward. “You would be an asset to the area, and I’m encouraged to see young people like yourselves working on something like this,” said Louis Cortese. “I really appreciate your aspirations, and sensibility towards the area. I want you to succeed, because if you succeed the Town of East Hampton, Springs, and everywhere else will be better off.”