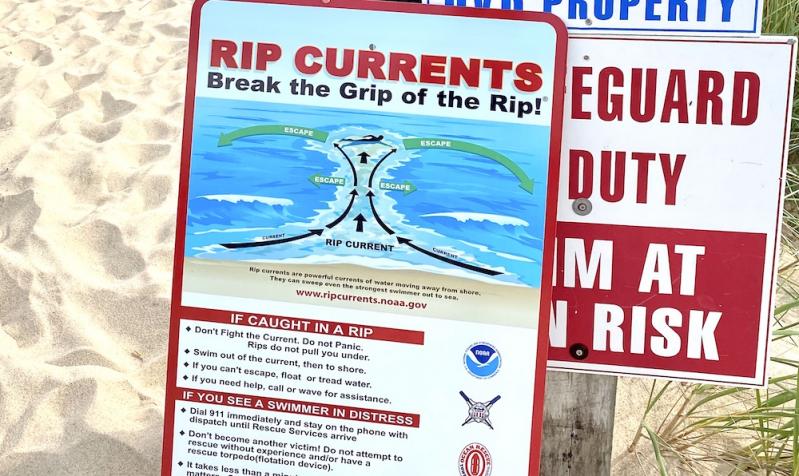 East End Ocean Rescue has rip current warning signs like these to donate to "any hotel, any private beach club, any private community" that wants them, said its founder, Jimmy Minardi.
Jimmy Minardi
By Bella Lewis

"That was interesting timing," said Jimmy Minardi as he answered a phone call this week. "I actually just pulled two people out of the water a few minutes ago." The East Hampton Village lifeguard and founder of East End Ocean Rescue had been patrolling Main Beach on Tuesday evening.

East End Ocean Rescue, which focuses on warning the public of the dangers of rip currents, recently donated 1,000 rip current cards, along with a warning sign, to the Ocean Vista resort on Napeague, which is near a stretch of beach where a Brooklyn man drowned earlier this summer.

Many of the Montauk beachfront resorts have the same owner as Ocean Vista, Mr. Minardi said, and the manager there, Pam Assonga, has promised to communicate with the owner about next steps for the others. East End Ocean Rescue "would be more than happy to donate a rip current sign" to "any hotel, any private beach club, any private community," Mr. Minardi said.

The organization began in the village, in the 1990s, with three people, and, by 2015, one warning sign at Main Beach. From there, signs have appeared at Georgica, Wiborg's, Egypt, and Two Mile Hollow beaches in the village, and at Beach Lane in Wainscott.

In addition to the organization's educational and preventive activities, there is another, similarly named group, East Hampton Volunteer Ocean Rescue, a state-accredited emergency response team whose 60-plus volunteers respond to water emergencies throughout the town, all year. These are both distinct from the paid lifeguards who protect East Hampton Village and East Hampton Town beaches during the extended summer season.

In his truck, Mr. Minardi keeps rip current cards with the same warnings as the signs. He gave some to the two swimmers he had just brought ashore. "Listen, if it was a normal September, I would not have to pull people, I would not be on patrol right now," he said.

"I have a couple of East Hampton guards checking on the beaches. It's warm out, and people want to go in the water." At the moment, paid lifeguards will be on duty at village beaches this weekend, and, depending on the weather, the next. "After that, regardless of the weather, that's it."

Mr. Minardi sees a direct correlation between Covid-19 and water safety. "It's much more of a year-round community now," he said, and with the population influx comes a greater-than-ever need to get as many rip current signs up as possible.

"The only reason they're here is because of Covid," he said about the people he had rescued minutes ago. "They told me that. I was like, 'What are you doing here?' And they were like, 'You know, well, I didn't go back to school, and I'm out here because of Covid.' It's a different animal."

One upside is that more people on the beach means more people who can swim or know how to make a rescue. "People are getting rescued before ocean rescue gets there," Mr. Minardi said.

"Do not panic," he advised. "If you can tread water, you'll get out of the rip." Never swim alone, he emphasized, and "always swim in front of a lifeguard. It's that simple. Know before you go."

No one is paid at East End Ocean Rescue and Mr. Minardi takes no compensation. He gets up every day at 5 a.m. to communicate with the National Oceanic and Atmospheric Association about the strength of the current and where the rips are, not because he has to but because he is passionate about the work.

"It takes 45 seconds to drown. There is no way for Ocean Rescue or even paid responders such as ourselves, for the village and town, to get there in time. That's why I went into preventive mode. You know what? The ocean is not a water park, and it's not a bay, and it's not your home swimming pool, and it's very unpredictable. We have tides, swells in the water, and rip currents can come up at any time."
--
Correction: An earlier version of this article incorrectly described the East Hampton Volunteer Ocean Rescue squad. That state-accredited team responds to water emergencies throughout the town all year long. Separately, there is no East Hampton Town Ocean Rescue program, per se, as stated in the article, but rather paid lifeguards who work at East Hampton Town and East Hampton Village beaches.