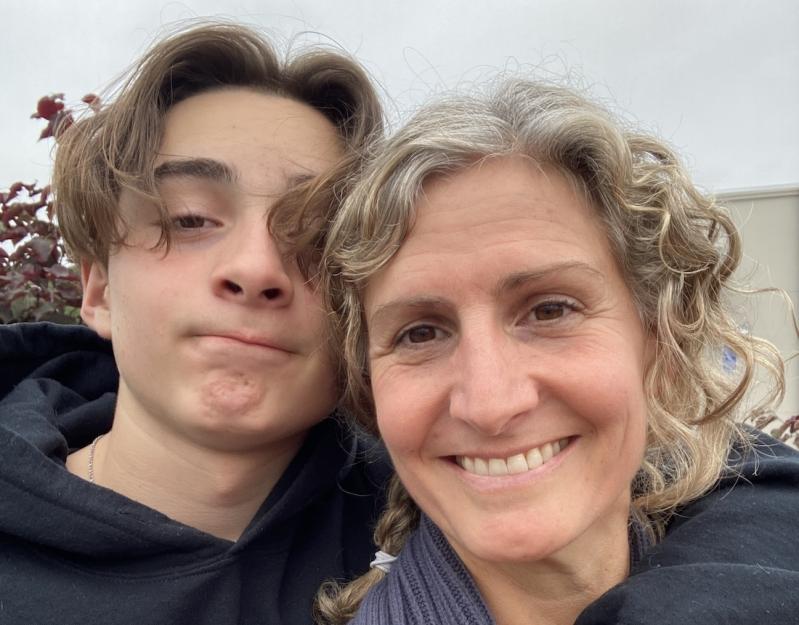 Padma Borrego, right, and her son Mateo are rebuilding their lives after a California wildfire claimed much of their belongings.
Padma Borrego
By Christine Sampson

Padma Borrego and her son, Mateo, started a new life in California in 2018 after leaving the East End, where Ms. Borrego had been a yoga teacher and bodywork practitioner and Mateo was a student at the Hayground School. Just as they were getting on their feet in a new home, life threw a wrench in their plans in the form of a raging wildfire that claimed their home and their possessions.

"We're okay. It's up and down," Ms. Borrego said in an interview last week. "It's challenging. We're safe; we have good friends. But it's definitely intense."

On Aug. 15, the day they moved in with friends in Bonny Doon, Calif., lightning struck nearby during a storm. Their house lost power. By Aug. 19, a huge wildfire was moving quickly through the community. They evacuated from their new home in the middle of the night, escaping with some clothes, their computers, their cat, and a cellphone.

The Santa Cruz Sheriff's Office reported Monday night on Twitter that the fires in that region have been 80 percent contained, though they had already impacted more than 86,500 acres of the mountainous area. The Santa Cruz Sentinel reported that day that temperatures over 100 degrees along with dropping humidity continued to make firefighting conditions extremely difficult.

Since their belongings and house were destroyed, a GoFundMe crowd-funding campaign has been set up to help Ms. Borrego and her son. Their critical need is stable housing somewhere near Mateo's school in Corra-litos.

"Most of it is replaceable but there are things that are not. . . . All of our photos, especially photos of my mom. Things I had of hers that kept me feeling close to her and reminded me of our family, her history, my history," Ms. Borrego wrote on the online fund-raiser page.

It has raised more than $15,000 in two weeks, with many contributions coming from friends on the East End. The page can be found at gofundme.com by searching for "Padma and Mateo Borrego."

Julie Fanelli, a teacher at the Hayground School, said she knows the Borregos as a "sweet, kind family."

"Mateo was always a gentle and sensitive kid. He had many friends and was very active. . . . I can't imagine what he and Padma are going through, having lost most of their belongings and their home," Ms. Fanelli said in an email to The Star.

"People should absolutely contribute if they are able. Many families are in need, but if we can help even one, we will make a huge impact on their lives," Ms. Fanelli later wrote.

Asking for help is challenging for Ms. Borrego, but she is used to facing difficulties. " 'Padma' means a lotus flower rising up out of adversity and into a blossoming, a different form of consciousness coming out of challenge," she said. "Support coming through the community is important."