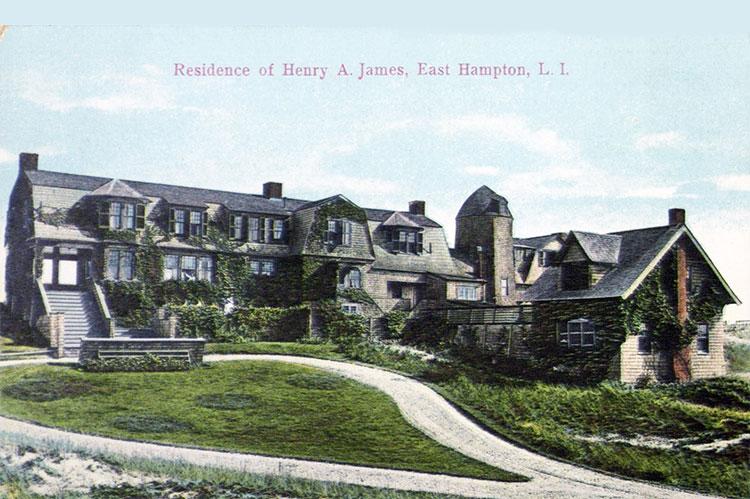 This postcard from the East Hampton Library's Harvey Ginsberg Collection shows the home of Henry A. James (1854-1929), a pioneer of the summer colony here. The house, however, should be named for Henry's wife, Laura Brevoort Sedgwick James (1859-1907).

Originally from Stockbridge, Mass., Laura hailed from the noted Sedgwick family, whose American roots date to the 17th century. Laura commissioned the architect Joseph Greenleaf Thorp to design the house and hired George Eldredge, a builder, before meeting Henry. The same team, Eldredge and Thorp, completed the addition in 1894 and added the windmill tower visible in the middle of the house in 1899.

According to his obituary in The East Hampton Star, Henry James arrived in the summer of 1891 and returned every summer until he died. That first summer, he met Laura, who was living with friends in the house she built near the intersection West End Road and Apaquogue Road in the Georgica dunes. By the end of September, Laura and Henry were married, either in New York, as their marriage license says, or in the living room of Laura's East Hampton house, as Henry's sister Amy James Newton remembered in 1935.

Henry Ammon James split his time between New York City, where he worked as a lawyer, and East Hampton, where the family he raised with Laura played a prominent role in the social scene. Henry's sister Amy and her husband, Francis Newton, added to the family's social presence, and Ellery James, Henry's son, continued the family tradition, building a landmark house in East Hampton.

Henry served as the first president of the East Hampton Electric Light Company. Amy recalled his foresight to bury power lines, now understood as a more storm-resistant choice. At the time, Henry's decision reflected a desire to preserve the natural beauty of the area and prevent the arrival of trolleys.

Henry and Laura's home still stands, although it is better remembered for its later residents. In 1935, Juan Trippe (1899-1981), president of Pan Am Airlines, bought it and undertook significant renovations. The Trippe family sold the house in 1987 to the fashion designer Calvin Klein.

Andrea Meyer is the head of the Long Island Collection at the East Hampton Library. She can be reached at [email protected].