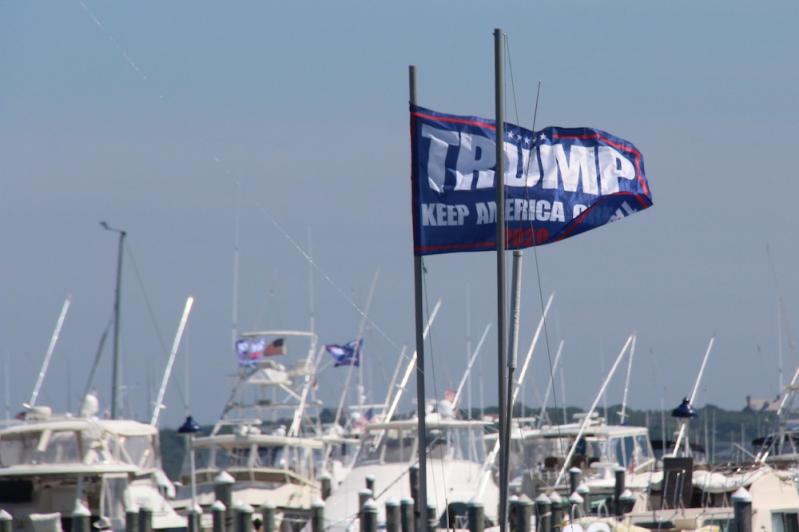 A boat flying the Trump 2020 flag at a marina in Montauk this week. Boaters joining the TrumpStock boat parade on Friday have been challenged to deck out their boats in patriotic and Trump regalia for a chance to win an in-person visit with the president when he visits the East End this weekend.
Durell Godfrey
By Christopher Walsh Carissa Katz

President Trump will visit the South Fork on a fund-raising trip that will include in-person events on Saturday, but even before he arrives, supporters will be out in force to give him a warm welcome.

Events are to begin today with Donald Trump Jr., the president’s eldest son, and his girlfriend, Kimberly Guilfoyle, attending a dinner, CNBC reported. Tickets are priced between $2,800 per person for a reception and $50,000 per couple for a corresponding dinner.

Mr. Trump and Ms. Guilfoyle own a house in Bridgehampton. She is the national chairwoman of the Trump Victory finance committee.

Tomorrow, boating Trump supporters have been invited to join in a TrumpStock boat parade organized by the Boaters for Trump, which describes itself as a group of "passionate boaters who proudly support and promote President Donald J. Trump." Similar events have taken place across the country, including one on the Great South Bay on June 27 that the group said drew more than 3,000 boats and at least 15,000 people. Tomorrow's event was originally set to start at Orient Point, but "due to the amount of boats expected to attend, we needed to expand our parade," the organizers wrote on Facebook.

"We've seen them all over the rest of the country and we're getting one going here," Donald Trump Jr. says in a video posted on the Boaters for Trump Facebook and Instagram pages. Ms. Guilfoyle appears alongside him in the video.

Participants in the parade will gather in Noyac Bay at 11 a.m., travel to the Orient Point Lighthouse by 1 p.m., and then head to the Montauk Point Lighthouse by 3 p.m. Two boats will lead the fleet — Team Deplorable, a 63-foot sportfishing yacht, and a 42-footer owned by Carlos Gavidia of Jupiter, Fla., who organized the first such Trump flotilla on Florida's Intracoastal Waterway in May.

"We will take it nice and slow heading southeast towards the Montauk Light House," Boaters for Trump wrote in a post about the event. They promised that members of the Trump family would be in attendance. "Take your boat or get on your friend's boat, bring all of your flags and Trump gear to show everyone . . . how much we love and support our President!"

"There's going to be prizes for the most outrageous design," Donald Trump Jr. says in the video, and "that person is going to get to come see the president with us the next day on Saturday when he comes into town."

The event will end with a tie-up off the Navy Road beach on Fort Pond Bay.

"We are looking to avoid any form of overcrowding on the property . . . as well as any kind of bottlenecking / traffic from Shore Road to Navy Road and down the dead end road leading into Navy Beach which would both block our customers as well as the residents on Navy Road and create a potentially dangerous situation where emergency access is not available in and out of Navy Road," Ms. Marchetto wrote.

TrumpStock participants who raise the most money for the president's re-election effort individually and by "bundling" . . . "five or more unique contributions" will win prizes and a chance to have their photograph taken with President Trump on Saturday, Ms. Guilfoyle says in the video. Participants were to solicit contributions through noon tomorrow.

"It's going to be fun," Donald Jr. says of the parade.

Organizers have encouraged Trump supporters who live near the water parade route to cheer it on from the shoreline. They have advised boaters to launch early in the morning and to obey all maritime laws and social distancing guidelines.

The locations of Saturday's fund-raisers were not disclosed, but according to some reports the president will return to Joe Farrell's estate in Bridgehampton, also the site of a fund-raiser last summer. According to Newsday, "a source familiar with the planning of the event said entry is $50,000 per person or $100,000 for the opportunity to attend a roundtable discussion and meet-and-greet session with the president." CNBC reported on Monday that the president will attend “high-dollar, in-person fund-raisers,” including one on Saturday afternoon with tickets ranging from $50,000 per person to $500,000 per couple.

With less than three months until Election Day and his presumptive challenger both outraising him in the second quarter and leading in national and battleground-state polls, President Trump is looking to get a cash infusion on the South Fork. Last year, CNBC reported separately, Mr. Trump and the Republican National Committee raised at least $10 million through fund-raisers at the South Fork residences of Mr. Farrell and Stephen Ross, who owns the Miami Dolphins football team and whose company owns Equinox and SoulCycle.

As the Republican nominee for president in the summer of 2016, Mr. Trump attended a fund-raiser at the East Hampton residence of Robert Wood Johnson IV, now the United States ambassador to the United Kingdom and a co-owner of the New York Jets.