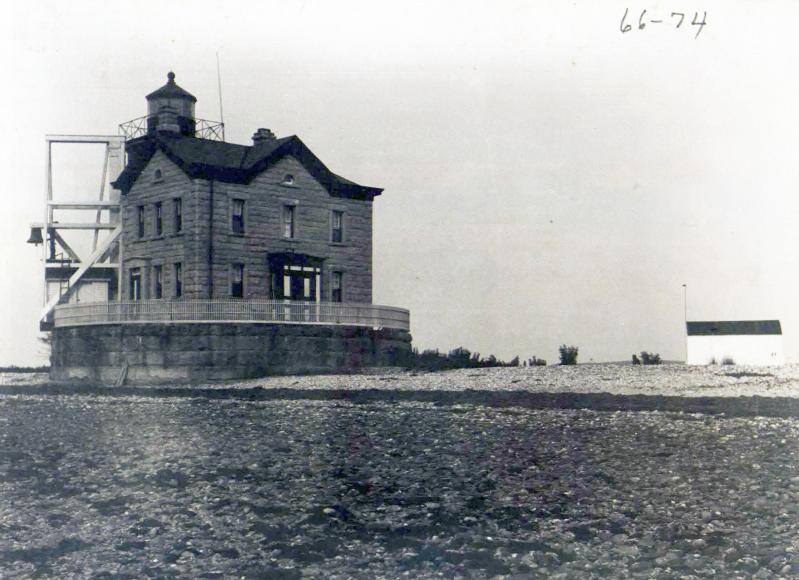 William Wallace Tooker (1848-1917), a Sag Harbor photographer, took this photograph of the Cedar Island Lighthouse sometime between 1868 and 1917. Before the lighthouse existed, whaling ships and vessels risked hidden hazards on their way into Sag Harbor, and a local captain, Joshua Penny, maintained stake lights to guide them safely past Cedar Island.

But then the government gathered $3,500 between 1837 and 1838 to finally build a lighthouse. Cedar Island was purchased from the Town of East Hampton for $200 on Aug. 20, 1838, and Samuel Eldridge started the construction. By January of 1839, the lighthouse was in operation. Frederick King became the lighthouse's first keeper, serving from 1839 to 1841.

Over the years the structure was damaged, and in 1867 Congress approved $25,000 to rebuild it. The new lighthouse, which is pictured here, was finished in 1869 and features Boston granite style architecture. Many additions and renovations were made during the following years, until the lighthouse was decommissioned in 1934. The Hurricane of 1938 helped stabilize the land the lighthouse stood on by forming a peninsula that connected the island to the mainland.

Isabelle Bradley, who was renting the property from Phelan Beale of Grey Gardens in East Hampton, bought it for herself in 1943. In 1967 it was sold to Suffolk County, which turned it into Cedar Point County Park. Sadly, the building was boarded up after the roof and interior were destroyed in a 1974 fire.

In the early 2000s the Long Island Chapter of the United States Lighthouse Society restored the oil house, a small shed-like building used to store oil for the light. Inspired by this success, the county authorized the society to restore the lighthouse. Restoration plans presented in 2017 call for converting the structure into a bed-and-breakfast.