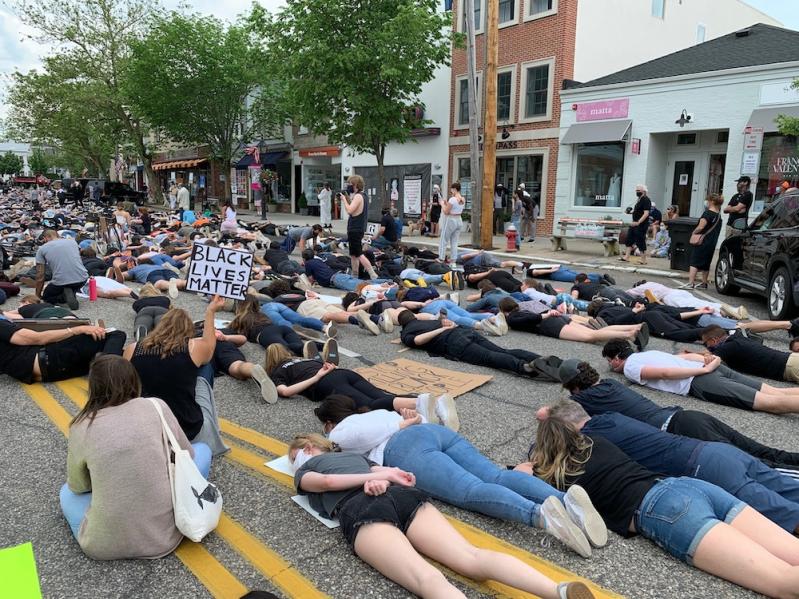 The mood was fiery and rebellious but also upbeat and confident on Friday as a huge crowd of young people, parents, and grandparents convened at John Steinbeck Waterfront Park in Sag Harbor to protest police killings of African-Americans and decry the ingrained and structural racism that perpetuates injustice and denies equal opportunity to all Americans.

The demonstration, which was impassioned but peaceful, was organized by college and high school students calling themselves East End Against Hate. It followed protests in Bridgehampton on Tuesday, Southampton on Thursday, and others across the country, some of which have resulted in more confrontations with law enforcement personnel. Another rally is set for Sunday at 2 p.m. at the Hook Mill in East Hampton.

Georgette Grier-Key, the executive director and chief curator of the Eastville Community Historical Society in Sag Harbor, exhorted those attending to maintain their focus and passion long after the recent spasms of outrage that followed police killings of African-Americans, most recently that of George Floyd in Minneapolis, have subsided. “When you have done yelling, losing your voice, and your feet hurt, what will you do? We still have work to do!” she shouted to cheers. “We have work to do! We have work to do!”

With students at her side, Dr. Grier-Key told the assembled that “You are graduating today in front of all of us, your community. We deserve a future. You deserve a future. The time is now. Equity now. We want change. We demand restorative justice. What does that mean? We want to dismantle all racist policies, structural racism!”

Today’s youth, she said, “has managed to do something that no other generation has been able to do, and that’s to get rid of you!” That collective “you,” she said, are all who accept exclusion and reject diversity, who look the other way, who do not take a stand against injustice. Under a cloudy sky, she said, “With no sun shining, it’s shining today, because today is a brand-new day! It is a brand-new day.”

After the speakers had concluded their remarks, the crowd marched across Lance Cpl. Jordan C. Haerter Veterans’ Memorial Bridge and back, proceeding to the village’s Main Street, where at one point they stopped to lie down, many with their hands behind their backs.