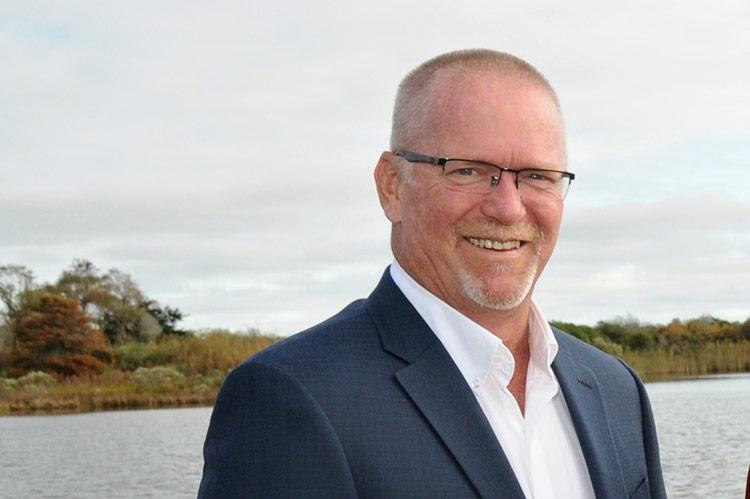 Ray Harden was sworn in Friday as the newest member of the East Hampton Village Board.
Richard Lewin
By Jamie Bufalino

East Hampton Village Mayor Richard Lawler appointed Ray Harden, a co-owner of the Ben Krupinski building company, as a village board member on Friday over the objections of two board members.

Mr. Harden was sworn in during the board meeting to fill a seat that has been vacant since January when Mr. Lawler, the former deputy mayor, was promoted by his fellow board members to fill out the final six months of the term of former Mayor Paul F. Rickenbach Jr. Mr. Rickenbach resigned from office on Dec. 31.

Prior to making the appointment, Mayor Lawler pointed to Mr. Harden’s credentials, including his service as vice chairman of the Zoning Board of Appeals, as a member of East Hampton Town’s licensing review board, and as former chief and current member of the East Hampton Fire Department.

“All those things make him eminently qualified for the position of village trustee,” Mr. Lawler said.

Mr. Lawler and Mr. Harden are both running for a seat on the village board on the Elms Party line. Barbara Borsack, the deputy mayor, is the party’s mayoral candidate. The election was scheduled to be held on June 16, but because of the Covid-19 pandemic, has been postponed until Sept. 15.

Mr. Lawler cited the pandemic and the election delay as reasons for filling the seat. If one of the trustees were to become ill, he said, it could threaten the board’s ability to govern effectively. And the seat could remain vacant even longer than September if the election is further delayed due to a resurgence of the virus, which “is a very real concern of medical experts,” he said.

Arthur Graham, a board member and candidate for mayor on the Fish Hooks Party line, and Rose Brown, his colleague on the board and in the party, voiced their opposition to the appointment, and called it an attempt to give Elms Party candidates a board majority, and Mr. Harden the advantage of incumbency in the election. “For a mayor, along with his fellow Elms Party mayoral candidate, to appoint their running mate to the board without the support of the other two trustees is nothing more than a naked power grab for total control of the board,” said Mr. Graham. “An unelected trustee appointed by an unelected mayor smacks of the kind of crony politics the voters of East Hampton Village should reject come the election in September.”

Mr. Graham was dismissive of Mr. Lawler’s rationale for the appointment. “We can manage effectively as four elected board members as we have done since the first of the year,” he said. “Were one of us to become incapacitated, we could consider adding a neutral trustee at that time.”

The last two trustees who had been appointed to the board, Bruce Siska in 2011, and Philip O’Connell in 2016, had been approved by a unanimous vote, she said. “Mayor Lawler was not elected mayor by anyone, he is an appointed mayor, and now appointing a trustee without a vote.”

“What is different now, what is the urgency, and why are we breaking this tradition?” she asked.

The move, she said, is “an attempt to influence the outcome of the future election,” and comes at a time when the board should instead be focused on “how best to serve the village as we deal with health, safety, and economic concerns and issues related to the virus.”

Ms. Borsack said she was in favor of the appointment because it would provide the board “with extra brain power in this difficult time,” and noted that Mr. Harden’s background in building would be helpful in guiding the reopening of construction sites in the village. “I don’t see it as a power play, because we don’t disagree on much,” she said, referring to her fellow trustees.

Jerry Larsen, a former East Hampton Village police chief and a candidate for mayor on the New Town Party line, called into the meeting, which was held by teleconference, to criticize the appointment. “This is the most contested election in village history. You have five people running for trustee, and I think this is wrong,” he said.

“You accuse me of playing politics, but some bystanders might say that other people are playing politics here,” said Mr. Lawler in response to the objections. Mr. Harden will not simply be a rubber stamp for Elms Party interests, he said in an interview on Tuesday. “I told him, ‘I don’t expect you to agree with me on everything; vote your conscience,’ and anybody who knows Ray knows that’s what he’ll do,” he said.

It is true that the appointments of Mr. Siska and Mr. O’Connell had been approved by unanimous vote, he said, but, at the time, the then-mayor, Mr. Rickenbach, had made it clear that he had the authority to appoint them even without the board’s approval. “Let’s just clear that up, because I was there,” he said.

Becky Molinaro Hansen, the village administrator, Beth Baldwin, the village attorney, and the New York Conference of Mayors also recently confirmed that he had the authority, he said.

The argument that he is only a temporary, appointed mayor, and should not be making such an appointment is “ridiculous,” he said. “The mayor is the mayor. I am the mayor, and I have to do what I think is right, which is exactly what I did. I’d rather be safe than sorry.”