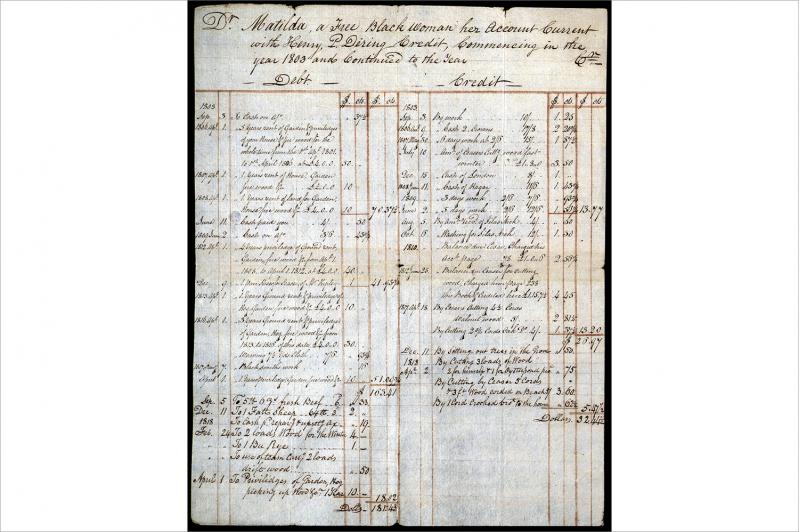 This account between Matilda, a freed black woman who had been enslaved by the Dering family until 1795, and Henry Packer Dering, Sag Harbor’s customs collector, runs from 1803 until 1818, and it is highly unusual.

Because women — and enslaved people — were not considered to have the same independent legal standing that white men did, it is uncommon to see a woman recognized in financial accounts and legal documents.
Matilda appears to have been freed as part of Thomas Dering’s estate in 1795. The process of freeing an enslaved person required proving that the person would be able to support him or herself, and that he or she was less than 50 years old, to prevent the person from becoming a public burden.

Even though the Overseers of the Poor concluded that Matilda could support herself, she had no money or goods of value when she was freed, and she needed to borrow $75 from Henry Packer Dering to build a house. This account begins after that initial loan was somehow paid off.

Matilda held no equity in the home she built, and she could not leave it to any heirs, so it was essentially a life estate — she owned it only while she was alive. In the 1790s, New York laws prevented enslaved people from owning property, and there was some legal question about whether formerly enslaved people could own property after manumission. Matilda rented the land where her house was built for $10 a year, which gave her use of the garden. Dering’s account also records small fees she was charged for weaving, blacksmithing, and the use of a cart.

Matilda and someone named Cesar, presumably a male relative or husband, paid their debts through labor and cash. The bulk of the payments on Matilda’s account came from “cutting wood.” Other people previously enslaved by the Dering family, including London and Hagar, also contributed cash toward Matilda’s account. Despite these shared efforts, after 15 years Matilda had earned only about $32.44. It is believed she died in 1818, still owing Henry Packer Dering $181.43.