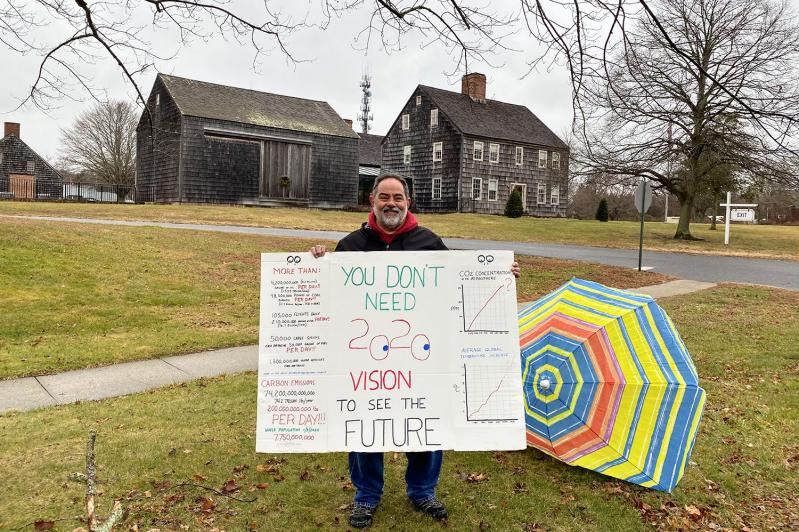 On Friday, the day that the Swedish climate activist Greta Thunberg turned 17, one of the legions she has inspired around the world staged his own climate strike outside East Hampton Town Hall, hoping in turn to inspire others.

Harry LaGarenne of Montauk spent around three hours of the damp morning holding a sign bearing sobering statistics about the greenhouse gas emissions that scientists warn are raising global temperatures and must be sharply cut to avoid catastrophe. Mr. LaGarenne said he was directly inspired by Ms. Thunberg, who began a weekly strike outside her country’s Parliament building more than a year ago.

“I’m just trying to energize some local people to join a growing global movement and hopefully raise our voices loud enough to be heard,” he said on Monday. Ms. Thunberg “has a message that is very pure and simple, and we need to pay attention. She has raised awareness of something people have been yelling about for a long time, but she awakened the youth,” Mr. LaGarenne, who is 66, said. He has listened to all of her recorded speeches, he said, “and each and every one gives me full body chills.”

“We’re in crisis right now,” he said. “We’re having a constitutional crisis — a crisis of democracy — and we’re having an existential crisis in global climate change, and now we’ve got some lunatic, because of unsound policies, getting ready to start a war! This is insanity, it’s madness.” He paraphrased the preamble to the Constitution of the United States: “We the people of the United States, in order to form a more perfect union . . . have to rise up and act. We have to make our voices heard.”

He said he has reached out to Aubrey Peterson, an adviser to East Hampton High School’s Environmental Awareness Club, about students joining his strike for climate. Last year, 14 members of that group staged a walkout to call leaders to action. “The awareness is now growing,” Mr. LaGarenne said. “We need it to keep growing, and become more and more powerful. We need a revolution, in my estimation.”

Mr. Peterson said on Tuesday that he had received a message from Mr. LaGarenne and would contact him.

Mr. LaGarenne said he would resume his strike tomorrow. “This is my voice joining with Greta’s,” he said. “We need to wake up, we need to stop. We need to look at what we’re doing, and we need to act now. This madness has to end.”