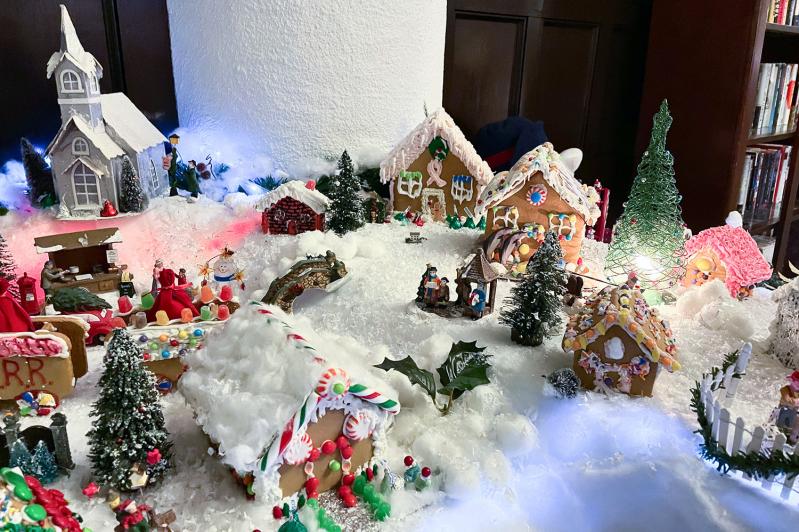 Patrick Lane, the head bellman, was appointed to act as "village planning board" to make the most extensive display yet.
Jane Bimson
By Bella Lewis

Christmas was Kathy Surrey's favorite holiday. Each year, Ms. Surrey, a longtime night manager at the Montauk Manor, would begin preparing for the holiday around Thanksgiving, turning out a dozen or more glorious gingerbread houses to display in the Manor's lobby.

Ms. Surrey lost her battle with breast cancer in March. In her memory, staff members at the Montauk Manor have carried on the Christmastime tradition she started.

"She was one of a kind and she did it out of the love of her heart," said Janice Nessel, the manager at Montauk Manor. "It's hard for us to talk about her. We miss her."

In addition to making 10 to 15 houses outside of work, Ms. Surrey would give supplies to children of employees so that they could make houses of their own. "No matter what it looked like she put it in" the display, said Ms. Nessel about the joy Ms. Surrey took in including others.

Usually the gingerbread village would take up one table in the lobby, but this year, Patrick Lane, the head bellman, was appointed to act as "village planning board" to make the most extensive display yet. "I thought we should do it really big this year," he said. He set out to build the village with attention to a sense of scale, from small to medium to large, from the most elaborate house down to the very smallest wisp of snow.

Connected gingerbread houses snake across four different tables, featuring Montauk Manor in a replica of the town, plus a lighthouse, "Hanukkah house," and more.

A special pink house in memory of Ms. Surrey has her photo surrounded by a pink ribbon, said Mr. Lane. Favorite details of his include little people skiing and a little log cabin. "It's as if Candy Land were a business district. We tried to represent the whole town."

Ms. Nessel said that the children of former employees, some of whom have not worked at the Manor for five to eight years, have dropped off gingerbread houses to add to the display, which is open to the public.

Anyone wearing a mask can go take a look, Mr. Lane said.

"It's charming to see kids looking at the village because they are eye level, so they have that extra sense of wonder," he said. Ms. Nessel said that Ms. Surrey's devotion to the project had always been about the children.

"But you have to prevent them from eating and touching it! There's something magical when you're there; it transports you to a simpler place with no Covid," said Mr. Lane.