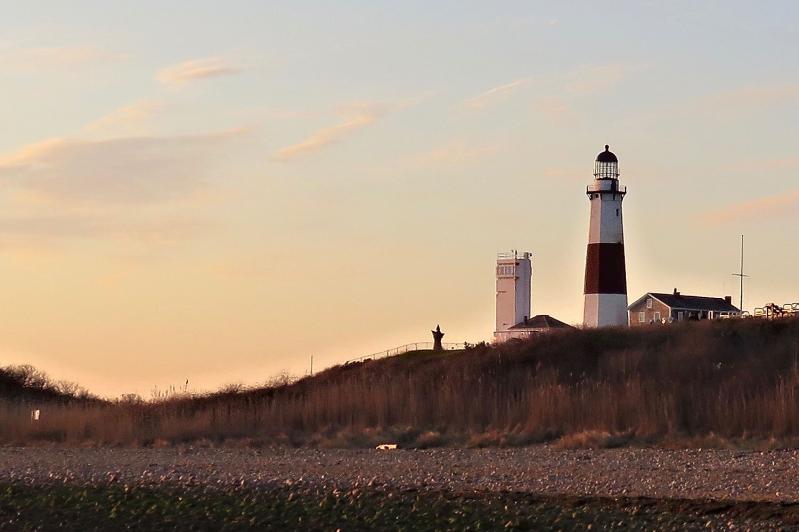 Each year for the past 12 years, the Montauk Historical Society flipped the switch on thousands and thousands of lights strung up at the iconic Lighthouse on the Saturday after Thanksgiving. A local community hero would be honored, there would be hot chocolate for all, and there would be a visit from a certain jolly old man in a red suit, who would wave to the crowd from atop the Lighthouse tower.

The relatively new but popular tradition is on hold this year for two good reasons, Joe Gaviola, the Lighthouse keeper, said in an interview last week.

In light of the Covid-19 pandemic there are safety measures at play, but the spotlight is also on the historic restoration project under way at the tower.

"We all have the heartaches of Covid and how it's affected us this year," Mr. Gaviola said. "We are unable to have a gathering of any kind here. We would have five, six thousand people for it and leave it lit typically until Jan. 4. Every night, I would see a stream of cars go by. Tens of thousands of people would come to look at it over that period of time. Because of Covid and because of the work we're doing on the tower, we're unable to string up the lights. It kind of fell together why we couldn't have it."

The construction work is "the most extensive restoration of the George Washington-commissioned Lighthouse since 1860," Mr. Gaviola said.

At a price tag of $1.3 million, and organized into three stages, the project is about a quarter of the way through the second stage, according to Nick Racanelli, a contractor who sits on the Montauk Historical Society's Lighthouse Committee. The structure "needed some T.L.C. -- tender love and care," he said.

The first phase was to fortify the tower against water that would seep in through cracks. It was "getting in between the walls, freezing and thawing, and causing contracting and bulging," Mr. Racanelli said by phone this week.

The second step is the repointing of the tower itself, which has six sides. Each seam is being ground out, and the joints are being restored with lime putty. The tower was originally built using such a lime putty mortar, but over the years it had been repaired with Portland cement instead.

"The lime putty has expansion and contraction characteristics to it," Mr. Gaviola said. "The Portland cement does not expand and contract. It's interesting how we've gone back now. There's over a mile of grinding to expose and go back to the original lime putty that was still in there and replace it."

In the third phase of the project, sometime in 2022, Mr. Racanelli said, the tower will be repainted in the familiar blocks of white and reddish brown.

"You would see all this cracking and some of the stones bulging out. It definitely was in need of restoration," he said. "Probably if we didn't do this, in time we would have had more significant problems. The restoration was timely and it's not only to make it look nice but also to preserve it for the next 200 years for people to enjoy."

There have been multiple challenges along the way, Mr. Racanelli added.

One of them "is to make sure that you logistically keep the patrons safe," he said. "We built a whole sidewalk bridge, kind of like what they do in New York City. We're protecting people walking around. That is really the biggest challenge."

The second big challenge, he continued, was "something that our restoration company didn't totally anticipate -- the severe weather conditions out there. . . . That tower is high. As you start to go up and do the restoration at the top, it's extremely windy."

Mr. Racanelli, who is volunteering his time managing the project, is also overseeing fund-raising, for which about half of the $1.3 million has already been collected or pledged so far. Contributions are urgently being sought, he said, to complete the project. A link to donate is online at montaukhistoricalsociety.org. Among the largest contributions so far is a $438,000 grant from New York State and a $50,000 donation from BNB Bank.

While the Lighthouse may lack its usual holiday cheer, people can still tour the grounds from 11 a.m. to 4 p.m., weather permitting, through Dec. 20. The gift shop is open Thursday through Monday during those same hours through Dec. 20. The museum closes for the season this Monday.

"We'll have it next year, God willing. We can't wait to gather," Mr. Gaviola said. "We know how special it is. We'll really miss doing it."