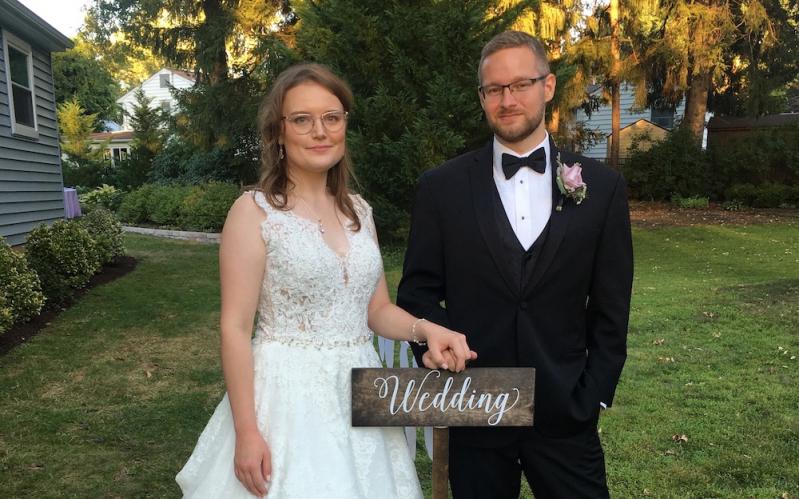 Emily McCachren and Peter Billings were married on Sept. 5 in Lawrenceville, N.J., in the backyard of the groom's mother, Lorna Ballard. The bride's father, the Rev. Scot McCachren, the pastor at the East Hampton Presbyterian Church, officiated.

The couple had planned to marry on May 2 in the Princeton Seminary Chapel in New Jersey but changed their plans because of the coronavirus pandemic. They now plan to have a wedding celebration at the Mountain Lakes House in Princeton on their first anniversary.

The bride is a daughter of Linda Chatfield McCachren and Scot McCachren of East Hampton. A Presbyterian minister like her father, she is the pastor of the United Presbyterian Church in McConnellsburg, Pa. She graduated from Elon University in North Carolina with a bachelor's degree in religious studies and minors in Jewish studies, peace and conflict studies, and poverty and social justice. She earned a Master of Divinity degree at Princeton Seminary.

The groom, a son of Ms. Ballard and Peter Billings Jr., also of New Jersey, is the youth pastor at the United Methodist Church in McConnellsburg. He graduated from the College of New Jersey, where he studied psychology. After several years of teaching in Haiti, Mr. Billings returned to school and earned a Master of Divinity degree at Princeton Seminary.

The couple share "a love of animals, board games, hiking, and social justice," the bride's family wrote. They live in McConnellsburg.