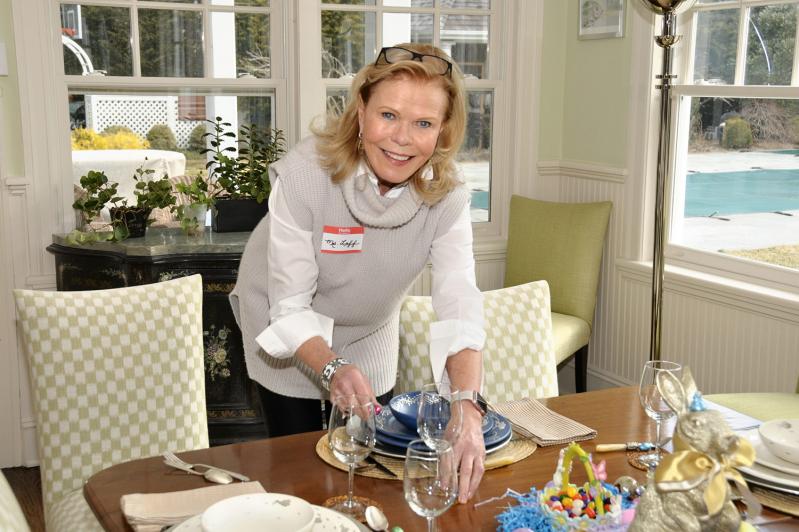 Dale Ellen Leff of East Hampton is an American School of Protocol-certified teacher of etiquette for adults and children.
Richard Lewin
By Christine Sampson

There are rules of etiquette, experts say, when hosting or attending a holiday dinner party, or a dinner party for any occasion, really. The ones that immediately come to mind include taking a hostess gift, spooning soup up and away from yourself en route to your mouth, properly introducing yourself and your guests, and not talking about politics or money in polite company.

“Avoid anything that’s controversial” in conversation, says Dale Ellen Leff of East Hampton, who is an American School of Protocol-certified teacher of etiquette lessons for children, international students, and adults. “It can be spoken privately with a person, or not at all, but certainly not at a gathering with 14 people at the table. You don’t want people to leave a party saying, ‘Oh, my gosh, she’s such a conservative, how can you be friends with her?’ ”

And then there are those for whom some of the rules are made to be broken.

“Do we avoid talking about politics? Given our group, no. We’re not a very divided group,” says Bob Weinstein, who frequently entertains friends at his historical house in Sag Harbor. “Sometimes family brings a different perspective coming from a different part of the country, but for the most part I will prompt the group to answer two questions that have been popular as of late. Who do you want to see win the Democratic primary, and who do you think can beat Trump? That’s not necessarily the same question. That prompts a lot of interesting dialogue among the guests.”

Ms. Leff and Mr. Weinstein both agree, though, that vibrant, flowing conversation is the key to a wonderful party. Ms. Leff even suggests coming to parties prepared with conversation topics, such as where people have traveled or their holiday traditions, and recommends that people don’t talk about themselves at length.

But what do you do when Cousin John brings up President Donald J. Trump’s latest stupid tweet or when Uncle Rick brings up Bernie’s socialist heresy again — or worse, when someone inevitably brings up the impeachment hearings and the party starts sounding

like 10 political pundits together in a room with poor acoustics?

“As a host, you can say, ‘Time out — we are going to refrain from talking about politics,’ ” Ms. Leff says. “You can say, ‘I’m so delighted to know your point of view and to know that it’s different from mine. That’s what makes the world go round.”

Maria Matthiessen of Sag Harbor has a different take on dinner party conversation. She once made an appearance on “This American Life,” a popular podcast on which her daughter Sarah Koenig is a producer, to talk about “the seven things you’re not supposed to talk about.”

Her no-nos? Health, diet, sleeping, dreams, menstruation, money, and “route talk,” i.e., how people get from one place to another.

“These are things that you don’t talk about because they’re boring,” Ms. Matthiessen said. “My family heard that and so by and large they try not to talk about that. The number-one topic that I hate more than anything is route talk.”

She came to the United States from England in 1965 and was surprised to learn that Americans are much more casual than the British.

“One of the things that surprised me hugely, and distressed me hugely, was people asking you what you do,” Ms. Matthiessen said. “It’s completely unknown in England. You just don’t do it. I still find it quite intrusive. When I first came here I was shocked when everybody gave their credentials, as it were.”

For entertainment, Ms. Matthiessen’s family plays charades and Mr. Weinstein and his friends play a game he has dubbed “Celebrity.” In that game, he said, they divide up into teams and pick an obscure but still famous person, then take turns offering clues and cues to try to guess who it is.

But Mr. Weinstein has a rule of etiquette of his own. “When I go to a person’s house, I will never ask the host or hostess who else is going to be there. I think that’s a good rule of thumb,” he says. “Sometimes you can see that in an email chain, but I find that if that information isn’t provided, it’s sort of a strange question to ask a host.”

As far as dinner party attire, Ms. Leff says it’s not okay to come dressed too casually — even denim jeans are too informal, she said. Mr. Weinstein’s rule is no shoes in the house.

“We live in a historic house with soft, pumpkin pine floors so at this point they know ‘shoes off.’ Sometimes women might object, but we provide slippers,” he said. His partner, Eric Hemsley, recently visited Amsterdam and brought back a dozen pairs of plush slippers in the shape of wooden clogs. “It’s very funny to see our guests walking around in furry little wooden clogs,” Mr. Weinstein said. “Other than the shoe requirement, we’re a pretty casual group. When we’ve done New Year’s people tend to dress up, but we’ve never asked for anything like that. The most important thing for me is that our guests feel comfortable.”

Then there’s the host or hostess gift. Apparently, candles are controversial. Ms. Leff recommends them as a possible gift, but Ms. Matthiessen disagrees, calling them “smelly things.” “It’s sort of a pass-along present,” she says.

A holiday ornament or hand towels might be a better choice. And Mr. Weinstein suggests a bottle of wine.

Cloth table napkins are a must, Ms. Leff says, and this time, Ms. Matthiessen agrees.

“It makes the evening seem more festive,” Ms. Matthiessen says. “I think it was a bit of a torture for my children because I’d get quite frantic about it.”

Ms. Leff says formal introductions, including a firm handshake one time up and down, are imperative. People should make every effort to remember each other’s names. If there are name tags they should be worn on the right side of one’s shirt.