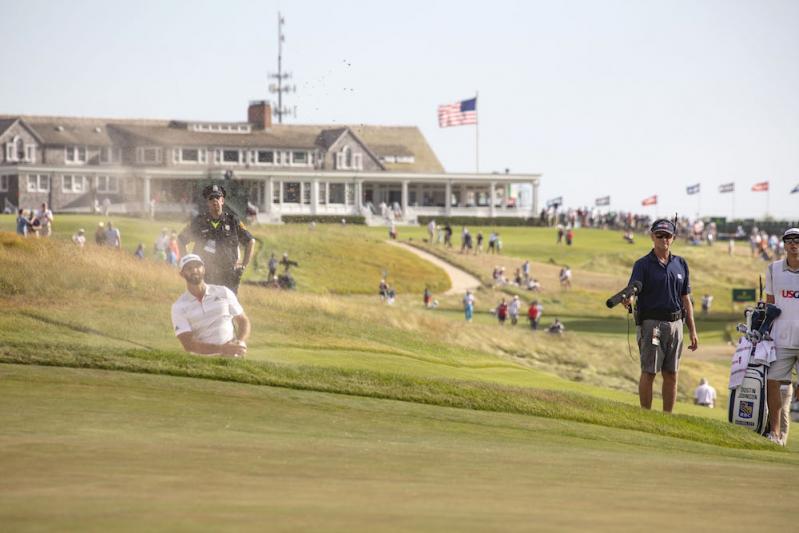 Dustin Johnson playing at the U.S. Open in 2018 at Shinnecock Hills.
John Musnicki
By Christine Sampson

Golfers in the know already know the East End has several gems among its greens, but Golf magazine has made it official once again.

With its 2020 list of the top 100 golf courses in the United States, the magazine selected Shinnecock Hills as number three and the National Golf Links of America as number four. The Maidstone Golf Club landed at 29, and Sebonack also made it onto the list, at 97.

Jeff Lewis, a panel adjudicator who himself has played 97 of the top 100 courses, recently told Golf magazine that "every course in the top 100 . . . is outstanding and a joy to play."

Shinnecock Hills in Southampton has hosted numerous men's U.S. Open tournaments, most recently in 2018, and will do the same in 2026. Built in 1891, it was redeveloped four times before 1931, when the present greens opened for play.

"Shinnecock is laid out utilizing the natural topography of the Shinnecock Hills, and resembles a number of the courses on the British Isles," the club says on its website. "It has long been recognized as one of the top courses of the world, and has been the scene of notable U.S.G.A. events since its beginning."

Eden Foster, the golf professional at the Maidstone in East Hampton, said this week that making it onto a list like Golf's top 100 "recognizes your work of art." A "true links golf course," the property sits in a unique position between the dunes and what was once farmland, bearing many similarities to golf courses in the United Kingdom, Mr. Foster said. "People travel all over the world to play these golf courses."

Maidstone has been ascending in prestige for several years now. "We've done a lot of work over the last eight years to get there," Mr. Foster said, citing the work of Bill Coore and Ben Crenshaw, well-known architects, who restored the course. He also said a lot of credit goes to Ken Koch, the general manager, John Genovesi, the superintendent, and Ted Walkowicz and Robert MacDonald, respectively the previous and present greens chairmen.

The National Golf Links of America in Southampton describes itself as "a first-class course" that, like these others, incorporates "many of the better qualities of golf courses in the British Isles."

Sebonack, also in Southampton, had the honor of hosting the Women's U.S. Open in 2013. "Jack Nicklaus and Tom Doak, two designers with dramatically different styles, have used the natural contours and features of the land to create a unique look," Sebonack says on its website. "The result is that Sebonack looks quite different from its illustrious neighbors and provides a strong golfing challenge for players of all calibers."