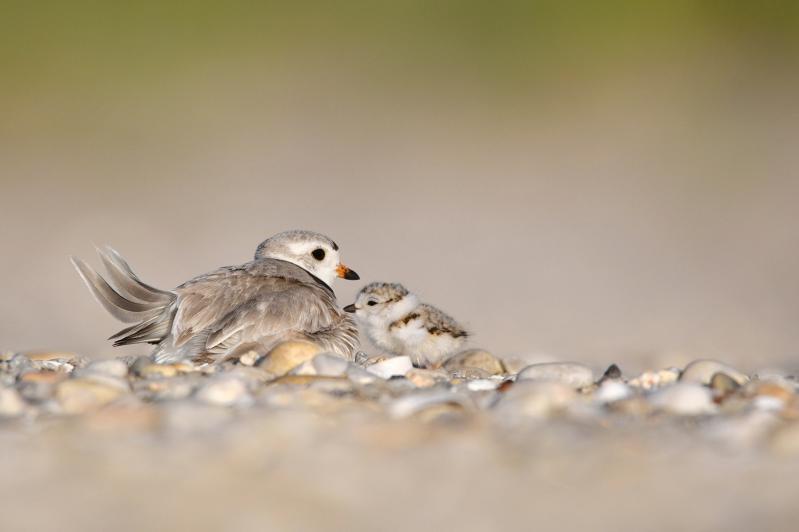 Over the past five years, the New York State Department of Environmental Conservation has reported between 392 and 462 pairs of nesting piping plovers. Its goal is 575 pairs.
Jay Rand
By Christopher Gangemi

Last year when the Suffolk County Parks and Recreation Department closed Shinnecock East because of nesting piping plovers, its Facebook page lit up with angry comments.

"These birds are nowhere near endangered. They have taken over every beach on the island!" wrote one user. Others see a government conspiracy at work. "It's called crowd control. They make you think you have freedoms!" wrote another poster.

Echo chambers of ignorance are an unfortunate fact of life in 2022. They persist because of the way the algorithms curate our online existences. If you think plovers are part of a government conspiracy to keep you from enjoying the beach, then odds are you'll find a handful of people online to agree with you. Thankfully the Town of East Hampton Natural Resources Department is using statistics and not Facebook comments to manage plover nesting areas.

The fact of the matter is that the plover is indeed endangered both across the United States and in New York State. In 1950, according to John Bull's "Birds of New York State," there were 50 nests at Mecox Bay. In 2021, there were four, according to the 2021 Southampton Town Endangered Species Annual Report. Why? We have invaded their breeding territories with our houses, our trucks, our dogs, and our feet.

Samantha Klein heads the piping plover program for the East Hampton Town Natural Resources Department. It manages 18 miles of ocean and bay beaches within the town, excluding federal, state, and county-owned land. Her challenge is to achieve a balance between conserving the habitat of the plover and allowing people to enjoy the beach. People get upset at temporary beach closures, but the alternative to the town managing the population is the state entirely closing certain beaches for the breeding season. Ms. Klein demurred when asked to share some bad stories, but made clear they exist, saying only, "Some people you can't get through to."

She leads a group of seven volunteers who are tasked each spring with locating and then monitoring piping plover nesting sites. By mid-May, many of the plover pairs have eggs, but no chicks. During this stage, the "symbolic fencing," a string strung between posts that encircles the nesting areas, is usually just around the upper parts of the beach, where the nests and eggs hide in plain sight.

"We don't want to put up more fencing than we have to," she said.

Piping plovers are masters of camouflage. Beachgoers often confuse them with sanderlings, which chase the retreating waves at the shoreline. The least tern, itself endangered within the state, shares nesting habitat with the plover and also creates identification confusion. Piping plovers are sand-colored, small, and difficult to spot. They use their camouflage to blend when approached by a predator. This is why their nesting areas must be left alone. They won't flee at the sight of an off-leash dog or a truck. Instead they'll hunker and hope.

It's imperative that the volunteers get the fencing up early in the season, when the plovers are searching for their nesting sites. Ms. Klein says pairs that nest early are more successful in raising young than those that nest later, and successful early nesters means the monitors can remove the fencing faster. When the eggs hatch, about 30 days after they're laid, the chicks are absolutely helpless, since they can't fly. That's when the fencing extends farther down the beach, to protect the wandering chicks.

Susan Haig, a professor of wildlife ecology at Oregon State University, has been studying the plover for decades. She says the presence of plovers indicate the quality of a beach. If they're present, that's a good sign.

"These aren't birds with incredibly long migrations," she said. They migrate south in the fall but tend to stick to the Atlantic Coast. "If they're struggling, we've no one to blame but ourselves. If people want a nice beach to go to, they have to care for it. The beach needs recovery time. If that means areas of the beach have to be left alone for a couple of months each year, so be it."

In fact, piping plovers nest on only a handful of beaches on the East End. From September until February trucks or dogs on the beach are inconsequential to the plovers. But avoiding beaches with nesting plovers with your truck or dog during the breeding season helps the birds immensely. There are plenty of beaches both on the bay side and ocean side where plovers don't nest. To make it easy, Ms. Klein says "All of Montauk is historically plover free."

Climate change is going to take the beach away, anyway, says Ms. Haig. "People should relish and revere the beach and the creatures on it while they can."

Those interested in helping Samantha Klein protect our local plovers can email her at [email protected].