The Montauk Monster gave Senate Barack Obama a “bump” greeting this week. Not really. The image appeared on the Web site montymash.com.
By Russell Drumm

The Montauk Monster is missing. The putrescent carcass of the creature whose image has captivated millions around the globe and spawned nearly as many identities was taken from two Montaukers. They said they planned to supply the beast’s bones to an artist who had already found a buyer for signed monster art.

“Someone came and took the carcass. Now I have to hunt for my damn creature,” said Eric Olsen, an agent for Blue Dog Realty and a surfer, who retrieved the rotting animal from the beach in front of the Surfside Inn on the night of July 13, the day it was first photographed by Jenna Hewitt.

“I took the creature off the beach at 11:30 in a bag and put it in the back of my car. I brought it to Noel Arikian’s, and we were going to reduce it to bones,” a disappointed Mr. Olsen said on Sunday.

According to the plan, the monster’s bones were to be given a lucrative artistic touch by Rafael Mazzucco, a fashion photographer and artist who has a house in Montauk. Mr. Olsen said the artist had more than one New York City patron interested.

However, at some point over the weekend, the carcass was removed from the woods beside Mr. Arikian’s house where it had been left to decompose.

On Tuesday afternoon, Mr. Olsen made a passionate appeal for the return of the Montauk Monster’s remains in the interest of art.

The day before he had driven to Kennedy Airport to pick up Mr. Mazzucco. During the ride home, Mr. Olsen said, he and the artist went over the plans they had made to entomb the monster’s bones in a block of fiberglass resin in the manner of the artist Damien Hirst. But then the monster was gone.

Mr. Olsen said he was claiming ownership of the rotting carcass by virtue of what he’d gone through on the night of July 13 to take it from the beach to Mr. Arikian’s yard, where photos were to be taken and artistic plans made.

“I ran down the beach looking for it with a flashlight. I found it and put it in an Atlantic Realty Group bag and put it in the car. I almost puked,” Mr. Olsen said of the smell. During the ride, he said, he worried he might be stopped by a policeman, “who would think I had a dead body in the car — there was.” 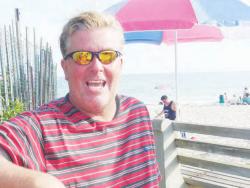 The disappointed sculptor said he felt certain the rumors circulating around Montauk were true — that the monster had been ferreted away by Carter and Colin Davis, who are twin brothers, and was now in the possession of their father, Paul, who had plans to make a movie starring the monster. Paul Davis could not be reached for comment. In fact, the Davis boys had permission to take the beast.

Mr. Olsen said he saw no conflict. “Let them do what they want to do. Just give us back the bones when they’re done.”

The most recent chapter follows a blizzard of media and Internet attention that would not seem to result from the demise of a raccoon or small dog, two of the more likely guesses as to the true nature of the beast.

“I have a headache,” Ms. Hewitt said on Monday, the day before she was to be interviewed by a number of radio and television reporters. Ms. Hewitt snapped the famous photograph of the creature after she and her friends Rachel Goldberg and Courtney Fruin found it washed up in front of the Surfside.

“We’ve had invites. It’s fun, but it’s August, and we work in restaurants,” Ms. Hewitt said.

The photo of a small animal, which looked perhaps like a pig with a beak or a dead dog, was first printed in The Independent newspaper, then made its way to the Web site Gawker, whose initial story has been viewed more than 1.2 million times.

The mystery mushroomed on the Internet. In the fertile imagination of the blogosphere, it became a mutant from the animal testing facility on Plum Island, a creature from outer space, or a griffin. Along the way, the Montauk Monster acquired a nickname, Monty, putting it among a rarified class of creatures of dubious authenticity, such as the Loch Ness Monster, which is referred to as Nessie.

People with time on their hands have filled pages upon pages of commentary and speculation about it on various Web sites. Others carefully pasted the digital image onto photographs, such as one that showed Barack Obama bumping fists with the Montauk Monster.

At press time it was learned that a deal had been struck between the Olsen and Davis groups. “Lawyers are involved now,and there may be a bidding war for the bones,” Mr. Olsen said.