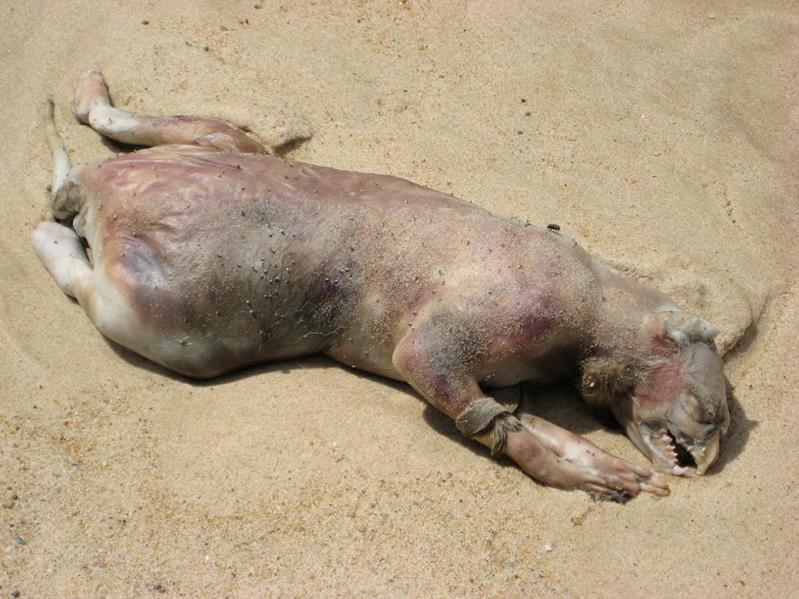 No question about it. The creature found on July 13 on a Montauk beach, only a few miles west of where the government conducted the infamous Montauk Project time travel experiments on children kidnapped from New York City streets, is definitely from outer space.

No? How about a turtle without a shell, or a pug given a burial at sea from a passing yacht.

Ever since Jenna Hewitt, Rachel Goldberg, and Courtney Fruin found the thing in front of the Surfside restaurant, the electronic clones of the creature have invaded computers — by way of Ms. Hewitt’s snapshot — until the Internet itself is threatened.

“This is an actual monster, some sort of rodent-like creature with a dinosaur beak . . . a government animal-testing facility is close by,” according to the Phantoms and Monsters Web site, which picked up the story from Gawker.com on Tuesday.

“. . . but unless the government is trying to design horrible Montauk Monsters that will eat I.E.D.s and fart fire at bad Iraqis, we’re not sure why they would create such an unthinkable beast,” a blogger for the Web site wrote. “Our guess is it’s viral marketing for something.”

“I ate one of those things once. They don’t taste bad,” joked Jacques Paysan.

“This is exactly how I imagine Karl Rove looks on the inside,” opined Red Hot Aries on Gawker.

“The Montauk Monster lives a productive life as a beaked pig on a beach in Montauk,” wrote the Monster itself disguised as a blogger in The Huffington Post.

The Monster arrived on the Fox News channel yesterday with Dan Rattiner of Dan’s Papers wondering what it could be. “Eyewitness News” has also been infected. Fox reported that the Monster had received more than 60,000 Internet searches.

Whatever it is or was, the thing is currently decomposing in the woods not far from the home of Noel Arikian, a Montauk local. “Eric Olsen brought it over as a conversation piece,” Mr. Arikian said yesterday.

“In photos there appeared to be a beak. It was just a tricky angle. It’s a dead raccoon. That’s what it is. It’s undoubtedly a raccoon, the same teeth, paws, the right size.”

Larry Penny, East Hampton’s director of natural resources, agreed and added that when raccoons get old they wander off to marshes to die. High tide might have floated one out of a marsh and into the sea.

“No other animal has a body like that,” Mr. Arikian said.

At least on earth. Does Roswell ring a bell?