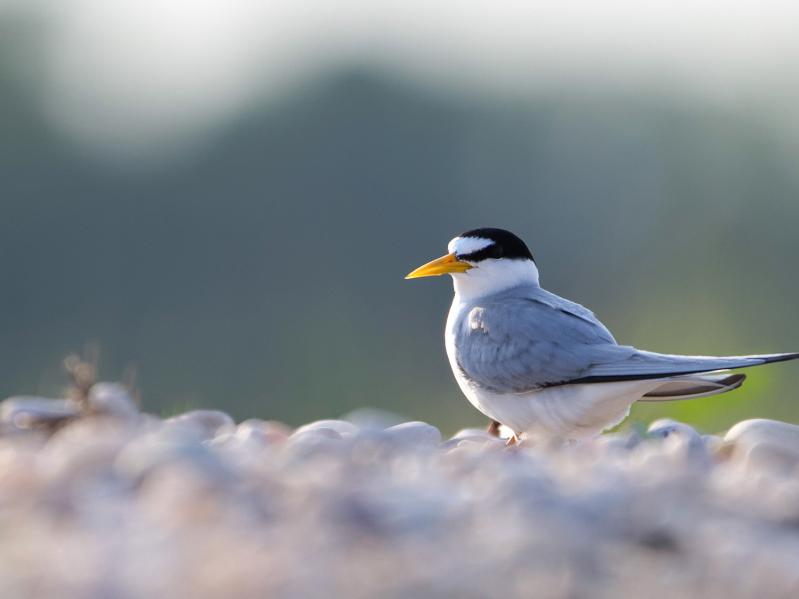 A powerful memory: my 2-year-old daughter (now 17) standing at the mouth of the Mecox Inlet. The water is shallow, only up to her waist. She’s laughing as least terns, maybe 15 to 20, take turns plunge-diving into the waters around her, smashing into it like gigantic raindrops, causing mini explosions.

She’s looking up at the sky as if she can’t imagine her good fortune, and smiling. Her palms are facing upward, and she’s lifted her hands up toward her cheeks. It’s raining birds! The world is indeed magical.

Least terns are properly named, they’re our smallest tern, and thin. They slice through the air, buoyant and bouncy, on clipped wingbeats, patrolling the waters below. They’re very vocal. Their call is high-pitched and squeaky, with a sharp grating quality. Learn it, and you will often hear them before you see them.

Apart from their size, and squeaky, high-pitched call, the next best identifying characteristic that marks the least tern is its yellow beak and white forehead. Its tail is deeply forked and often splayed while hunting, giving the bird a pointy appearance.

They’re not shy. I’ve been swimming at Long Beach, hundreds of yards from their nesting colony, and if the fishing is good, they dive all around me in small groups. I can see them silhouetted against the sunset there, flying home.

I’m fascinated by what birds pull out of the sea. We’ve all watched ospreys make off with surprised fish, but have you ever noticed a tern gather up the “loose silver” of the water, as Mary Oliver called it in her poem “Terns”? They sometimes hover before they plunge, completely focused on their prey just below the water’s surface.

The list of fish they eat, according to allaboutbirds.org, is impressive. I include the full list because I find it evocative of our bay beaches. Take a second to read it aloud. Sandlance, herring, hake, anchovy, menhaden, silversides, killifish, shiner perch, topsmelt, surfperch, mosquito fish, flat croaker, creek chub, sand shiner, plains minnow, gizzard shad, river carpsucker, and river shiner.

They hunt close to their nesting grounds. During the mating season, a male will present one of these tiny fish to a female waiting near the nesting colony. If she’s on eggs, he’ll feed her. It’s incredibly sweet and worth appreciating. Watch from a distance with a pair of binoculars. It will leave an impression.

Another name for the least tern, according to T. Gilbert Pearson in “Birds of America,” is “little striker” for the strong defense these tiny terns put up if someone (or an unleashed dog, or amazingly, remote controlled dune buggies last Tuesday) wanders too close to their nesting territory. They will make contact and draw blood with their sharp, yellow bills.

Unfortunately, this defense mechanism nearly led to their downfall. “Any old tern hunter will tell you that, if one be shot down, its friends will at once come and fly anxiously about emitting their squeaky cries of anxiety. It was thus often possible to bag almost the entire company.” Ten thousand were shot on Cobb Island in Virginia in a single season. “The orphaned young were left to perish on the beaches,” wrote Mr. Pearson.

They are summer residents in the Hamptons, arriving in May from the coasts of South America and staying through September. They are long-lived (the oldest banded least tern was 24 years old) and return to the same nesting area year after year. Pairs are monogamous. They nest in colonies, often in the same areas where piping plovers nest. According to the New York State Department of Environmental Conservation, least terns took advantage of areas they never nested in previously when symbolic fencing was put in place in the 1980s to help protect the plovers.

By the time this is published, all of our local terns will have laid their eggs, and many will have unfledged, helpless young. Now is the time to give them space. From the middle of July until the end of August, the young that survive will become fledglings.

John Bull, in “Birds of New York State,” does a good job summarizing the history of the least tern from before 1880, until 1964.

“Formerly common (prior to 1880), its numbers were severely depleted by the millinery hunters. With full protection in 1913, the species recovered strongly by the 1920s and is now once more numerous. Its future depends upon the preservation of beaches from being developed into bathing resorts.”

What’s happened since? Well, if you’ve been reading this column, you can guess the answer. According to allaboutbirds.org, least terns have declined 87 percent since 1966, just two years after Bull described them as “numerous.” In 1983, the D.E.C., according to their species assessment, listed the bird as “endangered” in New York State. By 1999, the population appeared to stabilize, and so they were “reclassified as a threatened species.”

How many terns are on Long Island? The D.E.C. reports that “Surveys from 1985-1995 found an average of approximately 3,000 breeding pairs at between 50 and 66 colonies” along the coast.

We’re lucky to have these birds. Without them, that day at the beach with my daughter might have faded from my memory long ago. Pick anything that’s important to you. Imagine it had declined by 87 percent in the last 50 years. Please remember to share the beach respectfully with these birds. It’s critical habitat.

Whip-poor-wills and Bobwhites, oh my!

I’m happy to report that in response to last month’s “On the Wing” about whip-poor-wills and the East magazine article about the vanishing northern bobwhite, I have received some positive correspondence.

Nancy Zdyb wrote from East Lake Drive, a stone’s throw from where my father spent time in the 1950s, to tell me she had a bobwhite hanging around there for about a week in June. Strangest of all was a video sent to me by Irene Tully from Shinnecock Bay of a bobwhite calling from her neighbor’s garage. In the distance, another returns its call. While this is undoubtedly a released bird, and not in the proper habitat, it was heartening to see, nonetheless.

Meanwhile, Mary Curles, who lives on Mako Lane in Amagansett, reported hearing a whip-poor-will for the first time in over 20 years. She said it sang for 15 minutes straight. Go nature!

Mashashimuet Park's History and Future
A Conference for Young People to Create Solutions
Get Outside, Get Moving
END_OF_DOCUMENT_TOKEN_TO_BE_REPLACED