Trumpeter swan spotted for first time, and other rare visitors tallied too 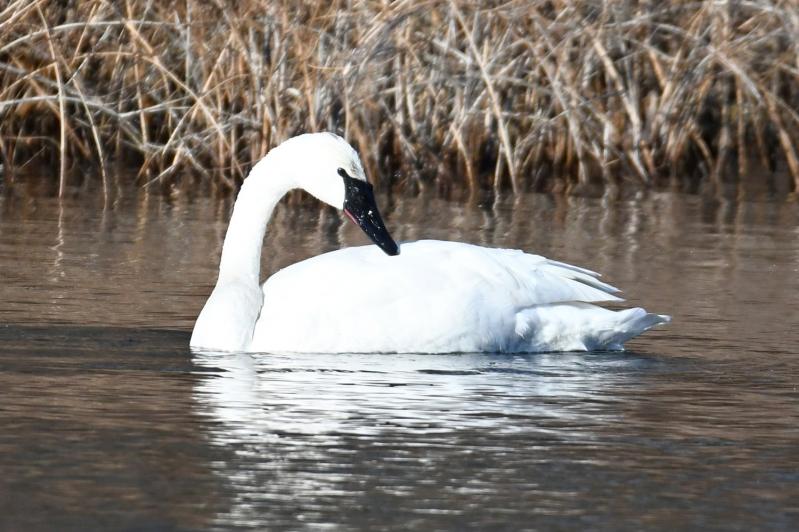 A trumpeter swan, made famous by the E.B. White book “The Trumpet of the Swan” but exceedingly rare on Long Island, wowed participants of the Montauk Christmas Bird Count.
Tim Healy
By Christopher Gangemi

Cold and wind greeted the 45 participants of the 93rd Montauk Christmas Bird Count on Saturday, but the rough conditions didn’t stop them from tallying 131 different species, the highest total for the count in the last 10 years.

That total included a bird that had never been seen before on the count: a trumpeter swan, found by Brent Bomkamp, who, along with Angus Wilson, compiles the count. The swan was in a small triangle of water where Industrial Road meets Edgemere Street, just across the street from Fort Pond, and easily viewed from a car.

“Michael McBrien put the species on my radar in the morning by mentioning that the Block Island C.B.C. had recorded two tundra swans, which were initially mistaken for trumpeter swans,” Mr. Bomkamp said in an email. “Later in the day, I was covering Fort Hill Cemetery and spotted an adult swan feeding on Fort Pond. It was pretty distant, but I was surprised by how long it was keeping its head underwater and it was solitary, which is somewhat unusual for a mute swan.”

After Mr. Bomkamp, a lawyer by trade, looked through some photos, he noticed the bill was dark, and reached out to other birders in his “Lake West” territory to verify his suspicion that it was a trumpeter and not a tundra swan.

Each Audubon Christmas Bird Count is named for the area around which a circle with a 15-mile diameter is centered. The circle is then broken into a smaller number of territories, each led by a birder who collects bird counts from the participants in that section. The Montauk count is broken into six territories: Point North, Point South, Lake West, Napeague, Accabonac, and Gardiner’s Island.

A light competition among territories over which can find the most species of birds is a fun feature of the count.

“I headed down to the pond from the cemetery and Pat Lindsay and Shai Mitra were the first to arrive. Soon after we got there, the bird lifted its head and revealed a massive, blocky bill, confirming trumpeter swan.” Score for Lake West.

On the East End of Long Island, 99.9 percent of the time you see a swan, it will be the abundant mute swan. In fact, when the trumpeter swan tried to move out of Fort Pond north to Ice House Pond, next to Duryea’s, it was harassed and chased away by the resident mute swans.

Ironically, the mute swan is not native to the United States, while the trumpeter swan is, although it generally resides near the Great Lakes up through coastal Canada, and to Alaska. The website allaboutbirds.com says mute swans’ “aggressive behavior and voracious appetites often disturb local ecosystems, displace native species, and even pose a hazard to humans.”

While the trumpeter was clearly the bird of the day, there were other birds of note. A painted bunting was found near the Fort Hill Cemetery — only the fourth time the bird has turned up in the count — and a clapper rail, which has only been found twice before in the Montauk Christmas count, was spotted in the Accabonac territory. A bird familiar to summering East Enders, the great egret, was also found in Accabonac, only the sixth time it has shown up on the count.

Most great egrets are wisely south of the Mason-Dixon line at this point in the year.

Many of the birders on the count have participated in years past and tend to stick to territories they have birded in previously. However, it was the first Montauk Christmas Bird Count for 12-year-old Elias Markee-Ratner, who traveled from Manhattan for the event.

“I mostly covered Montauk Point where I saw awesome seabirds like black-legged kittiwakes and razorbills. I like the Montauk count because it combines the bird life of the ocean with the bird life of ponds, marshes, forests, and fields,” he said.

“He was incredibly adept for his age,” said Mr. Bomkamp.

Elias discovered birds in kindergarten in his public school, where one of his teachers, a birder, taught a unit on birds. “He’s been hooked ever since,” said his father, Patrick Markee, who was alongside his son all day, birding and sharing in the fun.

James FitzGerald, who grew up in Sag Harbor, also liked the collision of habitats that the Montauk count offers. “My favorite part was the sea watch, where we scanned for oceangoing birds from the bluffs, while also keeping an eye out for songbirds in the bushes behind us. It’s the only part of the day where sparrows can collide with puffin lookalikes!”

The trumpeter swan was still present on Tuesday on and around Fort Pond. It’ll be a cold and windy weekend. Put the family in the car and take a drive out. Before you’re tempted to say, “It’s just another swan,” think about the E.B. White book, “The Trumpet of the Swan,” and that the Montauk Count first started in 1920 and this is the first time this bird has shown up here.

Why did it choose to visit us in Montauk, instead of sticking to, say, Vancouver? It can boggle your mind if you let it.

Meanwhile, the Orient count is the last Audubon Christmas Bird Count for the East End in 2022 and takes place on Dec. 31. Those interested in joining can contact John Sepenoski, the compiler for the count, at [email protected].