‘An archipelago’ of habitats could support native bees, wasps, and birds 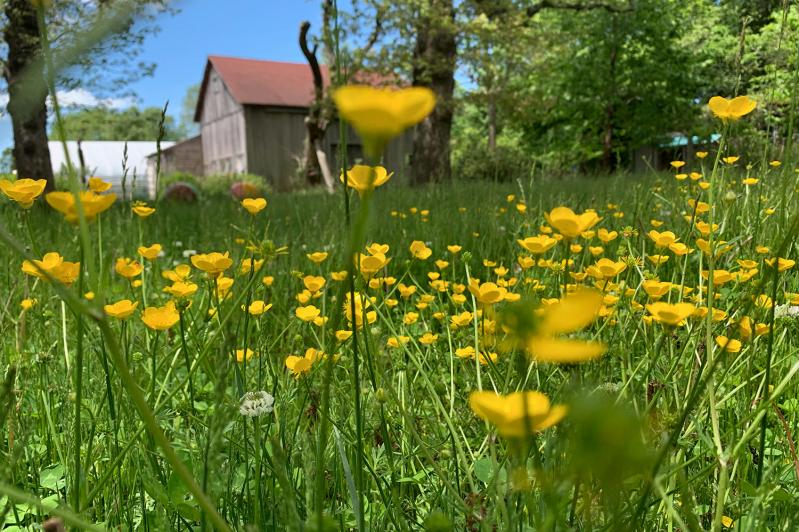 A field of native clover and buttercups at the Marders Pollinator Sanctuary in Springs. One reason the family started the sanctuary was they were concerned about aerial spraying for mosquitoes.
Jozie Marder
By Christopher Gangemi

Drive up far enough into Springs, and you’ll see signs for Marder’s Pollinator Sanctuary. A group called ChangeHampton has petitioned the East Hampton Town Board, calling for a pollinator garden on the Town Hall campus. At the East Hampton Historical Farm Museum, the Matthew Lester Memorial Garden, posthumously installed to complete the Eagle Scout project of an East Hampton teen who committed suicide in 2017, welcomes pollinators. At the soon to be created Lovelady Park in North Haven, a small fenced-off section for pollinators has been proposed. And at the South Fork Natural History Museum, Frank Quevedo, the director, reports that its 12-year-old pollinator garden, perhaps one of the first in the area, “is very successful in attracting many native insects throughout the year.”

So what is a pollinator garden, and what’s the big deal? The idea, according to the organizers of the Pollinator Pathway movement, a volunteer-led group organized by different town conservation organizations, is that we’ve chopped up and fragmented the environment. To “de-fragment,” we need to manage our backyards without pesticides and with native plantings so they can connect with parks and preserves, creating a sort of bird and insect “refuge corridor” amidst the acres of ecologically dead sod and lawn that typify backyards.

Think Neddy Merrill, from the John Cheever short story “The Swimmer,” connecting suburban pool to suburban pool, as he attempts to swim across the county. Imagine a pollinator patch in each backyard instead, strung between parklands, the insects traveling from one to the next.

“Honeybees get all the press, but beetles, ants, bats, and hummingbirds are all important pollinators,” said Tamson Yeh, a Cornell Cooperative Extension educator.

She’s in a YouTube video Mica Marder made back in 2020, strolling through his pollinator garden, net in hand, capturing and identifying insects. He founded the sanctuaries in 2017, and originally, they were bee-centric. But after feeding the bees, he soon realized that they were only a small part of the puzzle. “Native bees and wasps, and flies, the list goes on and on,” they all needed food, he said by phone.

The diversity of insects continually changes too. “Each month and week there’s different hatches,” he said.

“It’s easier for people to appreciate honeybees because they provide stuff that people can see physically, like honey or bee pollen, and they’re used to create food on a large scale,” he said. In the meantime, we’re losing native bees, because they’ve lost their habitat. Many native insects are specialists that pollinate specific flowers at a certain time of year. If those flowers go away, so do the insects. Think of the monarch butterfly: Remove milkweed, its host plant, and you’re essentially plucking monarch butterflies from the air.

He also learned that the western honeybee, which he said is a domesticated insect, “bred and hybridized like a pig,” also has more rights than other pollinators. “Legally the honeybees have a right, but the other insects don’t have a right.” When the county was spraying for mosquitoes over Accabonac Harbor, it was in part the presence of his pollinator sanctuaries, and the domesticated honeybees within, that convinced the county to stop spraying.

“One reason we started the sanctuaries, is because we were worried about the constant blanketing spray by the helicopters,” he said.

The sanctuaries are sort of an indulgent experiment, he admitted. “What if we create a zone of observation and try to understand what happens? Would ticks increase? What if we locked out the deer and let the native bugs and pollinators in?” The sanctuary on Springs-Fireplace Road is over two acres, the largest pollinator garden on the East End.

People spray pollinator-killing pesticides monthly to try and control ticks. But there are other ways. The most effective strategy to prevent tick-borne illnesses is to conduct a nightly “tick check,” especially between April and October. Creating a buffer between lawn and woods, or other natural areas of your yard, also helps. Tick boxes (tickboxtcs.com), which are placed by professionals around the perimeter of a property, replaced yearly, have also proven effective.

ChangeHampton describes itself as “a group of alarmed East Hampton residents,” seeking to inspire a Pollinator Pathway movement in the town. To that end, the group has asked the town board to create a pollinator garden at Town Hall, as an example that there are alternatives to sod and a model for others to follow.

Peter Van Scoyoc, the East Hampton Town Supervisor, said such a patch was “something I proposed before the pandemic hit,” but that the pandemic stopped the project’s momentum. “Then I start getting these petitions from all over, urging me to put a pollinator garden in Town Hall.” He said he supported the idea, that there are already wildflower seeds on order, and that the board is waiting to get ChangeHampton’s plan. It will be great to show the public there are “alternatives to having a monolithic grass lawn,” he said.

Leonard Green, a member of ChangeHampton, said one of the nicest things about a pollinator garden is that it reduces the amount of leaf blowing and is inherently low maintenance. But having one or two won’t cut it. He said bees can only fly a few hundred yards; they need to be able to fly from one habitat to another. That’s why the “idea is to create bridges, or archipelagos, a corridor of landscapes, of habitat.” He mentioned Doug Tallamy, a professor at the University of Delaware, and his book “Nature’s Best Hope” as an inspiration.

Mr. Green said ChangeHampton will present its plans to the town board on May 17. “We want to educate the public to spread the idea that this is happening and it’s something you can do at your home. You may not be able to save the Amazon, but you can make some simple gestures” around your house that can make a difference.

Neddy Merrill would be proud.