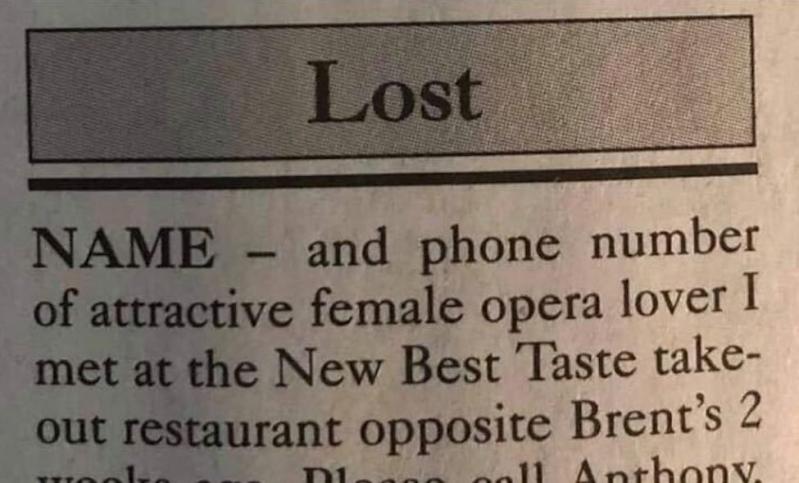 "I have only one question," he said to her. "Do you love the opera?"
By Irene Silverman

Waiting for his sweet-and-sour soup by the window of a Chinese takeout on Montauk Highway a few weeks ago, Tony Lombardo of East Hampton had a brief encounter that left him longing for another.

He and a Windmill Village neighbor had driven over to the restaurant in his 1993 Cadillac with the license plate OPERACAR, and while they waited, she got talking to another woman. The two chatted for a few minutes and then the neighbor turned around to him with a mischievous smile.

Mr. Lombardo, who was 90 in November, has had a pretty good life, finding some happiness along the way but also, with two marriages and two divorces, losing some. He took a look at the blonde. "A Swedish beauty," he told a caller on Sunday.

"I have only one question," he said to her. "Do you love the opera?"

The neighbor took it from her. "She stuffed it in my pocket, and when I looked, I couldn't find it." He turned out all his pockets. Nothing.

"And then, in desperation, I came to the [Star] office," he said, where he placed  a classified ad, under the bold black heading LOST:

Then, Mr. Lombardo — who has over 100 operas in his collection, on vinyl, DVD, CD, tape, what have you, and plays them in his apartment and at the East Hampton Town Senior Citizens Center for whoever will listen — went home to wait.

A week went by. Then another. The call he was waiting for did not come.

Last week he went back to the New Best Taste to pick up more soup. "Vegetable and tofu, that's the only one I like. Delicious. I buy a quart at a time, sometimes two, and put it in the fridge."

He had another objective, though. He'd cut out his LOST ad from the paper, and while they were filling his order he Scotch-taped the clipping to the wall next to the takeout window. Maybe the Swedish beauty, should she ever return, will see it.