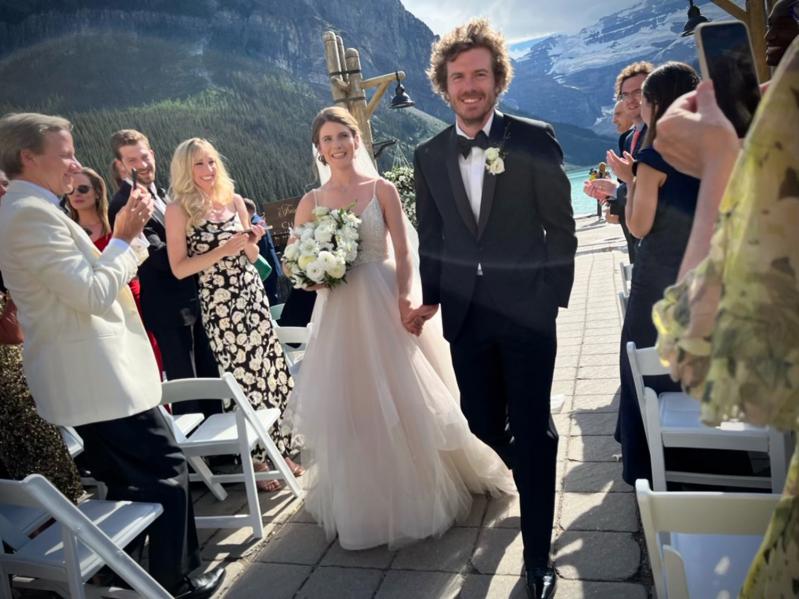 Samantha Whitmore and James Leakos celebrated their marriage on Aug. 13 at the Chateau Lake Louise in Alberta, Canada.

The couple, who were legally married on May 1, 2021, on the south rim of the Grand Canyon, renewed their vows in the presence of more than 150 friends and family members gathered from all over the United States and Canada for the occasion.

Jeffrey Foster, a cousin of the groom, officiated at the lakeside ceremony, which at one point was threatened by a freak thunderstorm that capsized several canoes on Lake Louise. The ceremony itself was preceded by a week of outdoor activities in Banff National Park, including mountain hikes, gondola rides, and whitewater rafting.

The bride is the daughter of Alice and Wayne Whitmore of Amagansett. Mr. Leakos is the son of Mark Leakos of Saskatoon, Saskatchewan, and the late Wanda Leakos.

Both bride and groom graduated from Harvard College; she with a bachelor’s degree in math and physics and he with a degree in chemistry. Ms. Whitmore also holds a master’s degree in physics from Cambridge University.

The couple met at Brooklyn Boulders, a climbing gym in Cambridge, Mass., and are dedicated runners. Mr. Leakos was captain of the Harvard cross-country team and ran professionally for Adidas. Ms. Whitmore was the female winner of last Thanksgiving’s Montauk Turkey Trot 5K race. They live in Flagstaff, Ariz., where they run, ski, hike, and climb while pursuing careers as software engineers.