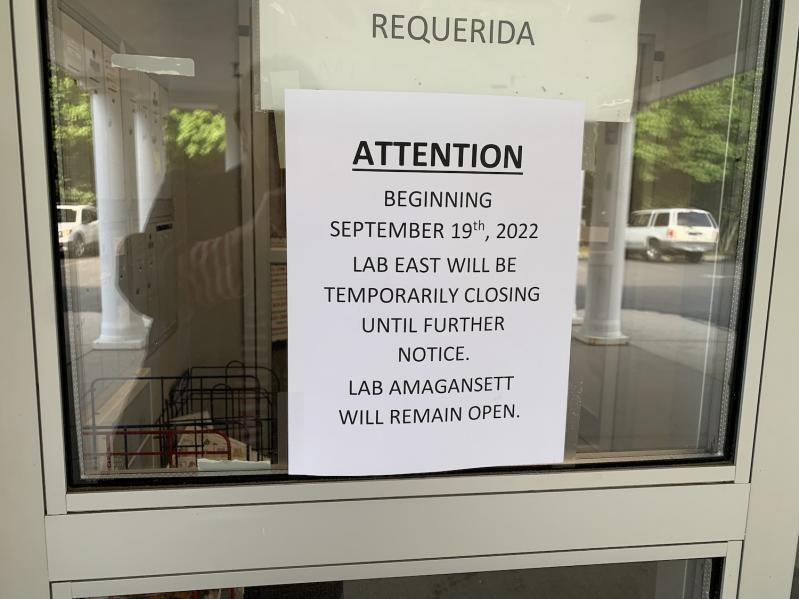 A sign on the door at the Stony Brook Southampton blood lab in East Hampton alerts patients to its temporary closure.
Durell Godfrey
By Christopher Gangemi

In a move that complicates things for doctors and their patients at the East Hampton Healthcare Foundation facility, radiology services offered at the Stony Brook Southampton Hospital offices there will be halved, and the hospital’s blood lab there will close for a month.

The hospital is set to close the blood lab on Monday. Both the lab and the radiology screenings will be back to regular hours by Oct. 17, according to a hospital spokeswoman.

“In response to the seasonal decrease in population following the summer’s surge, Stony Brook Southampton Hospital is adjusting resources and will temporarily suspend lab bloodwork in Westhampton and at the East Hampton Pantigo Place lab,” hospital officials said in a statement issued Tuesday. Radiology screenings will be offered only on Tuesdays, Wednesdays, and Thursdays.

It is unusual for the East Hampton labs to close because of seasonal population changes, doctors there said.

“I haven’t received anything from the hospital about the closure, either in writing, or by phone,” said Dr. George Dempsey, the medical director at East Hampton Family Medicine, located just down the hall from the labs. Dr. Gail Schonfeld of East End Pediatrics, which also operates out of Pantigo Place, said she also had not been notified by the hospital.

“Our staff feels the impact of fighting Covid for two years and counting,” Barbara Jo Howard, the director of communications for the hospital, said in an email. The hospital is “interviewing phlebotomists to fill the positions of those who have recently retired after serving our community well for years.” Those positions will need to be filled before the East Hampton lab can reopen.

“I think their priority is inpatient care at the hospital and there is most likely inadequate staffing to supply both,” Dr. Schonfeld said.

“Most phlebotomists I know tend to be young people who move on to a better position,” said Dr. Dempsey. “They’re probably among the least-paid workers in the hospital.”

While the Pantigo Place lab is closed, appointments for bloodwork are available at the hospital’s nearby lab in Amagansett, just two miles from the Pantigo site.

But the services offered in Amagansett are not as extensive as those offered at Pantigo Place. “The drawing station in Amagansett doesn’t have X-ray, mammogram, or bone density checking. These are services we’ve had at Pantigo for 20 years,” said Dr. Dempsey.

“Certain things might push people towards early retirement,” Dr. Schonfeld said of the nationwide staffing shortages, “A pandemic is one of them.”

Officials at the East Hampton Healthcare Foundation could not be reached for comment.