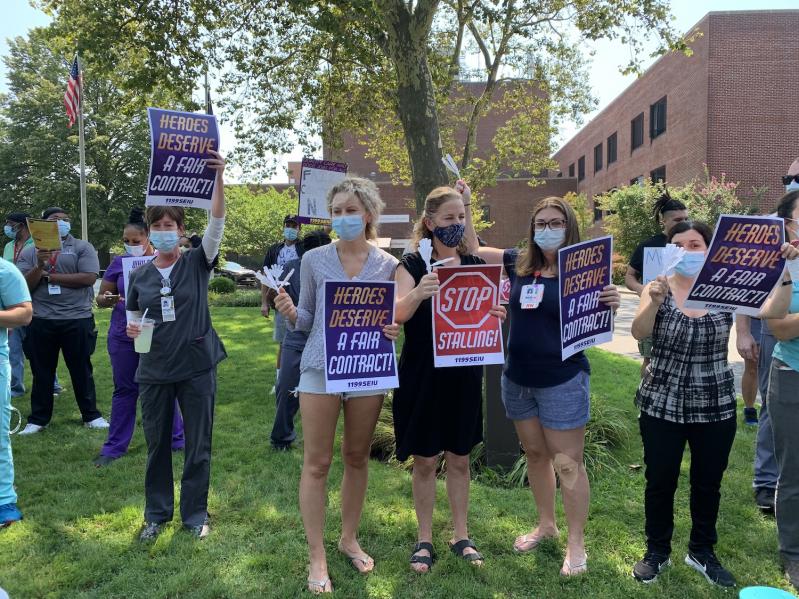 Nurses and other members of the health care workers union at Stony Brook Southampton Hospital picketed on Thursday in an effort to get the hospital to agree to contract demands. The union's current contract ends on Sept. 30.

"We want management to come to the table and be fair," said Dominique Roberts, a contract administrator for Service Employees International Union 1199. "We're looking for a fair contract, fair wages, and for benefits to remain the same."

Alan Kiceina, a registered nurse who works in the hospital's intensive care unit, said members had requested a wage increase for working during the pandemic, but had been rebuffed. "Other hospitals and companies took care of their workers, and here we were with Covid patients," he said. "I'm in the I.C.U., we had the bulk of the patient load, and we showed up every day and did what we had to do."

"Management said they had to look at their budget in July and see what they could give them, but they still haven't received hazard pay," said Ms. Roberts. "July came and still nothing."

The employees often had to shoulder more than their fair share of work at the height of the pandemic, she said. Christopher DiGrazia, a respiratory therapist, recalled running back and forth between floors and the I.C.U. to tend to patients. "There would be three or four of us trying to cover the whole hospital," he said.

Amanda Gubelman, who works in the billing department, said she hopes the new contract is at least as good as the current one. "From what I've heard they want to do a lot of downgrades to benefits and pension, and I don't feel that's fair especially since we've all been working so hard," she said.

In a statement issued in response to the union's claims, the hospital said, "Stony Brook Southampton Hospital is very supportive of our employees, and we are actively working towards a timely and successful contract negotiation."