Post-vaccinations, many are cautiously doing all the things they missed 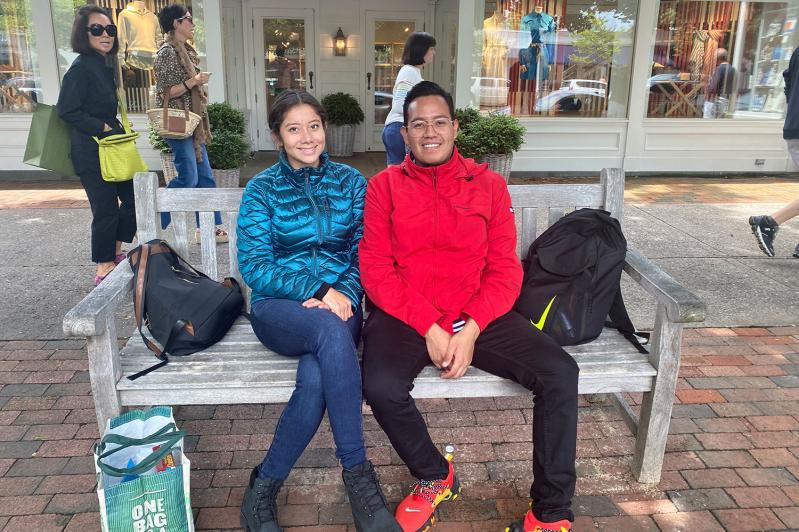 Feeling optimistic about the state of the pandemic, Elizabeth and Alejandro Smith hung out mask-free in East Hampton Village on Sunday.
Jamie Bufalino
By Jamie Bufalino

High Covid-19 vaccination rates on the South Fork are giving residents and visitors the confidence to return to their pre-pandemic routines albeit with a dose of caution.

The East End towns and villages have some of the highest vaccination rates in the state, according to data from the New York State Department of Health. As of July 4, more than 99 percent of eligible residents in Amagansett, Sagaponack, and Wainscott had been fully vaccinated, over 71 percent in Southampton and East Hampton, 74 percent in Watermill, 70 percent in Montauk, and 69.5 percent in Sag Harbor. Statewide, as of Tuesday, over 70 percent of all eligible New Yorkers 12 and older had received at least one dose of a Covid-19 vaccine.

"My life is more or less completely back to normal at this point," said Alex Boyko, who was visiting East Hampton from Boston, where he works at a hospital. He had been infected with the virus in December, and has since been fully vaccinated. "I was exposed to it a lot in the hospital, taking care of people with Covid, so now I'm a little less worried about resuming things," he said. He's comfortable with dining indoors at restaurants, and has even attended a concert.

"The turning point for me was when the C.D.C. released the mask guidance," he said, referring to the Centers for Disease Control and Prevention's announcement that it was now safe for fully-vaccinated people to go mask free except when on a plane, bus, train, or other form of public transportation.

Elizabeth and Alejandro Smith, East Hampton residents, have added one personal addendum to the C.D.C.'s guidance. "We wear masks when we go indoors for grocery shopping," said Ms. Smith. Otherwise, she said, "life here is fine."

Jay Decker was a bit more circumspect. Although he is okay with indoor dining, "I wouldn't sit on top of somebody, or if I walked into some pretty crowded place I may not stay," he said. His main source of concern? "People who didn't get vaccinated are probably not telling the truth about wearing masks," he said. "It will be interesting to see what happens after the summer with everybody out and about."

Carol Horowitz felt confident enough to have several houseguests for the Fourth of July weekend, she said, and she hasn't shied away from having other large gatherings. "I have a big family, and we're all together usually," she said. "I do wear a mask when people feel we should wear them, but if the general public is vaccinated then we're okay."

David and Ana Rosenberg, who were visiting family in Bridgehampton, are still on high alert for the virus. Although both were fully vaccinated, they were sitting on a bench outside Innersleeve Records in Amagansett "because I forgot my mask, so I'm not willing to go into the record store even though that's why we came," said Mr. Rosenberg. "We don't really want to be in mixed crowds where people are unmasked inside," added Ms. Rosenberg. When it comes to dining out, they only do it al fresco, but even that comes with risks, she said. "We were out to dinner outside a couple of weeks ago, and there was a woman at the next table coughing all through dinner, and it just made us feel uncomfortable."

"I am 100 percent back to normal," said Sumner Sykes, who was visiting from Philadelphia, and, along with his friend Julia Savasta attended a Fourth of July party with about 100 people. "A lot of stuff out here is outdoors, so it's easier," said Ms. Savasta. "I'm a little worried about the Delta variant, but for now I feel it's fine."

Although several people said they were okay with the idea of seeing a movie in a theater again, only one — Guillermo Matta — said he had actually done it, at a theater in New York City. "I was like okay, 'Let's try it,' because there was only 15 people allowed," he said. Everyone else either didn't think movie-going was worth the risk, or were hard pressed to find a film they wanted to see.