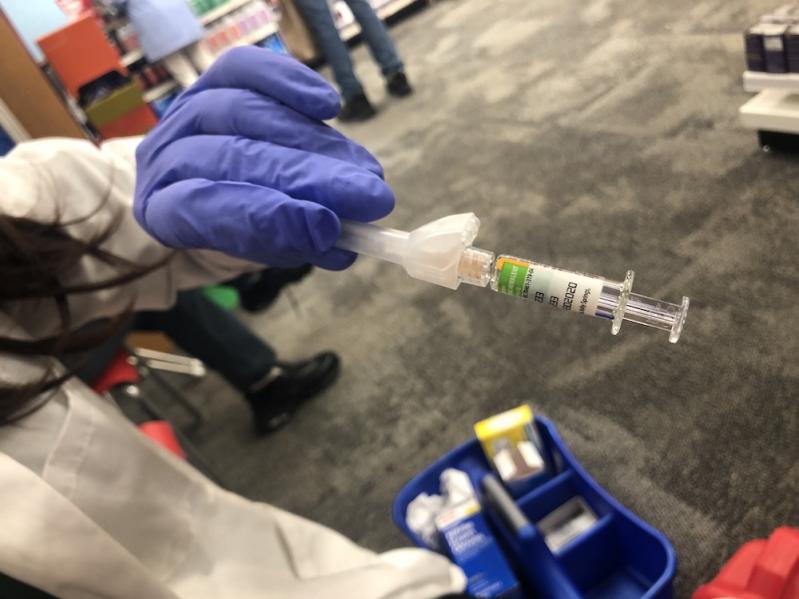 Vaccines, and specifically the influenza vaccine, are probably one of the best studied interventions in modern medicine.
Christine Sampson
By Joshua Potter, D.O.

Let's talk flu vaccines. As a general rule, they are a topic that I prepare to discuss each year around this time. As the humid heat of summer finally starts to give way to crisp autumn mornings, the health care community in general starts to think ahead to the coming winter months when respiratory viruses begin to run amok.

Accordingly, we begin to plan for our recurrent battle against arguably the best known respiratory virus, influenza. For better or worse(depending on who you ask), the best weapon we have in our arsenal against the seasonal flu is prevention, and that's where the yearly vaccine comes in.

For a variety of reasons, the influenza vaccine causes a lot of controversy. There are concerns that it can give someone the flu, that somebody might have an adverse reaction to a component in the vaccine itself, and about its effectiveness.

Before I write anything else, let me make one thing very clear: These are valid concerns.

They are valid because nobody wants to get sick. Nobody wants to have an adverse reaction to a medication. And, of course, we only want to administer medical interventions that work, that we know will help people or have a reasonably high level of confidence will do so.

Worrying about these things makes sense. I can't promise to completely alleviate these concerns if they are ones that you have, but I'd like to try to do my best.

Fortunately, vaccines, and specifically the influenza vaccine, are probably one of the best studied interventions in modern medicine. We know that the inactivated flu vaccine that is administered as an injection and which many people get each year cannot physically cause the flu, as the virus itself is essentially dead; there's just enough there to cause an immune response on the body's part, but no activity on the virus's part to cause illness. Yes, there are recombinant and live versions of the flu vaccine as well, but these only contain a single protein from the flu virus, and you cannot get the flu from those either as it is not the virulent component of the virus.

If someone does get the flu vaccine and then is sick with the honest to goodness flu within the two weeks after getting the shot, that's because it takes about two weeks for the vaccine to work -- in the time period leading up to that immunity development, you are still vulnerable to contracting the flu in the community. That's why getting a flu shot early in the season, practicing good hand hygiene, and this season, wearing your mask and practicing social distancing, are key to staying healthy.

And, of course, not only can you still catch the flu during this two week window, but there are plenty of other respiratory viruses running around at the same time that we don't have vaccines for.

With regard to adverse reactions, according to the World Health Organization, inactivated influenza vaccine is not associated with any higher rate of a systemic symptom such as fever, aches, or malaise when compared to placebo in blinded studies. Serious side effects such as Guillain-Barré syndrome may very rarely occur (.7 cases per million, less than the risk of Guillain-Barré when you contract the flu) and there were only four deaths related to anaphylaxis per 747 million doses of the flu vaccine from 1990-2005, according to data published in the journal Vaccine.

I should point out that for some time, the flu vaccine was made using egg components, so there was concern for people with egg allergy, but this has been well studied in recent years and even in patients with severe allergy to eggs, no serious reactions were seen. Similarly, there were concerns about gelatin-containing flu vaccines in the past in patients with alpha-gal meat allergies, but the recent intramuscular flu vaccines given in 2018-2019 seasons and beyond as far as I know do not contain any gelatin that would raise this risk. Of course, anybody with these conditions should still review with their doctors before getting the shot to be sure nothing changes each year, but they appear quite safe.

And as for effectiveness? Again, there's lots of data about this, and numbers cited include the fact that we know it varies year to year. But consistently, we see that the vaccine is effective at lowering the risk of serious hospitalization, including time spent in an intensive care unit, as well as of death, particularly among the highest risk populations, such as the very young, those over 65, and anyone with chronic respiratory conditions. As a community, we are charged in a civilized society with protecting the most vulnerable among us, and decreasing the risk of serious illness in these groups falls under this, in my opinion.

This is most particularly true this season. With the ever-looming fear of another serious wave of Covid-19 this fall and winter, avoiding anything that could put someone at risk for Covid-19 makes sense. We don't know yet if and when we will have an effective, safe Covid-19 vaccine, but we do absolutely know a huge amount about the influenza vaccine and how it can help to keep many of us, especially our most vulnerable, healthier, which gives Covid-19 a less fertile ground in which to wreak havoc.

For me, that may be the best reason to get a flu shot this year, and I hope it is one that everyone will strongly consider.