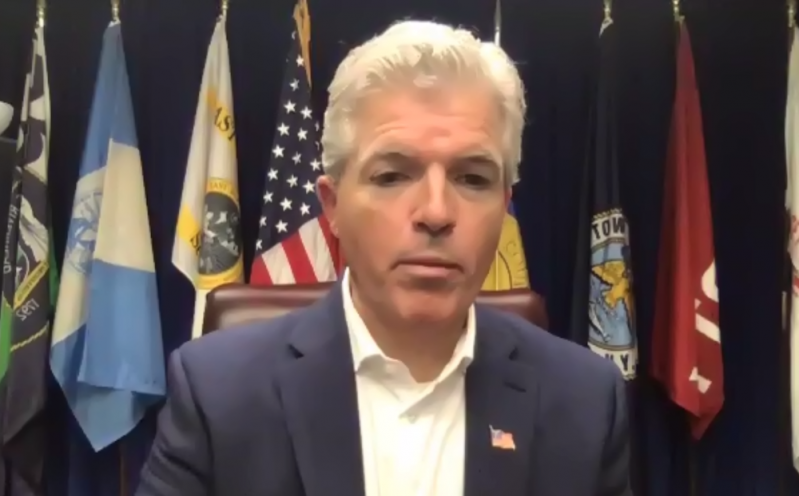 County Executive Steve Bellone in a file photo from earlier this year.
Zoom
By Christopher Walsh

Suffolk County Executive Steve Bellone angrily denounced President Trump on Wednesday, telling reporters that the president referred to federal disaster assistance as “some sort of bailout” during his fund-raising visit to the South Fork on Saturday.

“First off, we need federal disaster assistance in order to respond to and recover from Covid-19,” said Mr. Bellone, who has repeatedly called for such assistance. “As a county government, we are on the front lines . . . we need to fund our police officers, our public health workers, our schools so that we can safely reopen.”

Turning a recent catch phrase back at the president, Mr. Bellone said that “If you don’t support disaster assistance from the federal government, in essence you are supporting a policy that says it is okay to defund local government, defund the police, defund public health workers. I couldn’t disagree more. Support for federal disaster assistance is not a partisan issue, and it shouldn’t be.”

Mr. Trump wrote on Twitter on Saturday that Sen. Charles Schumer and House Speaker Nancy Pelosi “want to make a deal. . . . Where have they been for the last 4 weeks when they were ‘hardliners’, [sic] and only wanted BAILOUT MONEY for Democrat run states and cities that are failing badly?” Also on Saturday, according to a transcript of a press briefing at his golf club in New Jersey, he said that “what the Democrats primarily want is bailout money. It has nothing to do with the China virus,” as he often refers to the novel coronavirus.

The president told the New York Post in May that “I think Congress is inclined to do a lot of things but I don’t think they’re inclined to do bailouts. A bailout is different than, you know, reimbursing for the plague.” In the same interview, he said that “It’s not fair to the Republicans because all the states that need help — they’re run by Democrats in every case. Florida is doing phenomenal, Texas is doing phenomenal, the Midwest is, you know, fantastic -- very little debt.” As of Wednesday, Florida and Texas had each recorded more than 500,000 cases of Covid-19 infection and more than 1,000 deaths in the previous seven days.

Mr. Bellone, a Democrat, referred to Representative Peter King, a Republican serving New York’s Second Congressional District, who voted for the $3 trillion stimulus package known as the HEROES Act in May, as well as his own joint appearance on Tuesday with Dutchess County Executive Marc Molinaro, a Republican who ran unsuccessfully for Governor in 2018. “We were together calling on the federal government to provide disaster assistance. This should have nothing to do with politics. We are still in the middle of fighting a pandemic and weeks away from reopening our schools. We need the resources to continue this fight by funding our public health workers, police, and other first responders.”

New York, like New Jersey and Connecticut, is among the “donor states” whose residents pay more in federal taxes than their state receives back in federal funding. “We send billions on Long Island to other states every year through Washington,” Mr. Bellone said of that disparity, “but we don’t call that a bailout.” He also referred to the provision in the Republican-led tax overhaul of 2017 that capped the deduction for state and local taxes at $10,000, effectively raising taxes on many county residents.

Calling federal disaster assistance a bailout, he said, “suggests we did something wrong in Suffolk County, when the fact of the matter is we all did our jobs here in Suffolk County.” The federal Centers for Disease Control and Prevention, he noted, “said that in order to stop this, you need to reduce density and shut down the economy. That’s what we did. We listened to the federal government and shut down the economy.”

Suffolk County was successful in flattening the curve of Covid-19 infections, he said. “However, there was a cost to that response . . . the revenue necessary to fund government disappeared because of the shutdown, and the recession, of course, that it has caused and that we are still mired in today.” If the federal government “fails to do its job, to do what it always does in response to natural disasters, the burden ;is going to fall on the shoulders of local taxpayers, first responders, and essential employees,” Mr. Bellone said. “We don’t have time for the political nonsense . . . not when we’re talking about families in crisis and small businesses that are still struggling to survive.”

“When Marc Molinaro, Peter King, and Steve Bellone are on the same page,” he said, “that’s a pretty good indication that this has nothing to do with politics.”

As he did during 122 consecutive press briefings that ended last month, Mr. Bellone recited the county’s coronavirus statistics, which “remain in a very good place.” The 55 people who tested positive for Covid-19 in the last 24-hour reporting period bring Suffolk County’s total to 43,948. The 55 new infections were among 5,030 tests conducted, for a positive rate of just over 1 percent. “That is a very good number,” he said.

Thirty-three people remain hospitalized as a consequence of the coronavirus, an increase of two over the prior 24-hour period, and three are in an intensive care unit. Hospital beds in the county are at 71.6 percent capacity, with 861 available among a total of 3,034. Intensive care unit beds are at 66.8 percent capacity, with 131 of 395 available. Four people were discharged from hospitals.

The number of Suffolk residents who have died from Covid-19 infection remains 1,998. That Suffolk remains below 2,000 deaths “truly is a credit to all of the people who’ve been part of this response,” Mr. Bellone said, “first and foremost, the healthcare workers . . . all of the first responders, the essential employees who’ve been working throughout the crisis. But also the public, continuing to follow the guidance.”