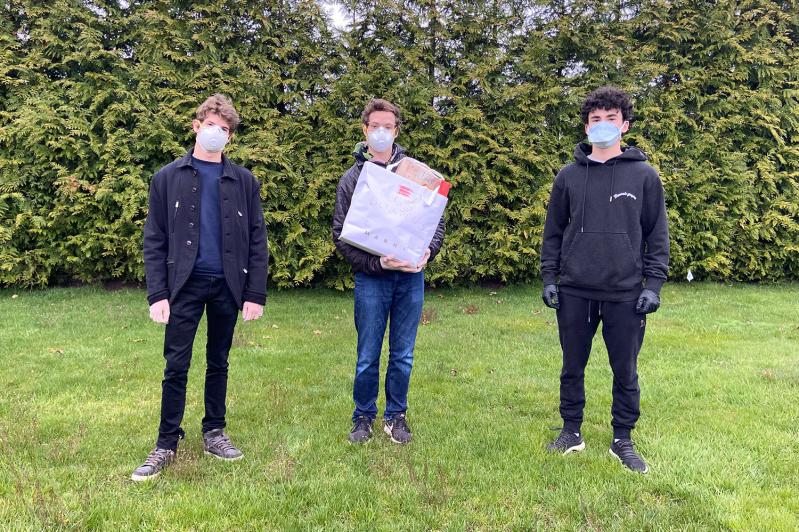 The 16-year-old founders of Doorstep Donations, Ben Gleeman, left, Jonah Gleeman, center, and Ryan Spiegel, wear gloves and masks to pick up donations around town, and then sanitize them before passing them on.
Doorstep Donations
By Bella Lewis

It didn’t take Ben and Jonah Gleeman long after coming from New York to their family’s house in East Hampton in late March to understand how deeply the Covid-19 shutdown must have affected the most vulnerable in this community. And when they reconnected with a former camp counselor who is now the youth pastor at an Amagansett church, they found a partner who could pair their idea of helping with the people who need it.

The twin brothers, who will be high school juniors next year, noticed when driving with their father by the train station in East Hampton that the day laborers normally waiting there for work were gone. The work had dried up, and the brothers realized that all those people who relied on it were “probably not getting the jobs they need to sustain themselves and feed their families.”

Teaming up with their friend Ryan Spiegel, whose family has a house in Sagaponack, they quickly turned their concern into action, forming Doorstep Donations, a service aimed at supporting people who are “struggling to support their families.”

“We want to help as many people as possible,” the three said in a conference call on Tuesday. Jonah and Ryan attend the Ethical Culture Fieldston School in the Bronx; Ben attends Trinity School in Manhattan. Their idea: Give people a way to donate canned and packaged goods without having to leave home, and then get those donations safely to those in need.

They started a GoFundMe page and launched a website to raise money for their efforts. On the site, people can leave their name and address to schedule a doorstep pickup of donations, then Ben, Jonah, Ryan, or someone from their team — clad in all the proper protective gear — will personally collect them and disinfect them before sending them on.

The trick was connecting to the people in help, and to do that, the Gleeman twins reached out to Diego Palomo, the youth pastor at the Vida Abundante New York, or VANY, Church in Amagansett. Mr. Palomo’s father, Oswaldo Palomo, is the pastor of the church, which conducts services in Spanish on Sunday mornings (virtually for now). Years ago, Mr. Palomo and his future wife, Jill, had been counselors to Ben and Jonah at the Hampton Country Day Camp, and she had also been their babysitter. Through Vida Abundante’s I Love My Town Ministry, Mr. Palomo already had a network of helpers who knew where the need was.

“Doorstep Donations inspired us,” he said. The I Love My Town ministry helped to identify senior citizens at the Windmill I and II complexes in East Hampton and the St. Michael’s apartments in Amagansett who needed extra help in these challenging times, and it also put out a call to its community connections asking for suggestions of others who may have lost a job or fallen on hard times. Then, working hand in hand with Doorstep Donations, it began to provide meals prepared according to specific dietary restrictions, fresh fruit and vegetables, groceries, paper goods.

“If you know a neighbor who is out of work, a friend, a family member, let us know,” Mr. Palomo said. “We don’t care where you are from, we just want to bless people and give them a little glimpse of hope.” Recognizing that many people are too proud to admit when they need a hand, many of these donations are left quietly, without contact, on the recipients’ doorsteps, a kind gesture with no strings attached. “This is a moment of need, and we believe the church needs to be a leader. It’s an opportunity to put Jesus’s message into action and give people a message of hope.”

Ryan, Ben, and Jonah want to continue Doorstep Donations even when the pandemic is past and social distancing is no longer the norm. As of Tuesday, they had raised nearly $8,500 through their GoFundMe page and had delivered more than 900 meals. They have expanded to Port Washington and Scarsdale, N.Y.

Those wishing to donate can do so online at doorstepdonations.com. Those who want to recommend a family or individuals in need of assistance can contact Vida Abundante Church at [email protected] or 631-356-8313 or via Facebook.

Hoedown on the Farm, Cocktails in the Garden
Main Beach Free Concerts in Final Weeks
Services and Counseling After Death of Popular Teacher Assistant
END_OF_DOCUMENT_TOKEN_TO_BE_REPLACED