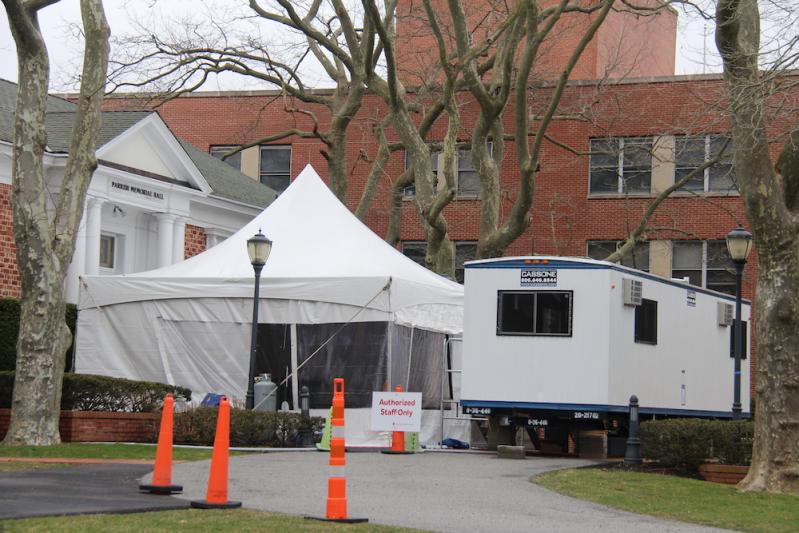 The Town of East Hampton now has 10 confirmed cases of COVID-19, the Suffolk County health commissioner said on Sunday evening, and there are 16 in Southampton, and 2 on Shelter Island. Southold Town had 91 confirmed cases.

The statistics came as the county reached a grim milestone, surpassing 1,000 cases of COVID-19 on Sunday, according to Dr. Pigott, with the Towns of Islip and Huntington leading the county with 217 and 210 cases respectively. Riverhead had 20, Babylon 166, Brookhaven 154, and Smithtown 71.

Twelve County residents had died as of Sunday afternoon, according to County Executive Steve Bellone in remarks delivered earlier in the day.

Another bleak statistic came from Mr. Zeldin when he responded to a constituent’s question about the federal government’s pending plan to spend at least $1 trillion to stimulate an economy ravaged by the pandemic. “There are estimates now that economic growth in the second quarter will be a contraction . . . potentially by one quarter,” he said. “One quarter of our economy will disappear in one quarter of one calendar year. That’s how severe an issue this is economically. We have a health issue and as a consequence of the health issue, an economic issue. . . . What we need is for our economy not to be annihilated by the impacts of what we’re going through on the health front, and a lot of small businesses” — which employ 50 percent of the national work force, he said —  “will not survive without the federal government’s help.”

Dr. Fries said that there is still a shortage of personal protective equipment among health care providers, including masks. “We are still having issues with testing capacity,” she added. Gov. Andrew M. Cuomo on Sunday called on the federal government to implement the Defense Production Act to direct companies to produce medical supplies like ventilators and masks. States and hospitals are competing with one another for essential supplies, he said in a statement, and there is significant price gouging.

Dr. Fries said that even if only 1 percent of the county’s 1.5 million residents becomes infected with COVID-19, “we’re talking 15,000 patients, 3,000 hospital admissions, and 750 may need a bed” in an intensive care unit. There are 2,300 hospital beds in the county, she said, 10 percent of them in intensive care units. “The hospital system across the nation, and in every nation, is not set up to deal with so many sick patients at the same time,” she said.

But the New York City region accounts for roughly 5 percent of the world’s confirmed cases, The New York Times reported on Sunday, making it an epicenter of the pandemic. Mr. Cuomo estimated that 40 to 80 percent of the population will become infected with the virus.

To slow the virus’s spread, Dr. Fries and Dr. Pigott pleaded with people to practice social distancing, Dr. Fries calling it “our civic duty to follow the direction of the governor of New York.” Their remarks were delivered in the hour before Mr. Cuomo’s directive that non-essential businesses either close or institute work-from-home policies went into effect at 8 p.m. “It’s really, really important to slow this down,” Dr. Fries said. “We need to curtail this pandemic so that we in the hospitals can deal with the numbers.”

More than 2,000 had been tested at the mobile site that opened last week at Stony Brook University, Mr. Bellone said earlier in the day. Hours later, Mr. Zeldin said that “it would be fantastic if there is a second drive-through site opened on the East End,” but provided no information as to plans for one.