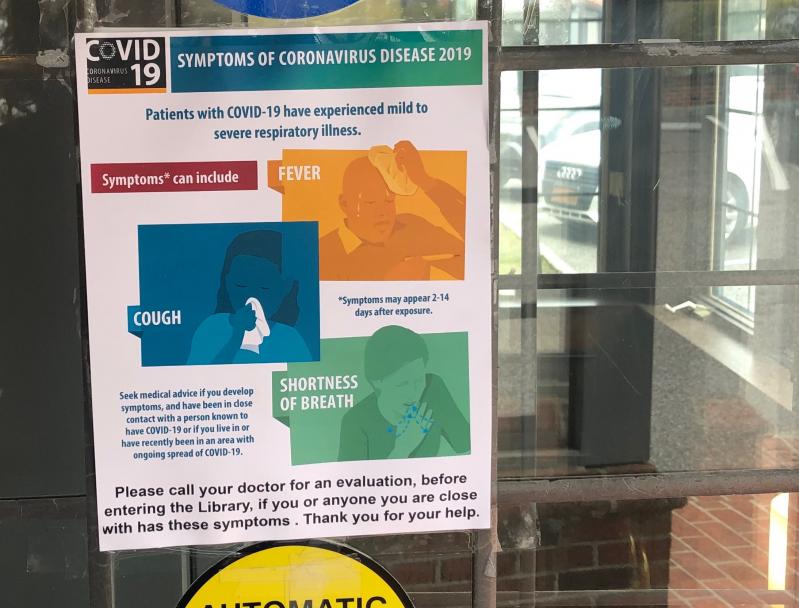 A flier posted on the door to the East Hampton Library; Suffolk County has recommended "social distancing" for older residents.
Carissa Katz
By Christine Sampson

Update, March 14, 1 p.m.: There remains one confirmed case of COVID-19 in East Hampton Town, County Executive Steve Bellone said Saturday during a press conference at about noon, as the number of cases in Suffolk rose to 37.

Fourteen of those confirmed cases are Southold Town residents; three of them are employees at the Peconic Landing retirement community in Greenport. There are also 104 people in mandatory quarantine across the county, Mr. Bellone said.

The first COVID-19 death in New York was reported early Saturday morning, and is a New York City woman in her 80s who also had emphysema, Gov. Andrew M. Cuomo said during his own press conference on Saturday. The number of cases in New York climbed to 524 by Saturday morning, he said, up 100 from Friday. Long Island has 70 patients currently, he said.

At a separate briefing, Nassau County Executive Laura Curran said people must continue to practice social distancing and take every precaution they can. “Community spread is the biggest danger right now,” she said.
Mr. Bellone was speaking in front of the Gurwin Nursing Home in Commack, one of the 96 facilities in Suffolk County to receive a supply of New York Clean, the state-produced, alcohol-based hand sanitizer being distributed for free.

Mr. Bellone put out a message of gratitude to the doctors, nurses, police, and first responders who are putting others first.

They “are literally on the front lines of this,” Mr. Bellone said. “What they do every day is important, but you really have to appreciate the work and the public service they provide. Take a moment to do that during a crisis like this.”

Update, March 13, 3 p.m.: As of midday Friday, Suffolk County had 28 confirmed cases of COVID-19, County Executive Steve Bellone said at a 12:30 press briefing. These included 1 in East Hampton Town and 11 in Southold Town, where three employees of the Peconic Landing retirement community in Greenport have tested positive for the virus.

Where there are confirmed cases, communicable disease professionals are investigating who the infected people have come in contact with. "We want to make sure anyone exposed to the virus is isolated," Mr. Bellone said. At the time of his briefing, 57 individuals in the county were under mandatory quarantine.

"If you are feeling under the weather, stay home," the county executive urged people.

In coordination with school administrators, the county is recommending that all non-instructional after-school activities be suspended, and many schools are closing. The state has said that a school should close for a minimum of 24 hours if there has been a confirmed case within the school.

Gov. Andrew M. Cuomo on Friday said that drive-through testing will now be available in New Rochelle, the New York community hit hardest by the coronavirus outbreak, and could soon be available elsewhere. People who are symptomatic will be able to make an appointment and wait on car lines. "The medical staff comes to you, does the test, takes the swaps, and you pull out. . . . It's not only faster and easier, it's also smarter and safer."

Testing is still not widely available in the state. "No one should expect to just walk into a doctor's office and get a test," Mr. Bellone stressed.

"I don't believe this will be a short term issue," the governor said. "We are looking at a seven, eight, nine-month affair. . . . I think people should start to recognize that. It's not going to be over in 30 days or a couple of weeks."

With that in mind, the county executive recognized the "real impact to businesses here," and said the county's Department of Economic Development and Planning has been directed to develop a business response plan. County officials are working to establish guidance for employers,

Update, March 12, 10 p.m.: By Thursday evening the number of Suffolk County residents testing positive for COVID-19 had reached 21, including the first in East Hampton Town, a woman in her late 70s, and nine cases in Southold Town.

As of Thursday afternoon, there were 16 cases in the county, eight of them in Southold Town, Mr. Bellone said. Those include an employee of the Southold Fish Market, which is closed for cleaning. The Greenport School was also closed on Thursday. The county's first confirmed case was in a Southold man who worked for the Greenport Harbor Brewing Company in Peconic; he is being treated at Stony Brook Southampton Hospital and was reported to be improving.

None of those who tested positive for the novel coronavirus are residents of East Hampton or Southampton Towns. Of the 16, 10 are in mandatory hospital isolation and six are in mandatory home isolation, the county executive said. Forty-nine additional individuals are under mandatory home quarantine, required when someone has been in direct contact with a person who tests positive for the virus, and 76 are under precautionary quarantine for travel-related reasons.

The county has urged "social distancing" for all older residents. It has also recommended that all parades scheduled for this weekend be postponed. Locally, the Am O'Gansett Parade is among the many St. Patrick's Day festivities originally planned for this weekend.

Mr. Bellone says he expects positive cases in the county to continue to rise. "This is a rapidly moving situation."