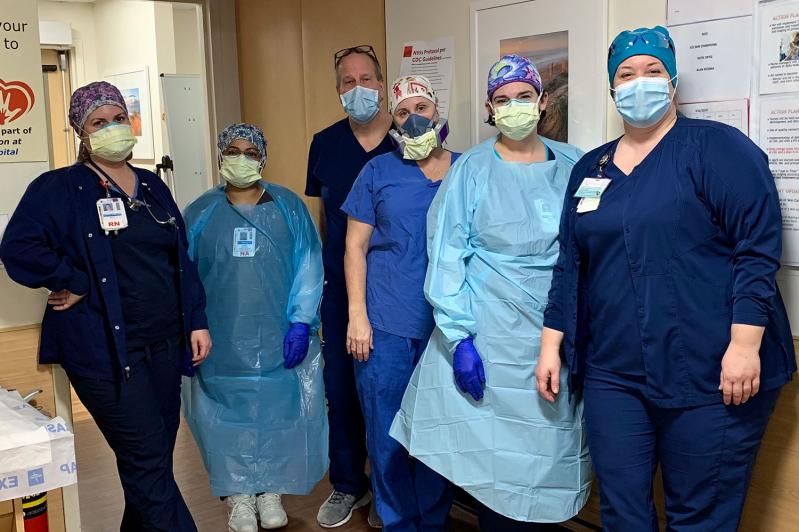 From the early days of the pandemic, hospital workers on the front lines of the war on Covid-19 have been celebrated as heroes, but Samantha Jiudice, an intensive care unit nurse at Stony Brook Southampton Hospital, doesn't feel like a hero.

"I'm a nurse and I got a degree and I took an oath to help people," said Ms. Jiudice, who, as an I.C.U. charge nurse is something "like the foreman" for the unit. She is the go-to for other staff on the floor, the one who knows the policies, the physicians, and the standards of care, who knows where patients are coming from and going to, what the hazards are and what needs to be fixed. It's an important job made even more important by the fragile condition of the unit's patients, but Ms. Jiudice is quick to give credit not only to her fellow nurses and to physicians, but to everyone on the hospital staff.

"It's just not me and the doctor. It's me, the doctor, the aide, the secretary, the environmental service worker, the engineering worker, the pharmacy staff, even security . . . X-ray, everybody in the building."

If one of them is a hero, all of them are -- every year, but this year more than ever.

On March 8, Stony Brook Southampton Hospital became the first hospital in Suffolk County to admit a confirmed Covid-19 patient. Hospital staff had been preparing for that eventuality. "We had been talking about how to isolate them, because they need negative-pressure rooms," Ms. Jiudice recalled. But when the first patient -- a 42-year-old from the North Fork -- arrived, "It was chaotic, emotionally."

Ms. Jiudice, 41, a nurse for 20 years who has worked at the hospital in Southampton for 16, said she was almost never scared on the job before Covid. She knew the standards of care and the personal equipment she needed to protect herself from infectious diseases like meningitis or tuberculosis. But when it came to the novel coronavirus, "It was terrifying and intimidating, because we didn't really understand how we transmitted it and what we needed to protect ourselves from it."

When the hospital began to fill up with patients who were "all so sick at the same time with the same thing," Ms. Jiudice said, "that's when it really got hard . . . and everything we were doing felt like it wasn't helping."

"You'd go in shift after shift after shift and you'd say, 'Why isn't this working? We know how to take care of patients with all these other problems. They're similar, but they're not getting better.' . . . You'd leave feeling so drained and so defeated."

For an I.C.U. nurse, the hardest thing during the pandemic has been holding up a phone so family members can see patients "who they can't physically touch and be next to when the patients were at the end of their life. That was torture. . . . The piece where their family can't be there, it's just so heartbreaking to not be able to let them be there or come say goodbye in the normal way. It's just awful . . . so intensely awful."

Outside of work, when she saw people standing close together, not wearing masks, "It really felt like getting stabbed in the back, because you were fighting every shift to keep these people alive . . . and then you see people not following the rules, and you say, 'Why am I working so hard? Don't they get it?' "

Layered on top of that sense of helplessness were concerns about potential shortages of personal protective equipment in the medical setting. "In the very beginning . . . we were like, 'how will we make our own respirators?' . . .  Some people bought their own supplies in case we needed to make shields."

"Everybody was just so anxious," she said. "You do everything you're supposed to do to take care of your patient, you clean all your equipment how you're supposed to, you wash your hands, you're cleaning your work station, you're coming home from work, you're cleaning your house." Ms. Jiudice lives with her husband and 6-year-old twin daughters in Riverhead, and time outside with them gave her the "respite" she needed from the physical and emotional rigors of treating Covid patients. "It was just this constant gnawing, like, 'I think I did everything right' . . . and then as time went on the rules changed. There'd be new recommendations from the C.D.C., and you'd be worried about protecting your family, protecting your patients and your co-workers."

"People would say, 'Well, you became a nurse, you should expect this,' " Ms. Jiudice said. "I became a nurse . . . but I never wanted to be a soldier. I'm not a soldier, and in a lot of ways it felt like that." The unknowns of Covid and how it attacked the body were so different, the patients' ailments so acute and confounding, the circumstances so "surreal," she said. "And you would never think, ever, that you wouldn't have enough masks."

Gradually, the anxiety about P.P.E. lifted and medical staff began to understand better how to treat people with the virus. "And now, when the patients come, in our heads . . . we have a checklist. It's not easier, it just comes more comfortably because we've experienced it already." For the most critical Covid-19 patients who recover after being on a ventilator, Ms. Jiudice has observed that a key element of their return to normal is time. "You just have to let them have time to let their body recover."

At the height of the pandemic's first wave, Stony Brook Southampton had 51 patients with Covid-19, 20 of them in the I.C.U. One woman was hospitalized for 120 days, including four weeks on a ventilator. After her release on July 31, the hospital was Covid-free for a little over a week, and in October, before the post-Halloween spike in cases around the state, it went 11 straight days without a Covid patient, according to a spokeswoman.

In the past month, as the virus surges to heights not seen since the spring, the hospital has again ramped up its capacity, including in the I.C.U., and workers are preparing to meet all of the challenges that come their way.

"I decided to do a job where I help people, and in my job, we help the sickest people, we're the last stop on the train," Ms. Jiudice said. "All of us are very good at our jobs, and I think what keeps us going a lot is that camaraderie among staff. Nobody lets anybody else sink."

Support from the community has also been buoying. The meal trains, the drive-by parades, so many donations of masks and caps and personal protective equipment, those really made a difference. But the most important way to show health workers that you support them, Ms. Jiudice said, is for "people to do what they need to do to help us. We just need people to social-distance and wear their masks, just for this period."

"I just keep hoping that people will help, that society will help," she said in mid-December. "I hope that people will just give up this one Christmas to help bring the numbers down so that the hospital isn't full and then people with other problems don't have to wait. . . . We never reached a point where we had to make terrible decisions, and I don't ever want to reach that point like they had to in other states."