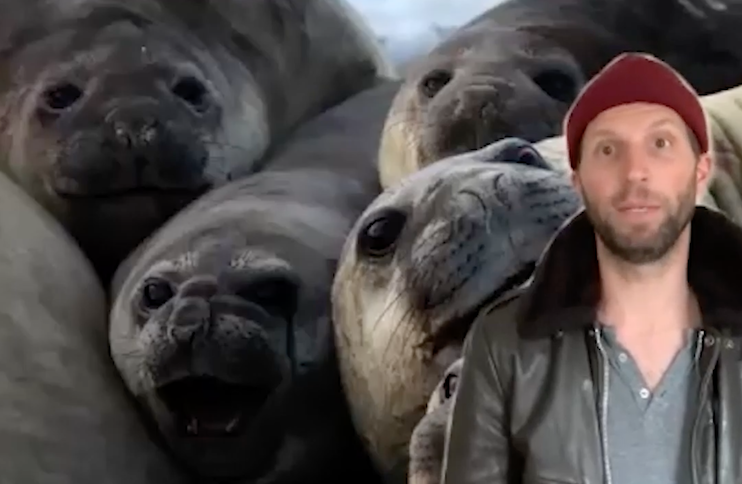 A scene from "Too Many Seals," a film by a New Jersey student that was chosen for Make It Together.
By Christine Sampson

A new, ongoing program at Guild Hall challenges children to write original film scripts that can be performed and filmed remotely by professional actors, directors, editors, and designers.

Called Make It Together, the program is a national initiative that originated with the Middletown Arts Center in Middletown, N.J. The goal is to give children a foray into screenwriting while keeping them busy with a creative writing project that is not necessarily tied to schoolwork, said Josh Gladstone, the artistic director of Guild Hall’s John Drew Theater.

"You’ve got the kids' words translated by these interpretive artists who are seasoned television and theater actors," Mr. Gladstone said. "We are in an ideal place to sort of act as a broker and connector and create synergy between these young kids, who are raw, creative talent, and the seasoned pros. We can 'make it together.'"

The program is for children ages 7 through 13. Scripts should be about five pages, and should be in a particular format that can be found at guildhall.org. They should be focused on a central theme or question posed by the folks at Make It Together. "Two people find a treasure. What's inside? How do their lives change?" is this week's question.

Submissions should include the writer's name, age, hometown, and contact information. If selected, the writer will be asked to make a video introducing himself or herself to be included with the final product. Scripts can be emailed to [email protected]. The finished videos will be on YouTube and social media, and promoted by the national Make It Together group.

"It's an invitation to a collaborative process that these kids might not otherwise have," Mr. Gladstone said, "and a way to create a sense of virtual community."

East Hampton Samples Are a Crucial Contributor to Lyme Test
Ready to Adopt a Pet? ARF Is Ready, Too
Guild Hall's Curator Visiting Studios Virtually Through June
Seeking Stories and Images From the Time of Covid
END_OF_DOCUMENT_TOKEN_TO_BE_REPLACED