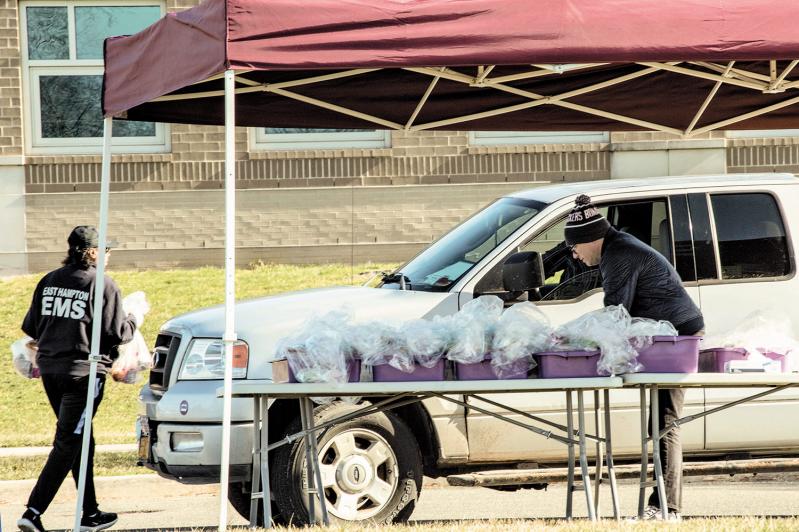 Meals for all children 18 and under are available on a grab-and-go basis at the East Hampton School District office on Long Lane, next to the East Hampton High School.
Doug Kuntz
By Christine Sampson

Alexandra McCourt of East Hampton is keeping her 8-year-old son, Stefano McCourt-Rodas, busy with reading and math activities while school’s out. Gym class looks like walking the dog, hiking, and doing pushups. They wake up at the usual time each day and eat breakfast together.

But she admits to being concerned about her kids — though not Stefano. Ms. McCourt happens to be a teacher, so she’s not worried about her own son keeping up with his studies. She’s more focused on her students at the East Hampton Middle School, where she teaches English as a new language.

“I have students who have checked in online, but then I have kids who haven’t, and I can’t be there to force them to do that,” Ms. McCourt said by phone yesterday morning. “I think those that put the time in will be okay, but if people are not there helping their children and ensuring they are doing the work, those kids are going to fall behind.”

Gov. Andrew M. Cuomo this week ordered schools statewide to close through March 31 because of the COVID-19 pandemic. Some districts here had already announced plans to close for two weeks, but the governor made it official. Many administrators believe the closure will be extended.

While remote learning hasn’t officially started yet in East Hampton or Bridgehampton, among others — this week is technically being taken as unused snow days, and spring break has been moved up to next week in most cases — teachers across the region have already begun engaging with their students in some fashion. On Tuesday, Ms. McCourt suggested that her kids send silly photos of themselves wearing green for St. Patrick’s Day.

And at Sag Harbor Elementary School, there’s an all-hands-on-deck approach to pulling off morning program, the popular daily tradition in which students gather in the school gym to start the day with songs, presentations, announcements, birthday celebrations, and other activities. Matt Malone, the school’s principal, and his faculty are putting together online versions of the program, which starts out with the Pledge of Allegiance.

“We’ve had a great year, and now we face a challenge,” Mr. Malone said during Monday’s video. “Our learning journey looks a little different now. Things are going to be okay because Sag Harbor sticks together.”

Jordana Sobey, the Sag Harbor School Board president and a parent of two elementary students, said having morning program “made several moms and dads tear up. I don’t know if [from] joy or not. Somewhat joy. Somewhat emotional, I think. Happy to have some normalcy return.”

Erica Huberty of North Haven, whose children attend the Bridgehampton School and the Hayground School, is also trying to maintain normalcy in the face of homeschooling for the first time. “In an ideal homeschooling situation perhaps we would have a bigger group of kids,” Ms. Huberty, a writer and artist, said. “Maybe I’d be teaching everyone’s kids Jane Austen and someone else could teach the kids math, but we can’t do that because we have to do social distancing and quarantining. We’re super isolated.”

But then electronic devices have “saved the day,” she said. That’s how kids are connecting with one another and learning right now. “It’s actually been really helpful to have . . . even though most of us are usually like, ‘Get off your phone.’ “

But not everyone has access to computers, tablets, or smartphones. It’s a reality that Richard Burns, the East Hampton School District superintendent, is trying to address. “We’re going to do outreach to see if students have connectivity, number one, and also a device,” he said. “We’re pretty lucky in that most students in grades 5 to 12 have devices already. At this point we’re determining if kids have computers at home, and if they don’t, we will supply them.”

Mr. Burns said Altice, the regional provider of cable and internet access, has offered 60 days of free Wi-Fi to all students regionally who would not otherwise have internet access — an arrangement that he said Chuck Westergard, who manages the district’s information systems, helped secure. Those who need the service can call Altice at 866-200-9522.

The East Hampton, Bridgehampton, and Sag Harbor School Districts are also providing food service while schools are closed. In East Hampton and Bridgehampton, all students can now access those meals, including both breakfast and lunch. Sag Harbor’s food program is limited to those who were already in the free and reduced-price federal lunch program.

But this week, Bridgehampton administrators scrambled to come up with a plan, and on Monday, they went to McDonald’s and bought hundreds of meals for students. Starting Tuesday, families could pick up breakfast and lunch at the First Baptist Church of Bridgehampton, or request a delivery by school bus. Bridgehampton’s bus provider, McCoy, is helping out in that regard.

“It’s unbelievable — a nice partnership,” Robert Hauser, Bridgehampton’s superintendent, said of the relationships with the bus company and the church, where a number of staff, school board members, and students are regular congregants.

In East Hampton, meals are available to all students on a grab-and-go basis at the bus loop in front of the district office on Long Lane next to the high school. Initially it was just for students on the free and reduced-price lunch program, but Mr. Burns said it is now for all students in the area.

N through Z. “Hopefully we have enough,” he said. “We’re servicing all children 18 and under — they don’t have to be students. . . . We have buses to maybe do some deliveries. We’ll determine the need and then move in that direction. Every day you just go forward.”

Schools also have to make arrangements for special education students to receive their individual services, such as speech or occupational therapy, and many will be connecting teachers of English as a new language to their students for one-on-one video conferencing sessions.

Mr. Burns called it a “fluid but difficult” situation. “I don’t think it has hit the kids yet, to be quite honest. It’s only been three days,” he said by phone yesterday. “But those structured days are gone. I’m sure it’s going to hit them. Social workers and guidance counselors are reaching out to families — they’ll be okay, but it has to take its toll. Just like us. Adults are having a hard time coping, too.”