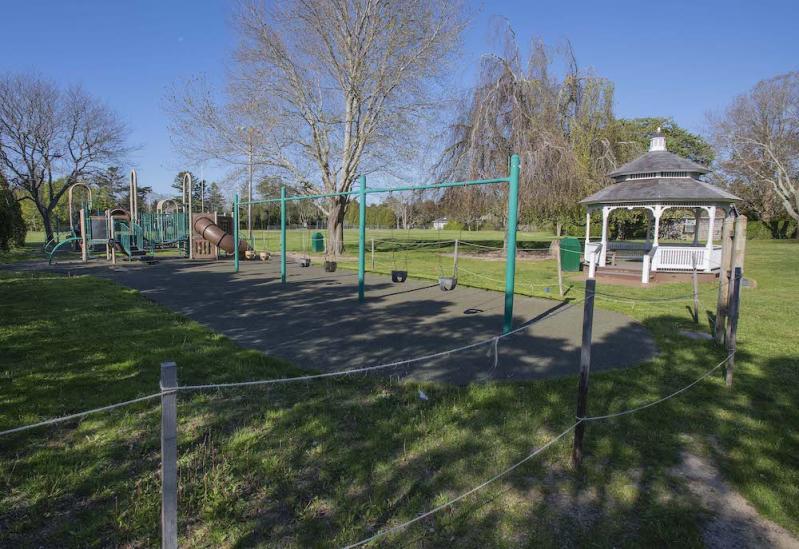 The village's proposed budget would allocate no money for the planned renovation of Herrick Park; instead the village will continue to seek grant money and private donations for the project.
Doug Kuntz
By Jamie Bufalino

Due to concerns about the economic impact the Covid-19 pandemic may have on East Hampton Village’s finances, village board members made it clear last Thursday that they will adopt a budget for the next fiscal year that will prohibit spending on any major capital improvements, public works projects, or equipment upgrades.

Becky Molinaro Hansen, the village administrator, presented a tentative budget of just over $23 million. It includes a nearly 2 percent increase from last year, as well as reduced expectations for revenues. Given the economic uncertainty caused by the pandemic, she said, “the revenue side of the proposed budget is very conservative.”

In drafting the pared-down budget, Ms. Hansen said in an interview on Tuesday, the village is anticipating that fees collected for building permits might continue to plummet due to the shutdown of construction sites, sales tax revenues will likely be much lower due to store closures, and, if the real estate industry remains in limbo, mortgage reporting tax revenues might also be low. If the financial outlook improves, she said, the budget can be adjusted accordingly.

The tentative budget proposes raising property taxes by 3 percent, which would pierce the state-mandated cap by about $50,000. The village has “limited options to raise revenue other than through property taxes,” Ms. Hansen told board members.

The most significant spending increases include contributions to village employees’ retirement funds and Medicare reimbursements for retired employees. The village will also spend $70,000 for a new mobile parking enforcement system for the Police Department.

Other equipment purchases, including everything from a copy machine to a new police car, will be put on hold, Ms. Hansen said.

The proposed budget would allocate no money for the planned renovation of Herrick Park, but the restoration of the Dominy shops, which is being funded through donations, and the ongoing renovation of Village Hall, which is being financed with money from a capital reserve fund, would continue when the state lifts the lockdown on construction. Rose Brown, a trustee who, with Arthur Graham, leads the committee on the Herrick Park renovation, said the village will continue to seek grant money for the project, as well as private donations.

A virtual public hearing on the proposed budget will be held when the board meets on June 4.

The financing for the renovation of Herrick Park may be delayed, but board members got a look at the latest iteration of a plan created by the LaGuardia Design Group. Ian Hanbach, a partner in the firm, said the latest version takes into account suggestions from village residents who weighed in on the redesign at a board meeting in December. The large attendance at that meeting, he said, “made it very clear to us how excited everyone is about the prospect of achieving this park’s potential.”

The prospect of having a regulation-size football field in the park was particularly appealing to two people at the meeting: Joe Vas, the athletic director of East Hampton High School, and Joe McKee, the school’s football coach. “My hope is to bring back night football games,” said Mr. Vas at the time. To make that a reality, the new design features a regulation-size field that runs east to west in the park’s main ball field.

More benches and other seating have been added throughout the park, and in the southeast corner of the adjacent Reutershan lot, there is a designated area for parents to drop off and pick up their children.

One element of the design — the repositioning of the children’s play area to the north side of the section near Newtown Lane — elicited a complaint from a next-door neighbor, Ami Schulman, who worried that the noise would be a constant nuisance. Mr. Graham and Ms. Brown promised to meet with Ms. Schulman and figure out a way to address her concerns.

The board also discussed restoration plans for a vacant one-acre parcel on Ocean Avenue bordering Hook Pond, which the village wants to maintain as open space with a scenic vista. Last year, East Hampton Town purchased the property on behalf of the village, using money from the community preservation fund. Billy Hajek, the village planner and a member of the town’s water quality advisory committee, recommended the removal of phragmites and other invasive plants from the parcel, establishing a buffer along the Hook Pond shore line, and regrading portions of the property adjacent to the Main Beach parking lot.

“The plot looks scruffy,” said Mr. Graham. His colleagues agreed, and were especially eager to remove a few evergreen trees to improve the view. Ultimately, however, they decided to hold off, and let the town use C.P.F. money to restore the property and its wetlands.

Jerry Larsen, a candidate for East Hampton Village mayor in the upcoming election, called in at the end of the meeting to urge the board to permit restaurants to use public sidewalks for outdoor dining once they are allowed to reopen. Because of the social distancing mandate, restaurants will likely have to limit their indoor seating, he said, and having tables outdoors “will go a long way to helping them recoup some of the money they’re going to lose.”

Mayor Richard Lawler said the village is considering the idea, and exploring the possible legal ramifications.

In other business, the board approved the installation of wi-fi equipment at Georgica Beach at a cost of $13,310.95, as well as the hiring of seasonal beach staff, paramedics, critical emergency medical technicians, and traffic control officers and specialists. Joseph Tringali, Matthew Griffiths, Michelle Miller, Meghan Harris, and Armann Gretarsson were hired as seasonal police officers.