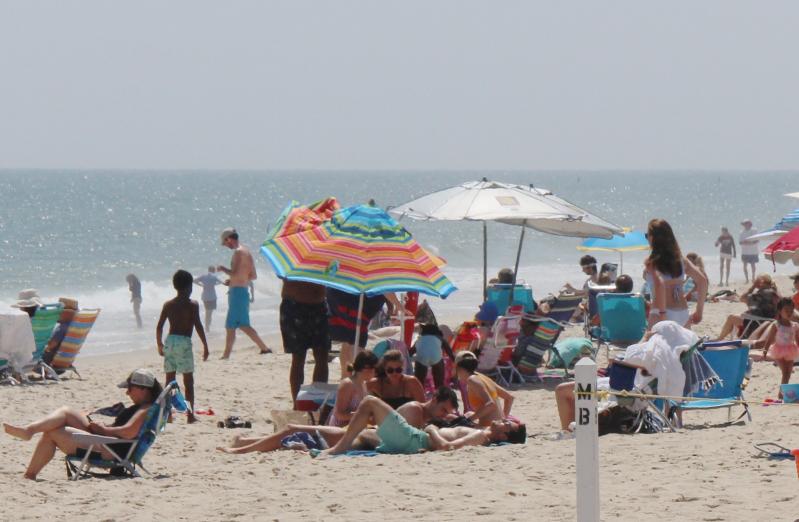 Beaches were full, but the East Hampton Town police chief did not point to them as major daytime problem spots over the Fourth of July weekend.
Durell Godfrey
By Christopher Walsh

"An extremely busy Fourth of July" weekend came and went in the "summer like no other," as East Hampton Town Supervisor Peter Van Scoyoc called it in the town board's post-mortem discussion on Tuesday.

With all eyes on places most likely to draw crowds -- principally nightspots in Montauk and the town's beaches -- the supervisor and East Hampton Town Police Chief Michael Sarlo said that most commercial establishments and the public showed "very good compliance over all," the "vast majority of businesses" adhering to protocols designed to prevent transmission of the coronavirus and resulting Covid-19 infection that has disrupted the town's tourism-driven economy.

There were outliers, however. Days before Long Island entered the fourth of a four-phase reopening of the economy, which happened yesterday, owners or managers of three Montauk nightspots were cited for low-level charges having to do with alcohol storage and signs, allegations that may lead to more serious consequences for Rick Gibbs of Rick's Crabby Cowboy, Vincenzo Lentini of Ruschmeyers, and Jeffrey Capri of Nick's on the Beach.

"There were very large gatherings and flagrant flaunting of the safety protocols we've all been trying to live by," Mr. Van Scoyoc said of the three Montauk establishments. They have been referred to the New York State Liquor Authority, which has the power to revoke liquor licenses, he said. The supervisor said that he would ask the S.L.A. to suspend the licenses "of businesses that continue to flagrantly violate" public health laws.

Videos shared on social media show young patrons without masks on densely packed dance floors at multiple Montauk nightspots. A town detail -- a police sergeant, an officer, and a fire marshal -- visited businesses to check on compliance with state orders aimed at slowing the spread of the novel coronavirus. The rules limit restaurants to half capacity, and mandate that alcohol be served along with food, and only to groups of guests seated -- not standing -- at least six feet apart.

In a video reportedly taken at Rick's, on East Lake Drive, a crowd of men and women under a tent can be seen on their feet, dancing and singing along to Neil Diamond'sÊsong "Sweet Caroline," as others wait on a line outside to join them. One man, holding what appears to be a bottle of alcohol, is lifted into the air by another and bounced up and down in time with the music; neither is wearing a mask.

"We can't allow ourselves to become complacent," the supervisor said. "We want to have the best possible summer we can, and that's going to be reliant on everybody following those basic rules" including wearing a face covering in public and maintaining distance from others. "Be patient about the number of people here, try to give each other space, be respectful of the town," he said.

Chief Sarlo said that the Police Department logged nearly 450 calls between Friday morning and Monday morning, 120 of them on Saturday night alone. "This weekend, across the board, was one of the busiest we've ever had," he said, citing the holiday weekend, favorable weather, and "people looking to get out and about" as Long Island moved through phase three of reopening. Illegal fireworks, noise, and traffic accidents dominated the complaints, he said. "We were obviously spread very thin for most of the weekend."

Crowded restaurants present the highest risk of coronavirus transmission and thus an area of elevated concern, the chief said. "Across the board, much more compliance than not," was his assessment.

A specialized team was dispatched to look for "S.L.A. violations and Covid violations," the chief said. The three nightspots in question were cited for misdemeanors under the state's Alcohol Beverage Control Law. In follow-up investigations, he said, violations of the state Public Health Law were also observed, and video and photographic evidence posted by the public to social media was also forwarded to the S.L.A., he said. "We will defer to the S.L.A. and work with them to see what further actions we can take under the Public Health Law and the S.L.A. law."

Mr. Gibbs defended his venue yesterday, saying that a brief incident had been profoundly mischaracterized. "Three tables got up when Neil Diamond's song came on, and it was quickly squelched," he said. "The whole day we were doing everything we're supposed to do Ñ table spacing, outdoor venue, hand sanitizers on every table. We're a family restaurant seven days a week, we have entertainment Friday and Saturday night until 12. We had four inspections that day, by multiple agencies."

He said that patrons at three tables had spontaneously gotten up to dance, each remaining within their respective group. "For the S.L.A. to close me down for that. . . . What is he looking for, political drama?" he asked of Mr. Van Scoyoc. "Go to Ditch [Plain Beach], there's 10,000 people walking on the beach, nobody's got a face mask on, and I've got three tables get up and dance."

A statement issued on behalf of Ruschmeyers emphasized that Mr. Lentini was not arrested but rather issued an appearance ticket for violations unrelated to public health. "The Fire Department actually complimented the way Lentini and Ruschmeyers staff were complying with Covid restrictions," it said, "including having a clicker at the entrance to track the number of patrons, tables being spaced 15 feet apart, the enforcement of guests wearing masks whenever they were not at their table (i.e., bathroom), and employees wearing masks and gloves."

Mr. Gibbs suggested, as at least one other Montauk restaurant owner has this summer, that some venues are calling authorities on one another in an effort to impair their competition.

No one answered a call to Nick's on the Beach on Tuesday.

In Amagansett, the parking lot at Atlantic Avenue Beach was closed for 60 to 90 minutes on Saturday when its reduced capacity was reached. Chief Sarlo credited lifeguards and Parks and Recreation Department officials with promoting social distancing and the wearing of face coverings at the appropriate times.

The chief also referred to beach fires that were not in a container, as mandated by town code, smoldering embers of which can injure beachgoers long after the fire is out. In at least two instances, he said, fires had been set dangerously and illegally close to a lifeguard stand.

Phase three of reopening stipulated a 25-person limit to gatherings. "That doesn't mean you can have a party for 25 people," the chief said, adding that social distancing is to be maintained among people not of the same household.

Councilwoman Sylvia Overby referred to complaints aired at Monday's meeting of the Montauk Citizens Advisory Committee about what were characterized as share houses, with up to 17 vehicles parked on a property. Most complaints were about noise, she said, but "one person was very concerned about health and safety issues" given the number and density of people in such an environment.

A town official who asked not to be named spoke on Tuesday of a house in Montauk at which an estimated 200 or more people, virtually none of them wearing a face covering, had convened. A charge of a mass gathering without a special event permit was leveled.

"We try to prioritize, do the best we can," the chief said. "Simply through sheer numbers, we can't have an officer at every one of these locations asking for compliance."

Mr. Van Scoyoc asked that members of the public make the town aware of violations, rather than simply posting evidence to social media sites. "We worked really hard in the reopening process" with the Business Recovery Committee that was convened in the spring, the East Hampton and Montauk Chambers of Commerce, and business owners, "the vast majority of whom are operating responsibly. Because we've had this direct outreach, everyone knows what the rules are. For something like this to occur is flagrant. If we can't get compliance, we will have to take more severe action."

A "tremendous amount of overtime" was expended over the weekend, Chief Sarlo said, as the department fielded "call after call after call." His department is communicating with state officials, he said, to "set a game plan moving forward."