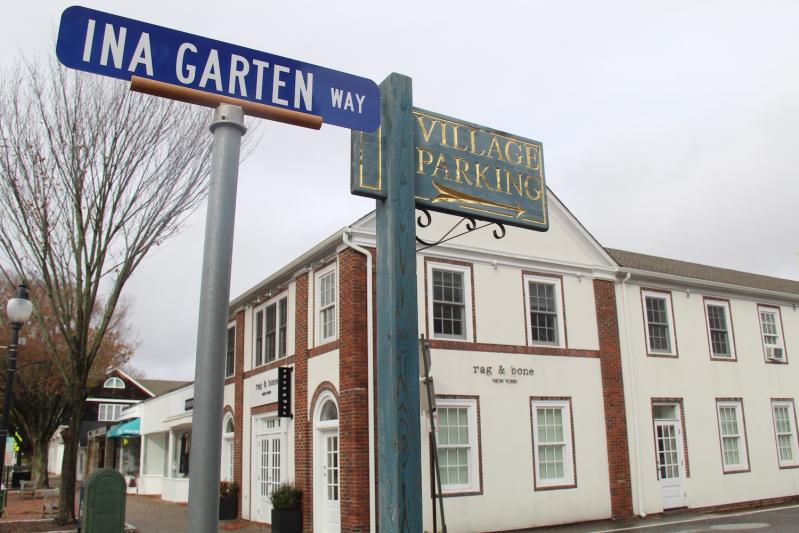 The Village of East Hampton will name the stretch of Barns Lane that intersects Newtown Lane, between Capital One and the Rag & Bone Clothing Store, Ina Garten Way in honor of Ms. Garten. Barefoot Contessa, her famous store, was located where Rag & Bone now operates. Barefoot Contessa closed permanently in 2004, but Ms. Garten still owns the building.

The move was announced during a live taping of “The Drew Barrymore Show,” which aired yesterday on CBS. During the show, Mayor Jerry Larsen presented Ms. Garten with the surprise proclamation.

“She made East Hampton her home. She had a business here for 20 years, employed a lot of local people, and people came to East Hampton to look specifically for her store. She’s brought a lot of business into the village,” Mayor Larsen said in a phone call.

“The honorary name change will last forever. We’re not changing the name of Barns Lane, that will remain," he said. But Ina Garten Way will be a secondary name for it. "It’s a really nice tribute for a successful woman who has always had East Hampton Village at the top of her list.”

Mayor Larsen said the village is looking to “historically remember” other roads and buildings in the village as well.

“The old police station and fire department was at 17 Newtown. Village Hall was at 27 Main Street for many years. With the landlord’s consent, both will receive plaques to note their significance. Chanel used to be Oddfellows Hall. A lot of early village meetings were held there. We’d like to enrich the experience of walking around the village and give people a sense of the historical significance of the place.”

In addition to many streets honorarily named for past mayors, last year an alley was named for Hugh King, the village historian.

This article has been modified from a previous version and the print version to correct the name of the street in a quote from the mayor.