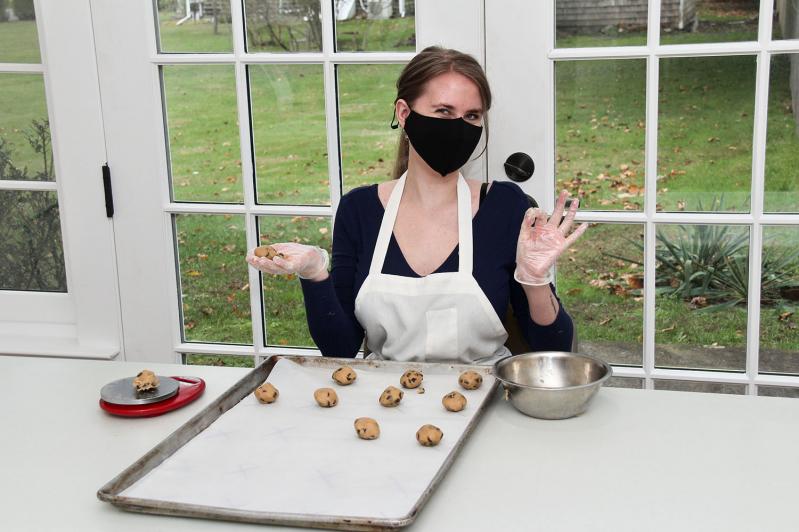 In the year B.C. (before Covid), the South Fork Bakery supplied 50 stores and at least eight farmers markets with cookies, brownies, blondies, pies, and other sweet treats. Now the nonprofit bakery works with just 30 stores and four farmers markets, but is striving to continue its core mission: to offer meaningful employment to adults with disabilities.

"The bakery is responsible for who I am today. It's a true success story and it is the greatest thing I have ever done," said Scott Beinecke, one employee.

Owned and founded by Shirley Ruch, a Sag Harbor speech-language pathologist who works with children with a range of learning and developmental disabilities, the business gives jobs to young adults 21 and older (some her former students) who often have no place to go for work once they've gone through the school system on the South Fork.

"They have all dealt with much disappointment and frustration in their lives because of their challenges, so to witness them feeling confident and comfortable doing their job is gratifying," Ms. Ruch said.

At the bakery, which rents kitchen space in the Amagansett Presbyterian Church's Scoville Hall, she offers training to workers with autism, attention deficit disorder, central auditory processing disorder, and other special needs. Her team includes Doreen Green of Springs, a retired special education teacher, and Jessica Taccone, a private chef who owns the Complete Burger, a vegan, gluten-free burger company, who help to oversee another 15 employees. Volunteers, including parents like Eleni Prieston of Sag Harbor, whose son was a bakery employee, also lend a hand.

"There are many jobs at the bakery: mixing, rolling, and measuring dough, packing in bags, sealing, selling at farmers markets," Ms. Ruch said. "Everyone starts out with a job they are comfortable doing and then is encouraged to try more challenging jobs. Each time they try something new and succeed, you can see the satisfaction and boost in confidence they feel in their faces and some even verbalize how proud they are of themselves."

Founded in 2016, the bakery became a nonprofit in December 2018, and the ability to raise money from donors has been especially important now that sales are down. "The community has been so supportive," Ms. Ruch said recently.

The bakery has been operating out of Scoville Hall since 2017. After closing down between late February and June 15, Ms. Ruch and her crew have been back at it three days a week, preparing baked goods sold at farmers markets, in gift baskets online, and at such spots as Goldberg's, the Taste of New York, Balsam Farms, the I.G.A., Java Nation, One Stop Market, and the Hampton Coffee Company.

In the Covid era, procedures are different. Added to the gloves that were already required, bakers keep a six-foot distance and wear masks while working. One employee's mother made masks decorated with cooking themes and illustrations of utensils.

Not only do trainees bake, they also learn what it takes to get a product from the kitchen to market. In a work and packing room, where they roll out and measure dough, they also bag six-packs of chocolate chip cookies, brownies, and blondies, and box up pies. Deliveries are made on Thursdays and Fridays, and three of the workers help to handle these, too.

"They are reliable and show up for work each day," Ms. Ruch said. Three of her young employees "have taken the food handler's course and gotten their certification," she said.

Ms. Ruch has given her special needs trainees "the gift of employment" and one result, as Jon Irwin said, is "I get great satisfaction making products that others love."

Donations to support the South Fork Bakery can be made online at southforkbakery.org. After a tough year, the bakery has been so busy this season that it has stopped taking online orders for the holidays, but those who like to plan ahead can place orders for mid-January or even Valentine's Day. Ms. Ruch's GoFundMe campaign, the South Fork Bakery Resilience Fund, had raised nearly $23,000 as of Tuesday.