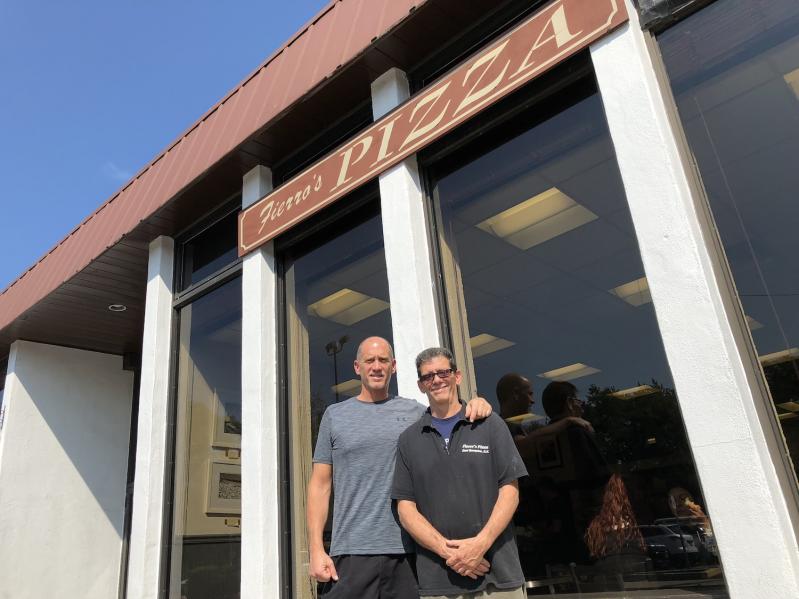 “You don’t have many towns like this,” John Fierro, left, said of East Hampton, where he and his brother, Al, right, have operated Fierro’s for 35 years.
Carissa Katz
By Carissa Katz

There is almost never a time when Fierro’s isn’t busy, and if you’ve been there, you can understand why.

The pizzeria, which celebrates its 35th anniversary in East Hampton this week, has survived and thrived not only on the strength of its popular pies — served 362 days a year — but on the amicability of its owners, John and Al Fierro.

The brothers helped their late father, Albert, open the place when they were 22 and 25. They have been behind the counter ever since.

“This is the only job I ever had,” John said on Friday, during a quieter time between the lunch and the dinner rush. “Me and my brother have spent more time in this building than anywhere else.”

To them, this anniversary is less about what Fierro’s has done over three and a half decades than it is about the customers who have kept it in business. “We just want to thank everyone for giving us the years that they’ve given us,” Al said.

“We give them a service and they give us a lifetime of memories,” John said.

Fierro’s has done the same for its loyal customers. Kids who stop in with their parents for a quick bite before a Little League game come in at 12 with just enough pocket money for a soda and a slice and grow into teenagers who make Fierro’s an after-school pit stop and homework spot. “Kids are very respectful to us,” Al said.

The brothers look out for them and keep them in line, spotting them a buck or two when they’re short. “Kids come in and even if they don’t have enough money, they have enough,” John said.

“When a kid likes the food, they bring in their parents,” he added.

“The kids are our best advertisement,” Al said.

Teenagers go off to college, then they’re back in for a slice when they’re home on break, and eventually they’re on their own, married, and taking their children to Fierro’s. “There are people who this is the first place they stop when they come into town,” Al said proudly.

In a village where few downtown businesses can claim the same longevity, 35 years is quite an accomplishment, made possible largely because Albert Fierro had the foresight to buy the building back in the 1980s.

The older Mr. Fierro had worked for Union Carbide, which was relocating from Long Island to Connecticut. “Dad always had a desire to go into business,” John recalled, but was new to the pizza trade when he opened the first Fierro’s in Farmingville in 1979. Al had learned on the job at a pizza parlor in Northport and helped his father get things started. A pizzeria in Shirley followed, and then came the spot in East Hampton.

“When we first got the store, we didn’t know much about the town,” he said. “We fell in love with it and we wanted our kids to be here.”

The whole family moved east not long after opening the East Hampton Fierro’s, though they continued to run all three pizzerias for 10 years.

The village has changed a lot since they arrived. “There are maybe five or six places that are still here,” Al said, remembering the early days when Villa Italian Specialties was on Main Street and kids could while away hours shopping in Penny Lane a few doors down from that. “A lot of the mom-and-pop or generational family stuff is no longer here.”

“Unfortunately, it’s becoming corporate, which is sad,” John said. “It saddens me that the mom-and-pop stores are getting pushed out.”

And yet, while the veneer is glossier, there is something at the heart of East Hampton that has remained the same, the brothers said. When local people need help, “the community has stepped up,” John said. “That’s one thing that’s really impressed me about this town. . . . It’s the everyday people that make it.”

“You see change everywhere, but East Hampton is still basically a phenomenal town,” he said. “You don’t have many towns like this.”

In any town, a pizza place is a great leveler. You can be rich or poor, a celebrity or a regular Joe, a kid or a granny and still call it your own.

When kids call their parents, “No one ever says, ‘I’m at the pizza place,’ ” John said. “They say, ‘I’m at Fierro’s.’ ” There is something especially gratifying about that.

It’s an eatery, yes, but also a community hub, an institution. Lives unfold over slices and garlic knots.

“There are so many stories,” Al said.

Thinking back, they can’t help but recall “the people we lost,” John said.

“Some of the younger tragedies were especially hard,” Al added. “Everyone mourns.”

He remembered the week of 9/11. “It changed how I thought about life out here. I saw how the city people came out here and almost felt like it was a little safe haven.”

After one hurricane, the power was out all over the village, but the gas pizza oven worked, “so we grated cheese by hand and were parking our car so the headlights would shine in the window” and light the place up, John remembered.

Fierro’s has its share of famous customers, but even when they’re impressed by who walks through the door — Alex Rodriguez, for example (they’re big Yankees fans), or Dudley Moore way back when — the brothers never make a big deal of it. “We want them to be comfortable here; we want their kids to feel comfortable,” Al said.

“People come in to talk sports,” John said, or to just shoot the breeze. The key, he said, it to keep it light. “We just get involved in fun things to talk about. . . . Our dad always said your everyday life is what you make it. . . . I consider this work, but we make the best of it. We have fun.”

And while a lot has remained the same at Fierro’s, plenty has changed. Back when it first opened, there were just four or five different pizza offerings. Now there are at least half a dozen specialty pizzas on the counter at any given time and a full menu of other choices. When people ask what’s good, John tells them it all is. “If it’s on the counter, it’s good, it sells.”

John now spends his winters in Arizona while his older brother runs things year round. They each have a grown son and grown daughter and wonder if there’s a chance they might take over the business someday.

“It’s a grind, but it’s a good living,” John said. “Whoever makes money in this business, they deserve it.”