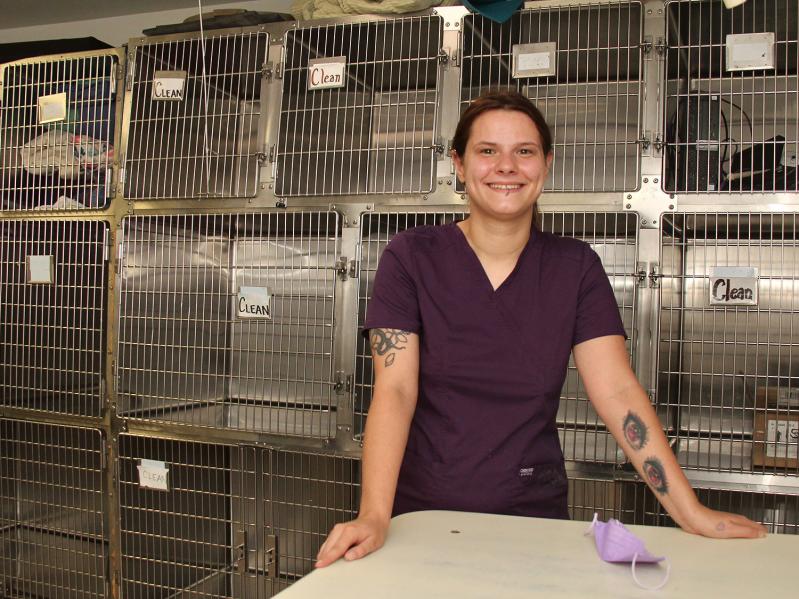 Molly Scheider, seen here at the East Hampton veterinary practice where she works, has overcome numerous health challenges to get to where she is today.
Durell Godfrey
By Christine Sampson

Molly Scheider of Springs is a rather sunny person these days. She loves her new job at an East Hampton veterinary practice, cares for her own pets, volunteers at a food pantry. She is preparing to enter Suffolk Community College in the fall and working on a creative writing project inspired by her favorite song lyrics.

But it wasn’t always that way for Ms. Scheider, a Pierson High School graduate who spends a lot of time and energy managing major depressive disorder, anxiety, and attention-deficit/hyperactivity disorder — a debilitating combination of disabilities that prevented her from thriving. She said she always assumed she “would kind of die off somehow.”

“When I got into my early 20s, I was grasping around out of the darkness because I never prepared myself to make it to that point,” she said in an interview. “I never planned to live past 18, and here I am at 27.”

Things started to turn around when her older brother, Christian Scheider, and administrators in the East Hampton School District connected her with Career and Employment Options, Inc. (C.E.O.), a Hauppauge company that provides job counseling and training, internship placement, and other support services for people with disabilities. Its motto is “employ America inclusively.”

Hers is the kind of success story that Nicholas Villani, the chief executive officer and founder of Career and Employment Options, hoped to foster when he established the company in 2005.

Ms. Scheider “was outside of the school oversight but needed assistance to develop a career direction,” Mr. Villani said. “Right from the start I knew she was a force of nature.”

She had “more energy than most,” he recalled, “and was incredibly engaging and, more importantly, a smiling, happy person. I sat with her for over an hour and decided that I needed to marshal all the resources I could.”

Ms. Scheider’s journey included mental health treatment along with counseling and training with ACCES-VR, a state agency that also offers resources to support independent living. She was placed in an internship with Dr. Jonathan Turetsky at his practice, the Veterinary Clinic of East Hampton, and that led to her current part-time job there.

Working in a veterinarian’s office was “a big, scary change for me,” she said at a C.E.O. event in June. “It had been years since I last worked, and all my previous jobs had been in retail. This is a very different working environment and I feel proud of the contributions I’m making to my community.”

“Life is hard for all of us,” she said at the event. “Disabilities and mental illnesses can make life even harder, especially when we don’t have strong support networks to help us navigate complex systems and when we live in places that don’t have a lot of resources.”

Together with dialectical behavior therapy, a form of mental health care referred to as D.B.T., and a daily routine of affirmations and other self-care methods, Ms. Scheider said she is thriving. “It’s a lot of working on your own brain,” she told The Star.

According to a study published in 2020 by Rutgers University’s School of Health Professions, about 11.4 million people in the United States are disabled because of a mental illness, “and up to 90 percent are unemployed, with about three million that are dependent on public assistance.”

“It’s not going to go away,” Ms. Scheider said of her mental health diagnoses, “but you can make it easier with D.B.T. and having a support system.” She said she is also grateful to her fiancé, Ryan Rawleigh, and her transition coordinator, Christina Carroll, for their encouragement.

At Suffolk Community College, Ms. Scheider will study for her full veterinary technician’s license. She is also starting her own pet-sitting and dog-walking business.

“The challenge in healing is just as hard as when you were traumatized, just as nitty-gritty,” she said. “It will take you back to places you never really wanted to go back to, but in the end, you come out stronger for it.”

Mashashimuet Park's History and Future
A Conference for Young People to Create Solutions
Get Outside, Get Moving
END_OF_DOCUMENT_TOKEN_TO_BE_REPLACED