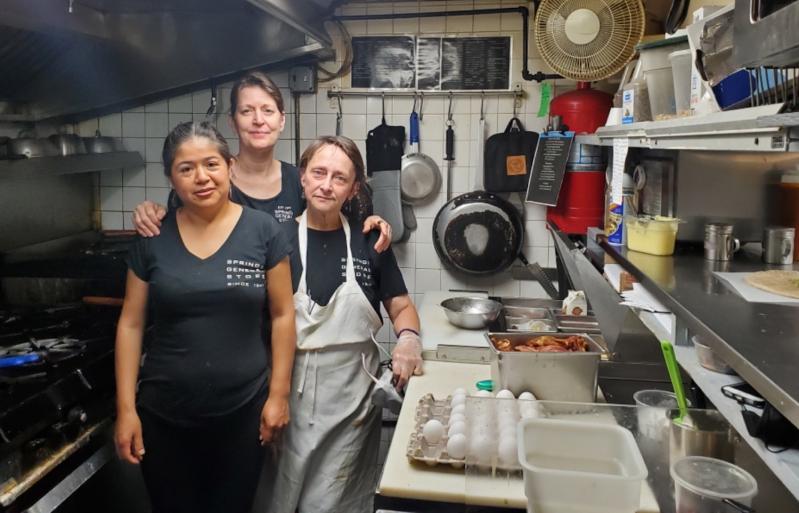 Kristi Hood, center, in the kitchen of the Springs General Store with Aida Camas, left, who does baking and the salads, and Jenny Ellis, who oversees croissants and cookies
Debi Baker
By Christopher Gangemi

Situated between the Springs School and the Pollock-Krasner House, down the block from Ashawagh Hall and the Springs Community Church, and just up the bank from Accabonac Harbor, the Springs General Store is the unofficial center of the hamlet, a place where people flock for breakfast on weekends or coffee and camaraderie on weekday mornings, and where children head after school for a bag of candy or three cookies for $3.

The property is not perfectly landscaped, nor particularly fashionable, but it is deeply loved, and its influence extends far beyond Springs. It's an autumn sweater of a store, comfortable and consistent through the years.

Kristi Hood has owned the business for the last 17 years, but she's not happy with that description. She sees herself more as its protector.

"It's a very emotional thing. When the property was put up for sale, what I told everyone was that in a business like this, you are merely a steward," she said. "Our plan was to put up a timeline of all the different owners since the beginning, to help give people the perspective that we are just one of many." She did not own the property.

This will be her last summer running the Springs institution. "We'll be renting kayaks, serving breakfast, lunch, homemade croissants, operating our candy bar with penny candy, and everything that people love and expect from us. Sometime at the end of August we will be closing to break down and ready the property for the new owner. That time is going by really fast," she said.

"In the last few weeks, we have cried with customers who come in. I've watched as women have become pregnant and I've seen their babies born. There are even a couple of those kids who are employees now," she said.

"We are going to miss the heck out of every single person."

Ms. Hood came into the business in her 40s. Her friend Sharon McCobb was the owner at the time, and she announced at a birthday party attended by both of their daughters that she was putting it up for sale. "I told her not to say that too loud, else my partner would be tempted to purchase it," she said.

But that's exactly what happened.

Ms. Hood has worked in the restaurant industry since age 19. When her children were very young, she worked as a private chef. This gave her the flexibility to be a parent and make some money. "The plan had been once they were in school full time, we would look at a little business. Both of my daughters went to Springs School down the street. I live directly over the store. I raised my kids here."

"For me the biggest gift is that I was able to be an active part of the community in a way that one person cannot always be," she said. "I did not expect it to become what it's become. I'm from California. I'm an outsider. It gave me a way to reinforce that the store is a gathering spot, a community center for the area."

Springs General would hold fund-raisers for the food pantry, help teachers with special events. When local parents asked if the store could offer lunches to the Springs students, Ms. Hood listened. "It's been a wonderful give and take between us and the community," she said.

At 62 however, she started to think about what would come next. One of her daughters has moved to Austin, Tex., "and never wants to see snow again in her life." Her younger daughter will soon be in college. "In order to be able to take something out of the business and start something fresh, we were advised to put it up for sale," she said.

After speaking with the women who have worked for her for over a decade, Jenny Ellis, who does the croissants and cookies, and Aida Camas, who does baking and the salads, Ms. Hood approached the landlord. "Guy and Ann Roberts made a huge investment in the building and supported me. When I told them I wanted to sell, they said, 'We don't want to do this without you, so we're going to put the property up for sale.' "

The sale of the store closed last week. "John Bennett, the new owner, had an arrangement with the landlord that he would be able to apply for permits before the purchase of the store was complete." He plans on transferring the operation of the store to his son and his son's business partners, and has an application before the East Hampton Town Planning Board to sell organic wines out of an outbuilding on the property, rather than renting kayaks there. He has also applied for a liquor license to allow on-site consumption of alcohol. Some have balked at the notion that he plans to turn the general store into what he described at a planning board meeting as "a little bit more of a higher end purveyor," worrying that the welcoming feel of the place will be gone when Ms. Hood leaves.

She doesn't think so. The Bennetts, Ms. Hood said, are a local family. "They're not a family that's going to disappear at the end of the season. They're going to make substantial investments in the property. People are going to come into the store and help shape what it will become. That's what they did with us," she said.

"I'm counting on someone to be after me, I want it to be here long after I'm dead and gone. I love it. Sometimes the best way to allow something to move forward is to not be a part of it," she said.

For now, she's there until the end of the summer, "doing business as usual."