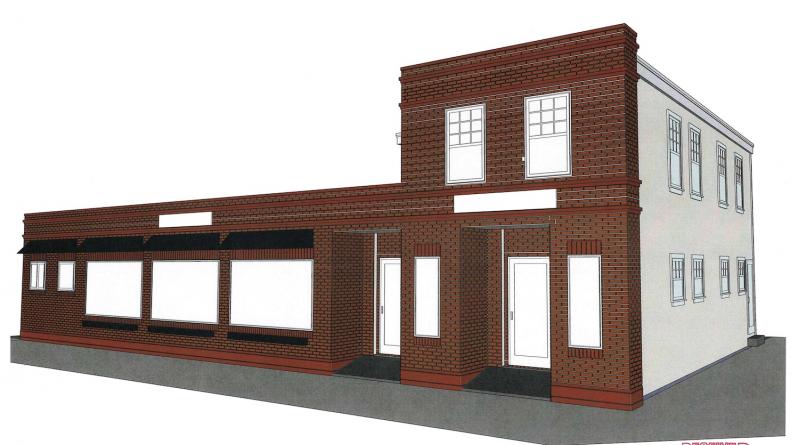 A rendering of the new building to be constructed at 106 Newtown Lane in East Hampton.
Brian Stanis for Cooper Construction
By Christine Sampson

Construction is under way at 106 Newtown Lane in East Hampton Village, where a new retail store, office space, and two-bedroom apartment are planned on the site of the former East Hampton Cleaners, which closed at the end of 2018.

The demolition of the old building on April 22 followed nearly a year of coordination with utility companies and extensive testing for lead, asbestos, and other pollutants, according to Thomas Cooper, whose East Hampton construction company is doing the work.

It’s too early to predict who the tenants will be at this point, Mr. Cooper said this week, but during a village design review board meeting in March of 2021, he had initially suggested an ice cream shop or candy store that would appeal to kids and teens walking home from the local schools. The apartment, for which a transfer of development rights took place with East Hampton Town, would be rented to a qualified tenant in the town’s affordable housing program.

Mr. Cooper’s construction crew is bumping up against supply-chain issues only minimally, he said, since “we were pretty proactive” about planning and ordering materials.

During a design review board discussion on March 16, 2021, the previous building was described as “quite dilapidated.” Ann Duffey, a board member, said its “total teardown” would be “an opportunity to enhance that section of the village.” The board approved the project about two months later.

The new building will occupy the same general footprint as its predecessor and will incorporate brick and stucco, “pretty much materials that you’ll find on any other building down in the village,” Mr. Cooper said this week.

“We’re happy and hopefully everybody that sees the final product will be happy, too,” he said.